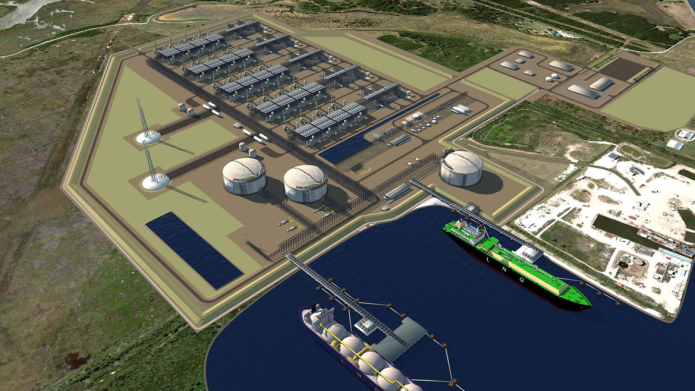 Driftwood LNG is a proposed LNG export terminal in Calcasieu Parish, Louisiana sponsored by Tellurian Inc. The proposed 96-mile Driftwood LNG Pipeline, also sponsored by Tellurian Inc., would supply gas for the project. In March 2022, initial construction activities started on the project’s first phase, which is expected to cost at least USD 12 billion, although a final investment decision had not been taken and project financing was not secured.

Shell and Vitol terminate their purchase contracts with Tellurian

Tellurian to focus on finding equity partners for Driftwood LNG

The Driftwood LNG terminal, if fully realised, would have the capacity to produce and export 37 billion cubic metres of LNG every year, which is at odds with calls from international climate organisations such as the UN’s Intergovernmental Panel on Climate Change to reduce global LNG exports this decade to mitigate global warming. The Driftwood LNG terminal is also located in an area of Louisiana in which there are pre-existing air quality issues, according to data from the US Environmental Protection Agency.

LNG export terminals are capital-intensive, financially risky and environmentally destructive. Financial institutions involved in these projects share responsibility for the impacts of these facilities. These impacts span people and ecosystems: communities around the terminal site, communities at the point of extraction and communities along pipeline routes.

By financing practices that are incompatible with a climate-stable future, the financial institutions involved threaten global agreements to address climate change. Therefore, Goldman Sachs and Société Générale, should withdraw their involvement as financial advisors to this project, and other banks should not provide project financing.

The Driftwood LNG terminal is sited in an area with pre-existing air quality issues, according to data from the US Environmental Protection Agency (EPA). The EPA’s EJSCREEN tool finds that the area within a three-mile radius of Driftwood LNG has EPA environmental indicators for fine particulate matter (PM 2.5), air toxics cancer risk, and respiratory hazard index that exceed the national medians.

Driftwood, like all LNG export facilities, would pose an immediate danger to the surrounding community. These terminals flare and vent noxious chemicals into the air, pollute nearby water sources, and can cause deadly accidents.

The life cycle emissions from the Driftwood LNG terminal have been estimated to be 143 million tonnes of CO2 equivalent, evaluated on a 20-year timeframe, which is equivalent to the annual emissions of nearly 40 coal plants.

Shell and Vitol terminate their purchase contracts with Tellurian

Following the failure of a US$1 billion high-yield bond sale earlier this month, Driftwood LNG promoter Tellurian has also seen Shell and global energy trader Vitol terminate their purchase agreement contracts for a total of 6 million tonnes per annum (mtpa) of LNG from its proposed export terminal facility in Louisiana. One agreement, with the commodity trader Gunvor, remains active for 3 mtpa of LNG. As a result, the company’s outspoken co-founder Charif Souki has recognized the need for a rethink of the company’s business model and accepted that Driftwood will be further delayed. In his latest YouTube video, Souki urged investors to now consider Tellurian “a solid American production company with very real domestic prospects”, with the ability to sell LNG globally as a “Holy Grail”. (GEM.wiki)

Tellurian to focus on finding equity partners for Driftwood LNG

Tellurian will now focus on finding equity partners for its Driftwood LNG export project in Louisiana after it withdrew a senior notes offering, according to the firm’s co-founder and executive chairman, Charif Souki. Due to uncertain conditions in the high-yield market, Tellurian withdrew the offering that would allowed the firm to stay on schedule to deliver LNG from Driftwood in the first half of 2026. Souki added that the company would continue with its plans, but staying on schedule would become “more difficult”.

The overall cost for the project is estimated at USD 30 billion. A final investment decision for the project has yet to be taken and project finance loans have not been secured.

The project's financial advisors are Goldman Sachs and Société Générale, and the hoped for financing package would involve USD 7 billion in capital from the project partners and USD 20 billion in project finance debt for overall costs (IJGlobal).

In May 2019, the Swiss bank UBS provided Tellurian with USD 75 million in loans (one year tenor) for the project (IJGlobal). Credit Suisse said in April 2022 that it expects project financing for Driftwood to be finalised in the “coming months”, involving a combination of convertible preferred equity and debt.

In June 2022, Tellurian issued US$500 million in senior secured convertible notes. The following month, Tellurian announced it would release additional notes and make a public offering to raise funds for the project.

Tellurian Inc. is the owner of the Driftwood LNG project and the associated Driftwood Gas Pipeline

Contracted for the engineering, procurement, and construction of the Driftwood LNG project

How Long Does it Take to Build an LNG Export Terminal in the United States?

Campaign website providing information about the potential and present risks of the Driftwood LNG terminal.

Gas, mostly derived from fracking, is piped to the US Gulf coast, supercooled and compressed into a liquid – liquefied natural gas (LNG). Across North America, following an initial build out of several LNG export terminals, companies are planning to build a second wave of up to 20 terminal expansions and new terminals, including the new Driftwood LNG terminal. Tellurian filed an application to the Federal Energy Regulatory Commission in 2017 which has been approved. In 2018, the company announced that Goldman Sachs and Société Générale would act as financial advisors for the Driftwood LNG terminal and, in 2019 Tellurian secured an initial USD 75 million loan for the project from Swiss bank UBS.

In June 2020, Tellurian confirmed that the construction start for the Driftwood terminal would be delayed until 2021 and further disclosed that LNG production at the terminal would also be delayed until the end of 2024, with full operations expected by 2026 or 2027. The company’s difficulties in securing partners for the project along with a global downturn in LNG prices, which was exacerbated by the Covid-19 pandemic, were cited as reasons.

In the summer of 2021, Tellurian announced three 10-year sale and purchase agreements (SPAs) with commodity trader Gunvor Group, the global energy trading business Vitol and Shell, with each SPA involving approximately four billion cubic metres of LNG per year. Also in July 2021, Tellurian said that it had terminated a stock purchase agreement signed in 2019 with TotalEnergies which would have seen the French energy giant invest up to USD 700 million and take up to 2.5 million metric tons of LNG per year from the Driftwood LNG terminal. The termination of this agreement was thought to be due to Tellurian’s failure to reach a final investment decision (FID) for the project. A summer 2021 report found that the Driftwood project “looks extremely likely to go ahead next year.”

Securing financing for the project from banks and other investors has remained challenging as Tellurian’s SPAs are for 10-year terms rather than the 20-year contracts which underpinned the first wave of US LNG terminals, according to an August 2021 report by the Institute for Energy Economics and Financial Analysis. The report additionally noted that Tellurian also needs to acquire about 1.5 billion cubic feet per day of upstream gas production to feed the facility. Tellurian has said it will not proceed with a FID for the project until it secures sufficient upstream reserves – about 1.5 billion cubic feet per day – for the first phase. The company currently expects to have only 100 million cubic feet per day in production by the end of 2021 from its drilling program in the Haynesville Shale. Construction activities reportedly began in late March 2022, even without having reached FID by that date.