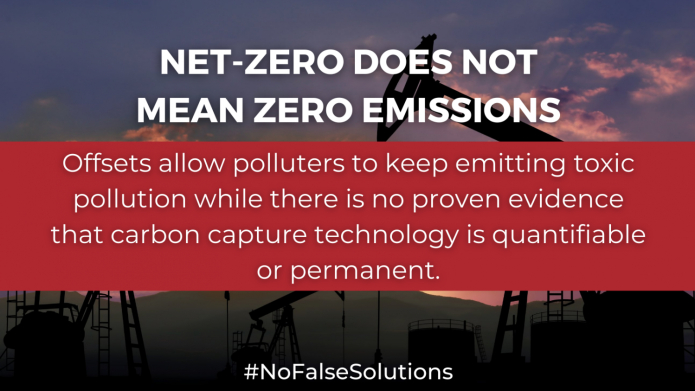 Carbon offset programs are increasingly prevalent in corporate and governmental climate change plans. United States Senators Joe Manchin (D-WV) and John Barrasso (R-WY) proposed legislation last week to establish a nationwide reforestation effort that would involve the sale of carbon offset credits, while tech company Amazon recently announced its own offset program in the Amazon rainforest. Carbon offsets are expected to be a major point of discussion at the upcoming COP26 climate talks in Glasgow, and countries and firms are releasing "net zero emissions" commitments in the interim which forgo necessary emissions reductions in favor of offsets.

Policymakers and businesses alike must reject carbon offsets if they are committed to climate justice. Environmental and human rights groups across the world are opposed to carbon offset programs because:

"Carbon offsets give the worst polluters in the world a free pass to keep polluting and exploiting, so it's no surprise that offsets are a favorite of corporations and the politicians they've bought," said Roshan Krishnan, Climate Finance Campaigner at Amazon Watch. "Offsets are a disaster for climate justice and Indigenous rights in the Amazon and across the world. As COP26 approaches, we demand immediate emissions drawdown and protection of Indigenous land rights, not market-based delay tactics and deception."

"As pressure builds on financial institutions, consumer brands, and governments to act on climate, they are turning to carbon offsets as opposed to enacting real changes to reduce real emissions from their business activities," said Pallavi Phartiyal, Deputy Executive Director at Rainforest Action Network. "For example, many corporations that are the biggest polluters in the fossil fuel sector are looking to use forest offsets to achieve their net zero targets. This has not worked and will not work."

"Carbon offsets are a distraction, not a solution," said Gar Smith of Environmentalists Against War. "Picture a massive, offshore oil spill. The proper response is to stop the leak at its source. The "offset" solution is to deploy oil-trapping booms and coastal clean-up crews—all while the oil continues to pour into the ocean."

"Offsets are nothing short of a scam that corporate interests push, allowing them to continue polluting our climate and frontline communities with impunity. The harm does not end there, as these offset schemes displace indigenous communities and prop-up corporate agriculture and factory farming," said Jim Walsh, Senior Energy Policy Analyst at Food & Water Watch. "Addressing the climate crisis means keeping fossil fuels in the ground, rather than pursuing these scams that harm our communities and climate for nothing other than corporate profits."

"Politicians in cahoots with polluting multinational corporations on false solutions like carbon offshoots are shameful," said Maura Stephens, a cofounder of the Coalition to Protect New York in the USA. "They are selling out their own people. And that's foolish, because the effects of climate change will hit them personally, and those they care about, if they haven't already, and they won't be able to buy their way safe. No one can."

"More and more people are learning about the scam behind carbon offsets, which are nothing more than a literal industry smokescreen," said Mary Finneran, a cofounder of Frackbusters in the United States. "The people will not be fooled. Stop this deadly spin and implement immediate action to stop all new fossil fuel projects, phase out existing ones, and ensure a just transition for affected workers and communities. Period. No more phony distractions."

"Carbon offsets are just the latest version of commoditizing and outsourcing negative externalities," said John Peck, Executive Director of Family Farm Defenders. "These ‘pay to play' schemes mean that poorer marginalized communities will be dumped on by richer privileged ones. U.S. family farmers particularly resent being used by transnational corporations as supposed "beneficiaries" of these "false solutions" to climate change. Small farmers already feed the world and cool the planet through our agroecological practices for which we do not get paid from some rigged pollution market. We do not want to be part of any neo-colonial project that shifts the burden of climate injustice onto folks in the global south in order to line the pockets of wealthy elites in the global north."

"Banks need to reduce their financed emissions by categorically phasing out financing for fossil fuels and taking action on other big emitters like industrial agriculture – not by using deceitful accounting tools like carbon offsets to back their net-zero commitments without actually reducing emissions," said Marília Monteiro Silva, Forests and Biodiversity Campaigner at BankTrack.