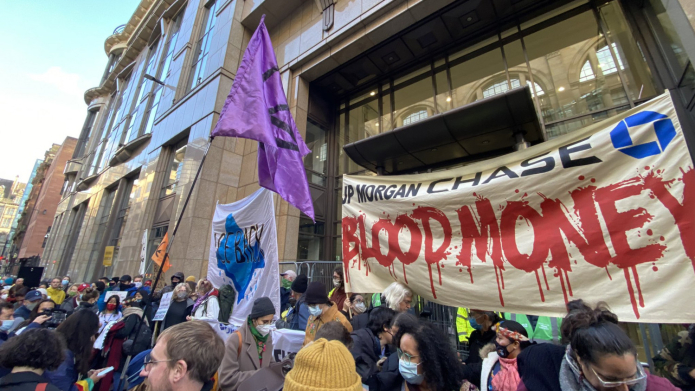 Protestors outside Chase HQ in Glasgow during COP26. Photo: Fossil Banks No Thanks

This morning, JPMorgan Chase shareholders failed to pass two key climate resolutions, voting down proposals to push the bank to end its support for new fossil fuel development and to set absolute targets for reducing its financed greenhouse gas emissions. Despite the outcome, climate activists applauded the final votes, as well as shareholder votes on unprecedented climate resolutions at other big U.S. banks earlier this year, for achieving levels of support increasingly difficult for companies to ignore in the face of a growing climate crisis.

In recent years, shareholder resolutions filed at big U.S. banks have called for firms to disclose the scale of their financed emissions and to set long-term climate targets. This year’s first-of-their-kind resolutions at six of the biggest U.S. banks — Chase, Citi, Wells Fargo, Bank of America, Goldman Sachs, and Morgan Stanley — went even further by calling for credible plans to achieve long-term targets. The resolutions echoed calls by the International Energy Agency stating that in order for the world to limit warming to 1.5 degrees Celsius by 2050, “there is no need for investment in new fossil fuel supply.”

The first proposal, filed by Harrington Investments and Mercy Investment Services, which received 10.9% of the vote, asked Chase to align its lending practices with its public net-zero commitment by ending support for new fossil fuel development. The same resolution received between 11 and 13 percent support from shareholders at Citi, Wells Fargo, Bank of America, and Goldman Sachs. (Morgan Stanley’s shareholder meeting will take place next week.) The Sierra Club Foundation and other investor members of the Interfaith Center on Corporate Responsibility (ICCR) filed those resolutions.

The vote total suggested that major asset managers like BlackRock and Vanguard  — which are the largest shareholders of the big banks, meaning they are uniquely positioned to make a huge impact on important votes — failed to support them, despite their own net-zero commitments and pledges to use shareholder power to advance climate action.

“The continued support for these first-of-their-kind resolutions pushing Wall Street to deal with its climate problem sends a clear signal that this issue cannot be ignored, and the pressure will only grow stronger. As the world’s biggest financier of fossil fuels, JPMorgan Chase has a responsibility to address its massive contribution to the climate crisis, and to protect its shareholders from climate risk by ending its support for fossil fuel expansion,” said Ben Cushing, campaign manager for the Sierra Club’s Fossil-Free Finance campaign. “It is disappointing that asset managers like BlackRock and Vanguard once again failed to use their immense power to hold banks accountable to their climate pledges. The rhetoric coming from these big investors about climate leadership is worthless if it's not paired with action to hold clients accountable to making the clean energy transition a reality.”

The second proposal, filed by the Sierra Club Foundation, which received 15.2% of the vote, requested that Chase set absolute targets for reducing its financed greenhouse gas emissions. In 2021, Chase set emissions intensity targets for 2030 for its financing of oil and gas, electric power, and auto manufacturing. Chase’s emissions intensity target is still compatible with an expansion of fossil fuels, and an overall increase in financed emissions. Other big banks like Citi and Wells Fargo have set absolute emissions targets for oil and gas sector financing, acknowledging that these targets are necessary to meet the goal of net-zero financed emissions by 2050. The vote total suggested that major asset managers failed to support the resolution.

“Despite acknowledging the need to address its climate problem, JPMorgan Chase remains far behind its peers in setting weak climate targets that rely on accounting tricks instead of real reductions in financed emissions,” said Adele Shraiman, campaign representative for the Sierra Club’s Fossil-Free Finance campaign. “It is promising to see more and more investors supporting these common-sense, science-based resolutions calling on big banks to set absolute emissions reductions targets. But this is truly the bare minimum. It’s time forJPMorgan Chase to step up and match the climate commitments set by its peers.”

Last week, BlackRock released a new memo detailing the asset manager’s approach to voting on shareholder proposals during the 2022 proxy season and making excuses for why it would not support climate resolutions at the big banks. In the memo, BlackRock falsely characterizes the resolutions as “micromanaging,” despite the fact that they only ask banks to follow through on their own climate commitments. Chase, Citi, and Morgan Stanley requested that the SEC block shareholders from voting on these resolutions, making the same argument about supposed micromanagement, but the SEC rejected their requests.