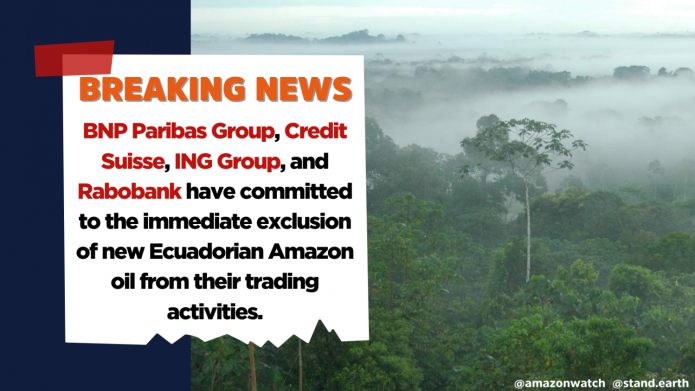 European banks BNP Paribas Group, Credit Suisse, and ING – collectively responsible for financing the trade of USD 5.5 billion in Amazon oil to the U.S. since 2009 – have committed to the immediate exclusion of new Ecuadorian Amazon oil from their trading activities, in emails sent to environmental organizations Stand.earth and Amazon Watch. The banks are expected to roll out binding policies in the coming months, with BNP Paribas already posting its commitment on its website.

This is the first time global commercial banks have adopted policies that exclude finance for extractive activities in the Amazon rainforest. These commitments represent an end to current major sources of financing for the Amazon oil trade, as these three banks were collectively responsible for over 50% of financing provided in the last decade.

These commitments come in response to the release of an August 2020 report by Stand.earth and Amazon Watch revealing how European banks financed the trade of USD 10 billion of oil from the Amazon Sacred Headwater region to the U.S. The report critiques banks for engaging in a double standard by promoting corporate sustainability commitments, while trading Amazon oil that contributes to climate change, and has direct impacts on Indigenous peoples – including a 27 November 2020 oil spill in Ecuador that impacts multiple Waorani Indigenous communities and flows downstream to a location where other Indigenous peoples live in voluntary isolation.

Nearly all of the 19 banks identified in the report as trading in Amazon oil are also members of the World Economic Forum’s "Great Reset" Initiative. Given the stated goals of this initiative and the timing of the WEF 2021 Agenda meeting this week, 25-29 January, it is critical that Forum’s leadership push members to prioritize the elimination of financing for the extraction and trading of the oil industry, both of which damage the integrity of the Amazon rainforest and endanger the lives of the Indigenous peoples who call it home.

"As climate change intensifies, these commitments showcase a growing concern from global financial institutions about the reputational risk that comes with financing the Amazon oil industry. The banks identified in our report faced serious allegations of double standards for making climate pledges while continuing to finance the trade of Amazon oil, and these new commitments are the first step toward making a significant and lasting impact on Amazon rainforest protection and respect for Indigenous rights in the region," said Moira Birss, Climate and Finance Director for Amazon Watch.

"These commitments are a big step forward and a sign that the financial community is starting to come to grips with the human rights abuses and threats to global biodiversity and climate stability from new oil development in the Amazon. Ultimately, these and other banks investing in the Amazon oil supply chain need to live up to their climate pledges by stopping the trading and financing of all oil development in the Amazon, until governments in the region commit to no new expansion and plan for a wind-down of existing production in line with Paris Agreement climate goals," said Tzeporah Berman, International Programs Director at Stand.earth.

"The decision of these banks to stop financing trade of Amazon crude from our territories is a major milestone in our effort to protect our lands, our lives, and our cultures. For too long, the oil industry has wreaked havoc on our peoples, violated our rights, felled our forests, taken our territories, and created climate chaos, which is leading to the collapse of the Amazon. The banks that finance this destruction are complicit in what is a genocidal threat for us, and an existential threat for humanity and our planet. We call on all other banks to stop funding oil extraction and trading of Amazon crude, and instead invest in sustainable economic alternatives for our countries and communities," said Marlon Vargas, President of CONFENIAE (the Confederation of Indigenous Nationalities of the Ecuadorian Amazon).

"We recognize how important it is that European banks are going to take steps to stop financing extractivism and fossil fuels in the Ecuadorian Amazon. It is a first and great step, a hope based on an action. It is a great endorsement to our law of origin that is written in the mother Amazon rainforest: natural resources are sacred, they have a function in the entire ecosystem of the largest forest on the planet, it is the blood, the joints, and bones, it is the life of Indigenous peoples and nationalities, and of every living being that inhabits it. Finally, we ask all banks and companies in the world to follow this example, but also to make it a reality in all the countries that are in the Amazon Basin," said José Gregorio Díaz Mirabal, General Coordinator for the Indigenous Organizations of the Amazon Basin (COICA).

"This has been a long road of resistance and defense of the Amazon. It is important that these European banks stop supporting businesses that violate human rights, that commit genocide and ethnocide against Indigenous Peoples, that violate women's rights, and that affect the territories that give life to the planet. The banks must generate a global conscience to save this world, and the companies that invest in fossil fuels must initiate a profound transition that protects life on this planet and our Amazon. They must see that injustices have been committed for hundreds of years, and that we are here and we are fighting, resisting, and saying that change can be made. It is possible to live without destroying the planet Earth or destroying the future of the generations to come. It is necessary that other banks follow this example," said Patricia Gualinga, Coordinator of the Mujeres Amazónicas Collective.

Following the release of their August 2020 report, Stand.earth and Amazon Watch met with bank representatives to express their concerns and the impact of oil trade financing in the Amazon. Among the impacts discussed were: oil contamination, Indigenous rights violations, oil production in Yasuni National Park, expansion plans, and climate change. Several banks have existing policies that exclude project finance for drilling in high conservation value areas like the Arctic, or restrict funding of extreme fossil fuel projects such as tar sands, including BNP Paribas’ unconventional oil & gas sector policy. Yet, banks were not applying the spirit of the standards to their trade finance side of its business, nor recognized the ecological and climate importance of the Amazon biome or the rights of Indigenous peoples there.

"We have ... completed the review of our exposure to the trade of crude from the Ecuadorian or Peruvian Amazon, and decided to phase out trade finance services for the export of such crude oil. Existing commitments are being completed, but no new transactions involving the trade of crude oil from the Ecuadorian or Peruvian Amazon are being executed going forward," said Credit Suisse in an email from December 28.

"We are researching our exposure to the trade in the region; we are engaging with any clients who could be linked to the issues and area; we have declined any new proposed transactions and therefore new business in trade linked to oil & gas in Ecuador," said ING in an email from December 10.

Other top banks financing the trade of Amazon oil also responded to the report. Rabobank told Reuters "it had stopped financing Ecuadorian crude cargoes earlier ," and communicated to Stand.earth and Amazon Watch the financing "violated our existing policies that prohibit activities in World Heritage Sites or high conservation value areas." UBS told Reuters, "it already had declined some crude oil transactions from the region due to concerns about indigenous land rights." However, UBS has yet to make any firm commitments to ending its trade financing for Amazon oil, including oil from controversial blocks in the Peruvian Amazon known to be home to uncontacted Indigenous peoples.

Another one of the top six banks, Natixis, told Reuters it would look into the concerns raised in the report, but Stand.earth research showed that it was the only bank among the top 6 to make any trades in Amazon oil after the release of the report. Natixis provided trade financing for 5.5 million barrels of Amazon oil from Ecuador from July to December 2020, more than double the volume it financed in the first half of the year. This is despite the company being named the "most innovative investment bank for climate and sustainability" in 2018.

Stand.earth and Amazon Watch will release an updated scorecard in the second quarter of 2021 on the performance of all the financial actors identified in their joint report and Amazon Watch's March 2020 corporate finance report, assessing financial institutions' involvement in the Amazon oil supply chain and how their actions compare to their climate and sustainability commitments. The scorecard will include BNP Paribas Group, Rabobank, UBS, ING, Credit Suisse, ABN Amro, MUFG, Societe Generale, Deutsche Bank, Unicredit, Credit Agricole, Citigroup, JP Morgan Chase, Goldman Sachs, and HSBC. Others may be added.

"We are calling on banks to make public commitments to stop financing Amazon oil-related activities, including trade, project, and corporate finance, unless adequate remediation of contamination occurs, rights to health of local communities is guaranteed, safeguards are in place to prevent future spills, and governments in the region commit to no new expansion of oil development and a wind-down of existing wells in line with global climate goals and collective Indigenous visions for the region," said Amazon Watch and Stand.earth.

Stand.earth and Amazon Watch’s August 2020 report, European Banks Financing Trade of Controversial Amazon Oil to the U.S., exposed a range of European banks that since 2009 have provided USD 10 billion in trade financing for the extraction of approximately 155 million barrels of oil from the Ecuadorian region of the Amazon Sacred Headwaters to refineries in the U.S., with more than 40 percent of the oil going to refineries in California. This oil contained approximately 66 million metric tons of CO2, equivalent to the annual emissions from 17 coal-fired power plants.

Out of the 19 banks assessed in the report, the top six banks – ING, Credit Suisse, UBS, and BNP Paribas Group, Natixis, and Rabobank – account for 85 percent of all banks financing trade of Amazon oil, despite having policies on advancing human rights, protecting biodiversity, and climate change. The report called on banks to:

In addition, a March 2020 report by Amazon Watch, Investing in Amazon Crude: The Network of Global Financiers and Oil Companies Driving the Amazon Toward Collapse, documented the lending, underwriting, and equity investment of over USD 6 billion in oil extraction projects in the western Amazon by five of the largest banks and asset managers: Citigroup, JPMorgan Chase, Goldman Sachs, HSBC, and BlackRock. Financial institutions have supported the destruction of the Amazon Sacred Headwaters by pouring billions of dollars of investment and financing into the exploitation of the region's oil resources, and need to take their share of the responsibility for the environmental pollution and human rights violations that indigenous peoples are facing.

The Amazon Sacred Headwaters is one of the most biodiverse ecosystems on the planet and helps regulate essential planetary ecosystem services such as the hydrologic and carbon cycles. The region is home to more than 500,000 Indigenous peoples from over 20 nationalities, including peoples living in voluntary isolation on their ancestral lands. New and ongoing oil extraction in the region is a gateway to deforestation and contributes to violations of Indigenous peoples’ rights. Indigenous leaders in the region have repeatedly voiced their opposition to the expansion of the oil industry and other industrial activities in their territories.