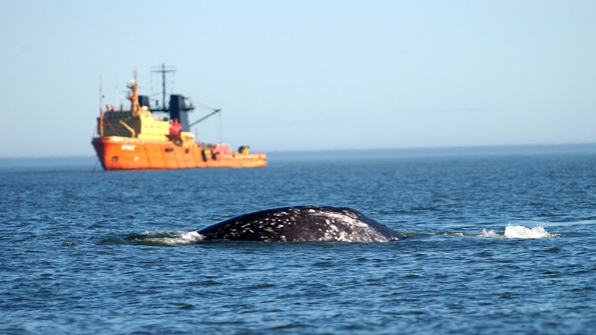 Twelve US, Russian and international environmental organizations sent a letter today to Exxon Chief Executive Rex Tillerson urging the company to re-route a proposed pipeline away from herding grounds vital for indigenous people and around a bay that is vital for a critically endangered whale population in Russia (see copy of letter below). If the pipeline is built according to current plans, two indigenous groups' livelihoods will be severely harmed and the Western Gray Whale will be further threatened with extinction, according to the groups and several independent reviews.

"Given the precarious state of the western gray whale population, a precautionary approach is essential. We suggest that it would be preferable to develop an alternative option, such as rerouting of the pipeline, to eliminate the potential for disruption of key processes of biological productivity within the Lagoon."

The environmental groups' letter to Exxon's Tillerson also challenges a proposal to build an ice dam across Piltun Lagoon to facilitate pipeline construction.  According to the letter:

...roject plans put the fish reserves and entire living ecosystem of Piltun Bay at great risk because the proposed ice bridge, which will act as a dam, will interrupt the natural water exchange between the Sea of Okhotsk and the large, northern part of the bay during the winter and spring of 2008-2009. Close to 2/3 of the bay will be artificially isolated from sea water for several months, until the summer sun finally melts the ice dam.

The environmental groups' letter also urges Tillerson to re-route the proposed pipeline away from areas used by subsistence indigenous reindeer herders.  According to the letter:

The environmental groups are challenging Exxon to change the pipeline route to avoid these impacts and in so doing decrease political risks associated with the project:

"Around the world Exxon is being challenged to be more responsive to environmental concerns.  Sakhalin I is an example of a project where Exxon can reduce project impacts while lowering project risks in this politically unstable environment," said Doug Norlen, Policy Director, Pacific Environment.

The proposed Sakhalin I pipeline, on Sakhalin Island in the Russian Far East, is proposed by Exxon Neftegas Ltd., a project operating company managed by Exxon.

The Western Gray Whale Advisory Panel includes world-class scientific experts specializing in whales and marine conservation,  The panel was established by the International Union for the Conservation of Nature to review the impacts of oil and gas projects in the Sakhalin area on the critically endangered Western Gray Whale.  Since the WGWAP's creation, the European Bank for Reconstruction and Development and the Export Credit Agencies of the US and UK have withdrawn from consideration billions of dollars in potential financing for the nearby Sakhalin II project. Among scientists, the WGWAP continues to be viewed as a kind of ‘supreme court' of scientific review of the health of, and impacts to the Western Gray Whale.