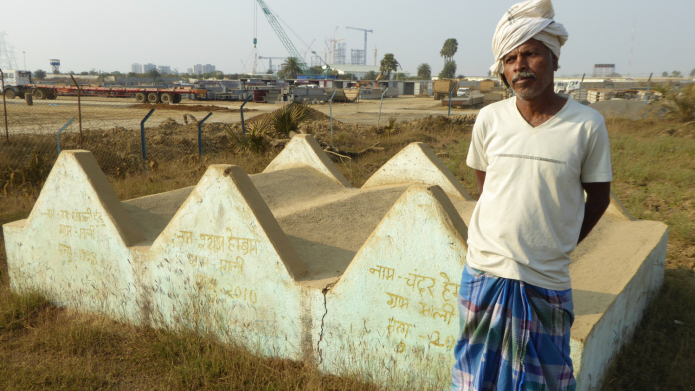 An Adivasi man stands in front of his family burial plot with Adani's power station in the background. Photo: Geoff Law/AdaniWatch

The Godda Thermal Power Project is a 1,600-megawatt coal power project under construction in Godda, Jharkhand, India. It is run by Adani Power (Jharkhand) Limited, a special purpose vehicle (SPV). The coal required will be imported from Australia, Indonesia and South Africa and will require some 7 to 9 million tonnes of coal per annum.

Coal for the port will arrive at Adani’s Dhamra port in Odisha, India. From here, the coal would be railed approximately 700 km to Adani’s coal-fired power station. One of the mines that will supply the plant coal is the troubled Carmichael coal mine (see the Dodgy Deal profile for more information).

In February 2022, Adani predicted that the power plant could start exporting in November 2022. However, according to some sources late 2023-early-2024 may be a more realistic estimate.

The Godda power project has acquired land for the development of the plant by violating land rights of the Indigenous people in the Santhal Pargana division. Besides producing pollution through the massive amount of coal burnt daily, the vast amount of water required for the operation of the plant will put pressure on water resources from the Ganges river.

Climate risks, local impacts and violation of human rights are reasons enough for banks to stop financing Adani’s operations and unviable and expensive projects such as the Godda coal power plant. This project must be cancelled and all issues around land grabbing, Indigenous rights’ violations and a lack of benefits to local people need to be resolved.

Indigenous rights and land acquisition: Godda is a district in the Santhal Pargana division of Jharkhand state, which is the hinterland of the Adivasi. Adivasis are Indigenous forest dependent communities who also practice agriculture for their survival. Santhals, an Adivasi community, form almost 34% of the tribal population in Jharkhand. The Indian Constitution (Article 244(I)) provides safeguards to these communities as they face marginalisation and exploitation. In many areas, Adivasi do not have secured land tenures, making them even more vulnerable.

The 2013 Right to Fair Compensation and Transparency in Land Acquisition, Rehabilitation and Resettlement Act was bypassed, with the state accepting Adani Group’s request for over 2,000 acres of land and declaring it to be “for public purpose”. Around 1100 acres of land has already been acquired without relevant consent procedures and neglecting laws like the Santhal Pargana Tenancy Act, which mandates a vast majority of the Indigenous land to be non-transferable by any means. Without the state intervention, Adani would have needed permission from the Indigenous farmers.

Dispossessed Indigenous farmers told Adani Watch their land was forcibly seized by the Jharkhand government on Adani’s behalf. The tactics used to acquire land between 2016 and 2018 were nothing short of bullying. At a public hearing about the land acquisition, opponents of the project were prevented from entering and protesters were assaulted by the police. The acquisition of this land threatens the Adivasi community, their livelihood and their ties to the land – spiritually, emotionally and economically. The Adivasi farmers are challenging Adani’s land grab in the Jharkhand High Court.

In total, Adani would need 1,255 acres of both privately and publicly owned land in and around 10 villages. In all, 841 families, comprising 5,339 individuals, will be affected.

Impacts on livelihoods: Adani shows a poor track record in terms of impacts of other coal power plants. Already in 2013, an independent fact-finding committee (SAPACC) demonstrated that the areas affected by the Tata Mundra power plant showed damage to mangroves and creeks, increases in noise levels, increased radioactivity near the ash ponds and a drastic reduction in fish catch. According to Ahmed Ali Illiyasa - fisherman and head of a local advocacy group of fisherfolk - fishing season ended early due to pollution and disturbance.

Health impacts: According to AdaniWatch, local doctors said that within three years of the Adani Mundra power stations commencing operations there was a 20 to 22% rise in upper respiratory-tract diseases in children. Similar impacts were observed amongst the elderly. The same effects are very likely to occur when the Adani Godda power plant is in operation.

The power plant is estimated to emit between 193.6 and 277.7 million tonnes of carbon dioxide in its lifetime with an average emission of 9.35 Mmt annually. This will significantly add to the already tremendous total amount of emission of India, being the third largest emitter in the world.

Flaws in the Environmental Impact Assessment: Adani, in its Sustainability Report of 2016-2017, only loosely assessed the environmental impact of the project. The company failed to provide the water flow and catchment details to the Expert Appraisal Committee (EAC), although the construction of such a plant will impact on the downstream flow and ecology due to water withdrawal. Adani also changed the source of water from the river Chir to the sacred river Ganges, and included the building of a 93 km pipeline to bring water to the plant. These changes alter the scope of work tremendously but this did not undergo any impact assessment.

Pollution and waste: The plant’s impacts include air pollution and water pollution due to wastewater. The Ganges river is already degraded by dams, diversions, industrial pollution, raw sewage and plastic waste, such that for almost all of its length, the river’s waters are unfit even for bathing.

Water sources: Godda is a drier region with poor ground water availability, where people are already witnessing water stress. Despite this, the project has used pumps for water withdrawal from the lands surrounding its facility for construction. The deterioration of water supply has been reported locally. The Environment Clearance clearly mentions that “no water bodies including natural drainage system in the area shall be disturbed due to activities associated with the setting up/operation of the power plant”.

Biodiversity: The meandering stretch of river has been identified as an important habitat for the Gangetic dolphin. According to the IUCN’s ‘red list’, its populations have become ‘severely fragmented’ with a total number somewhere between 2000 and 4000. The remaining dolphins are threatened by pollution, hunting, increasing boat traffic, water diversion, and fishing nets. The animal is effectively blind. It navigates and forages using echolocation. The dolphins therefore find noise from river vessels and pumping stations disorienting. Adani’s water-pumping infrastructure at Sahibganj could therefore impact the Gangetic dolphin through reducing the river’s flow and through the noise.

Climate change: It is estimated that the Godda power plant will emit between 193.6 and 277.7 million tonnes of carbon dioxide in its lifetime with an average emission of 9.35 Mmt annually. This will significantly add to the already tremendous total amount of emission of India, the third largest emitter in the world.

Financial risks: A report by IEEFA assessed that the Adani Godda coal power plant is financially unviable, given the enormous amounts of coal that need to be imported, mainly from Australia. The risk exposure is high because the plant is already burdened with large non-performing loans to coal power projects and the unalignment with the Indian energy strategy.

The power produced will not benefit the inhabitants of Jharkhand as it will be supplied to Bangladesh instead. Supporters of the project claim this will help ‘lift Bangladesh out of poverty’. However, Bangladesh is already experiencing over-capacity and will fall into a heavy burden from external loans if the power deal proceeds.

Corporate malpractice: Adani Power Limited has also been involved in a malpractice termed over-invoicing, whereby companies use intermediaries to artificially inflate the costs of imported raw material (coal import via sea route) and based on those inflated costs Adani charged higher power tariffs than were justified by their actual cost of production, thereby shifting the burden of the price on the customers.

The project is expected to cost around INR 148.2 billion (US$1.9 billion) and reached financial close in September 2019. Two state-controlled financial institutions, REC Limited and Power Finance Corporation (PFC), are together providing a US$1.4 billion loan and the promoter Adani Power is providing US$203 million in equity.

The engineering, procurement and construction contract for the project was awarded to SEPCO, an electric power construction corporation based in China, in April 2018.

The boiler technology will be provided by Babcock & Wilcox Beijing, while the turbo-generators will be designed by General Electric (GE).

Carmichael coal is not reducing poverty in South Asia

Lies, deceit, and corruption – The story of Adani and its land-grabbing tactics

Petition from Adivasis from Santhal Parganas from Jharkhand, India

On 11 August, 2015, A MoU (Memorandum of Understanding) was signed between Bangladesh Power Development Board (BPDB) and Adani Power Ltd. The project was discussed for the first time in the Expert Appraisal Committee (EAC) meeting on 29 February, 2016. Terms of Reference were Issued on 26 July, 2016, by the Ministry of Environment Forest and Climate Change (MoEF&CC) and subsequently Environment Clearance (EC) was accorded on 31 August, 2017. This Environmental Clearance was issued on the basis of water withdrawal from the river Chir.

In July 2018, Adani presented a source sustainability study for withdrawal of water from the river Ganges instead. As the Compliance report of Environmental Clearance states, Adani planned to construct the water intake and pipeline structure on the river Ganges to meet its water requirements of 36 million cubic metres annually.

The Environmental Clearance was challenged in the National Green Tribunal - an environmental court. The appeal was directed against an amended Environmental Clearance dated 3rd September, 2019, granted to Adani Power (Jharkhand) Limited by the MoEF&CC and permitting withdrawal of water from the river Ganges instead of the Chir. In July 2022, the challenge was dismissed by the National Green Tribunal after years of litigation on technical grounds of delay in filing the petition thereby avoiding the merits of the issues raised.

In 2019, the Godda thermal power plant area was declared a special economic zone (SEZ) which allows Adani to take advantage of tax rebates, faster clearances and other benefits.

In September 2019. It was reported that work on the project had begun, carried out by Chinese company SEPCO3.