Home › News
New Report: Financing a Fossil Future – Tracing the Money Pipeline of Fossil Gas in Southeast Asia
Southeast Asia is spiraling into a fossil future thanks to a massive fleet of gas projects
By: Center for Energy, Ecology, and Development (CEED)
2022-06-03 Share this page: 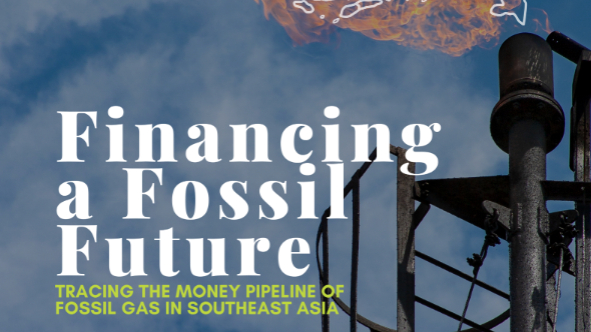 Southeast Asia (SEA) is spiraling into a fossil future thanks to a massive fleet of gas projects and the financial institutions backing them, risking the region’s energy security, biodiversity, and any and all hope to limit global temperature rise to less catastrophic levels – a new report from civil society reveals.

Financing a Fossil Future: Tracing the Money Pipeline of Fossil Gas in SEA published by think-tank Center for Energy, Ecology, and Development (CEED) and partners dives into projects and companies involved in fossil gas exploration and development, transportation, gasification, storage, re-gasification, pipelines, and power generation, and the institutions that offered them financial services from 2016 to 2022.

Dubbed as a clean alternative to coal, fossil gas and its supercooled form liquefied natural gas (LNG) has turned into a new favorite of Southeast Asian nations in recent years to fuel growth. This, however, goes against the economic interests of SEA, which is largely comprised of developing countries – especially as gas prices soar to record-highs.

“With gas, we are driving down the same road to economic and climate disaster as we did with coal. We merely switched lanes,” said Gerry Arances, Executive Director of CEED.

At 117 GW, new fossil gas capacity in pre-construction stages in SEA is now bigger than any other region in the world – eclipsing even East Asia which includes gas development giants China and Korea. 5,190 km of gas pipelines have also started operations or were proposed since January 2016. Meanwhile, post-Paris Agreement, LNG import and export terminal capacities are at 164 MTPA and 16.8 MTPA, respectively.

“We are gearing towards a fossil gas lock-in as if we are blind to the lessons that the experience with the Ukraine-Russia crisis offers: that building dependence on gas means exposure to volatile power supply and prices, and vulnerability to geopolitical shocks globally – on top of an already catastrophic climate crisis triggered by fossil fuels. Gas development is contrary to all development and sustainability interests SEA nations should be protecting,” added Arances.

Despite being less carbon-intensive than coal, fossil gas and LNG produce high amounts of methane throughout its life cycle. Methane is a short-lived yet powerful pollutant that can trap heat in the atmosphere 80 more times than CO2. It is for this reason that a Global Methane Pledge was launched at the 2021 climate conference, where signatories are asked to take voluntary actions to contribute to a collective effort to reduce global methane emissions at least 30 percent from 2020 levels by 2030. 6 SEA nations are signatories.

“We seem to be in agreement that we do not want anything to do with more disastrous climate change from methane. Why, then, is SEA hell-bent on promoting fossil gas and LNG?” added Arances.

The report unveils companies and financial backers tying SEA to a fossil future.