Home › News
UniCredit shareholders’ meeting: on climate ambition there is still a long way to go
Once again, the Italian bank holds its shareholders' meeting behind closed doors, without debate and with little media visibility.
By: ReCommon
2022-04-08 Share this page: 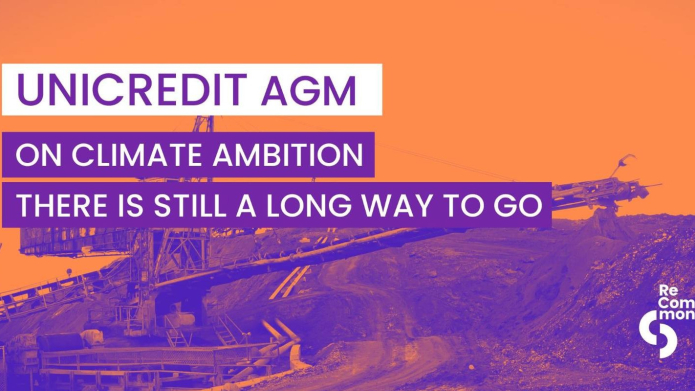 2022 UniCredit AGM: on climate ambition there is still a long way to go. Photo: ReCommon

UniCredit, Italy’s second largest banking group and among the top 40 at an international level, opens the 2022 season of shareholders’ meetings of Italy’s major banking groups. Once again, this year, Italy’s leading banks and companies will hold their shareholders' meetings behind closed doors, without debate and with little media visibility. This is in complete contrast to other countries, such as the United Kingdom and France, where shareholders have been given the opportunity to participate.

And yet, if we had been able to attend the meeting as shareholders, we would have pressed the management of the Piazza Gae Aulenti group on several issues, in particular the lack of consistency between the commitments on the fossil fuel sector and the continuous and increasing financing that it continues to receive from UniCredit.

The group’s overall strategy re-launched in the new 2022 – 2024 strategic plan called “Unicredit Unlocked” put sustainability at its core. "We have a natural commitment to sustainability. We believe in action, not words". This is what can be read on the institutional website regarding ESG targets, i.e. those linked to environmental and social sustainability and the group’s internal mechanisms. Regarding UniCredit’s exposure to the fossil fuel business, we at ReCommon propose a different formula: we look at actions not words.

About coal, the most polluting among fossil fuels, UniCredit’s words tell of a total phase-out of coal sector financing in all markets by 2028. The facts, however, tell us that in 2021 UniCredit has increased its financing to the coal sector by 28% compared to the previous year. Included in those financing are US$ 226 million for RWE and the US$ 136 million for Sasol stand. RWE, which would be one of the German customers exempted from the group’s policy is the most polluting energy company in Europe and also the first coal company to legally challenge a state’s decision to fulfil its climate commitments, notably by suing the Netherlands. The second is a South African company that is planning expansion activities in the sector and has not yet indicated the date by which it will phase out coal from its business. These characteristics would make the financing to Sasol a clear violation of the group’s coal sector policy. Solicited by ReCommon through the pre-shareholders meeting questions UniCredit preferred not to provide clarification on the financing to Sasol because of confidentiality information referred to clients.

On the oil and gas sector, UniCredit is talking about stopping all funding both to oil and gas projects in the Arctic region and to projects exploring new oil reserves and expanding current production. The facts tell us that between 2020 and 2021 UniCredit has financed US$ 12.5 billion to the oil and gas sector. Among the companies receiving the group’s financial support are oil majors such as Eni, Total and Repsol. There are also Russian companies such as Gazprom, demonstrating the group’s interest in the Russian fossil fuel business involved in the extraction of hydrocarbons in the Arctic region.

“The shareholders’ meeting is an additional opportunity to clarify the facts behind the words: massive funding to the fossil industry is not compatible with what the group publicly declares in terms of sustainability commitments,” said Daniela Finamore, ReCommon’s Finance and Climate Campaigner. “Steps forward in terms of stopping the financing of the fossil industry are being watered down by as many exceptions and loopholes. This is not the right direction to take to meet the challenges required by the urgency of the climate crisis."