Home › News
Industrial and Commercial Bank of China withdraws financing from the Lamu Coal Plant
By: Save Lamu
2020-11-16 Contact: 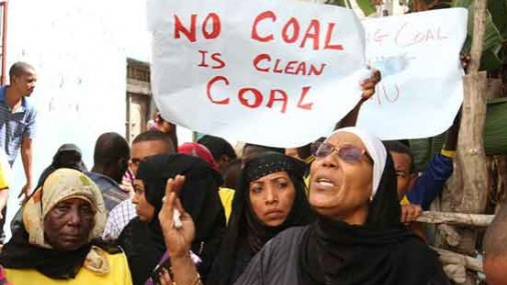 Save Lamu has learned that the Industrial and Commercial Bank of China (ICBC) has decided not to finance the Lamu coal plant due to cited environmental and social risks with the project. Save Lamu has previously submitted various petitions and complaints to ICBC citing extensive environmental destruction and social risks that would be encountered once the project is operational.

The 1,050MW Lamu coal plant was expected to be the largest coal plant in East Africa and first in Kenya. It was proposed to be built at Kwasasi, Lamu County. According to the project documents for the coal plant, it was expected that ICBC would finance the project at a tune of USD 1.2 billion. A reliable source at ICBC has now said the bank will not make this investment.

The proposed plant is a public-private partnership (PPP), developed on a build-own-operate (BOO) basis by Amu Power, a special purpose joint venture of two Kenyan companies, Centum Investments and Gulf Energy. The recent revelation from ICBC marks the biggest big blow to the project as it was expected that the bank was funding 60% of the USD 2 billion expected development costs for the coal plant.

“We are very happy and grateful to hear that the ICBC will no longer fund Amu Power for the coal project. We as Save Lamu will always be there to defend its people and our environment; we don’t want a coal project in Lamu County and in Kenya at large,” said Is’haq Abubakar, Vice Chairperson at Save Lamu.

Save Lamu, together with its other partners and supporters, has been following up with ICBC since December 2016 through various letters and petitions sent to them and the Chinese Embassy in Nairobi. For many years the concerns of the organisation were unanswered until recently.

Environmental activists support the ICBC decision to pull out of the project, since the proposed plant would have directly and indirectly caused irreparable environmental, social and cultural damage to Lamu, particularly in light of Lamu Old Town, a UNESCO Heritage site. Lamu Town is currently at risk of being delisted from the list of World Heritage sites due to similar concerns raised on the Coal Plant and LAPSSET project.

Save Lamu has been using various approaches to lobby against the Lamu coal plant in the hope that investors such as ICBC would pull out including petitions, demonstrations, and other lobbying tactics. On June 26th 2019 the petition to the National Environmental Tribunal (NET) to cancel the environmental license issued by National Environmental Management Authority (NEMA) to Amu Power was successful, citing the lack of public participation. Amu Power is still appealing that decision.

Since the cancellation of the project’s NEMA license, several investors who were cited as possible supporters of the coal plant have distanced themselves from the project. On the 24th of November 2019, the African Development Bank (AfDB) announced that it would pull out from supporting the 1050MW coal power plant project. According to project documents published by the project proponents, AfDB was expected to provide the Lamu coal plant with a partial risk guarantee for the project. Another potential investor for the project was General Electric (GE), which announced in September that it intends to shift its investment policy away from the new coal power market.

“While we are happy to hear this great news, we will continue our lobbying so that no new investor will be sought to fill the gap left by ICBC. We want the project not just suspended, but cancelled entirely,” stated Khadija Shekuwe, Save Lamu Coordinator.

Cognisant that the end of funding of the Lamu coal plant might not mean the end of pursuit of coal, Save Lamu formed the deCOALonize campaign in 2017 to create a sustainable national movement lobbying against all coal power production and exploration in Kenya. Currently the local community in the Mui Basin is also lobbying against proposed coal mining projects in Kitui County. This is especially concerning following reports of government documents citing an intent to build a coal plant in Kitui as well.

“Campaigns have been and will continue to be sustained to ensure a similar project is not proposed in other counties in Kenya as an alternative to Lamu. It is heartening to see myriad investors moving away from coal financing as renewables become more and more appealing economically,” stated Omar Elmawi, coordinator for the deCOALonize Campaign.