Home › News
Bank.Green launches website, campaign sounding alarm on banks financing fossil fuels
Is your money funding the climate crisis? Bank customers around the world now have a quick and easy way to get an answer with a new online tool at bank.green
By: Bank.Green
2021-04-05 Contact: 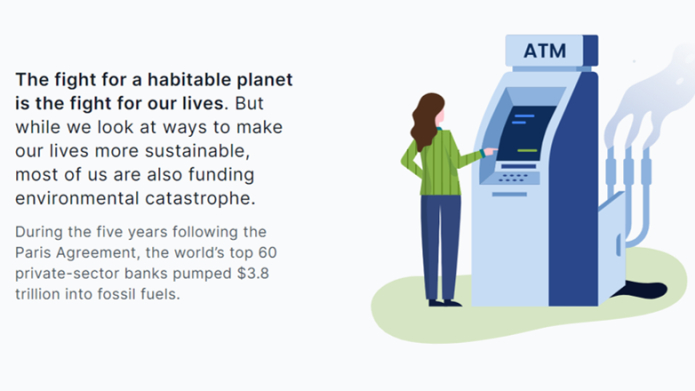 Since the Paris Agreement, the world’s 60 largest private-sector banks have poured USD 3.8 trillion into fossil fuel projects. The Money Movement campaign, running from April 5 until April 22, raises awareness of fossil fuel funding through digital messaging, online seminars, and community building in partnership with a coalition of movements and organizations, including BankTrack and Reclaim Finance.

Keeping global temperature rise under 1.5ºC to avoid runaway climate chaos is incompatible with continued financing for fossil fuels, yet most customers may not be aware of their bank’s climate impact. For example, eight out of ten UK customers at Barclays and HSBC were unaware that their bank finances fossil fuels.

The Money Movement campaign encourages bank customers to see taking action against their banks as one of the easiest, most impactful personal acts to take in the face of the climate crisis. Bank.Green’s online bank-switching tool, bank.green, streamlines the process for customers to discover their bank’s fossil fuel record, explore sustainable alternatives, learn how to contact their banks, and switch accounts.

“Past climate campaigners have waged important public awareness campaigns against banks that fund fossil fuels, and we are excited to build upon their work,” said Zak Gottlieb, a Bank.Green campaign coordinator. “Our Money Movement campaign is based on the belief that in addition to campaign groups, banks also need to hear directly from their customers. It’s one thing to ignore a campaign group, but if your customers are unhappy, your business is in trouble. That’s why we are building a community of customers who are empowered to take action against their own banks.”

About Bank.Green:
Bank.Green aims to educate the public on the environmental destruction funded by the banking industry while fostering an empowered community to take action. Bank.Green’s Money Movement campaign encourages as many consumers as possible to exercise their collective power through
bank.green, an online bank-switching tool where people can learn about their banks’ climate impacts and find resources for moving money away from fossil fuels.