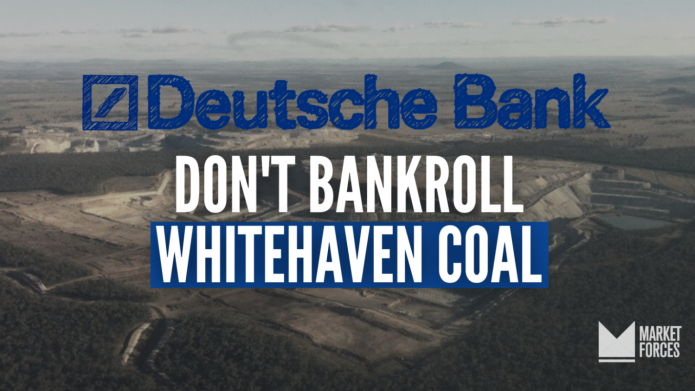 Specifically, Debtwire reports that Deutsche Bank organised a “non-deal roadshow” event this week, and intends to act as a bookrunner for any bond issue that emerges (1).

Whitehaven last month flagged a potential move away from reliance on major banks and towards the bond market as a source of finance for its climate-wrecking coal (2). This move has been driven by the rapidly shrinking pool of bank finance available for coal, due to banks introducing exclusion policies and reducing their exposure to the industry.

In fact, Deutsche Bank’s own Environmental and Social Policy Framework says the bank “will not provide any financing for greenfield thermal coal mining” and is committed to “phase out coal exposure by 2025 worldwide” (3).

Deutsche Bank’s decision to arrange finance for Whitehaven is also completely inconsistent with its stated commitment to the Paris Agreement and the goal of net zero emissions by 2050.

Whitehaven is planning to spend around US$2 billion on three new coal mining developments (Narrabri South, Winchester South, Vickery). When emissions from digging up and burning the coal are added, over their lifetimes these three mines would unleash almost 1.1 billion tonnes of carbon emissions, the equivalent of almost twice Australia’s annual emissions (4).

These new coal mines and expansions are completely inconsistent with the goal of limiting global warming to 1.5ºC, which scientists have warned requires 95% of Australia’s coal to remain unextracted (5). They are also incompatible with achieving net zero emissions by 2050, as the IEA’s recent ‘Net Zero by 2050’ report states “no new coal mines or mine extensions are required” (6).

Send Deutsche Bank an email or leave a comment on its social media pages!