Home › News
COP27: Take power over climate finance from financial corporations – strict regulation is needed to save the planet
Civil society groups come out against corporate capture and negligence on climate finance at climate summits and at the UNFCCC.
By: BankTrack, Corporate Europe Observatory, Global Justice Now & Transnational Institute
2022-11-02 Contact: 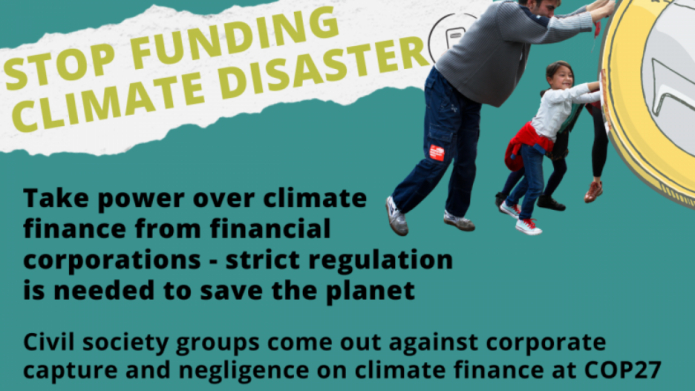 Today, 89 civil society organisations from across the globe – including BankTrack – launched an attack on the way global climate talks have dealt with finance. Financial corporations have been allowed/given the mandate to take charge of developments – a formula developed at COP26 in Glasgow which has shown its deep flaws in recent months with UN convened initiatives led by the financial industry refusing to live up to commitments.

The statement also condemns the failure of rich countries to provide adequate climate finance for a green transition and refusal to countenance demands from the global south for reparations.  There are many ways to do climate reparations for the countries in the global North to repair the harms they caused to the planet and people in the global South and the first step is to stop the harm. Giving more power to financial corporations multiplies the harm instead of discontinuing.

According to the statement, we cannot "save the planet from disastrous climate change without tackling financial markets. As long as trillions of dollars go unhindered to fund yet more fossil fuels and deforestation, it will not be possible to halt climate change or enable communities to adapt." But while the Paris Agreement included important progress on the need to change global "financial flows", climate summits have not led to any serious proposals that would change financial markets. Instead, power has been handed over to the very financial corporations that provide most funding for fossil fuel projects across the globe.

Any move in the opposite direction would have to start with limiting the power of the so-called Glasgow Financial Alliance for Net Zero. They must be 'dethroned', removed from the key position the industry-led coalition enjoys today.  But as it stands, COP27 is set to continue along the wrong track.

Gonzálo Berrón, Associate at Transnational Institute said: "This capture of climate governance by private finance was only possible due to the exponential growth of multistakeholderism within the UN system. The result is that a crucial part of the climate governance policies are developed in board rooms in Wall Street or in the City of London."

Kenneth Haar, a researcher from Corporate Europe Observatory said: "At the COP level, the whole initiative on transforming financial markets to support the transition, has been handed over to the very financial corporations that top the list of fossil fuel funding. That is a dead end, and we see that very clearly these days. It leads to greenwashing, inertia and to a power grab of big bankers."

The promise of the Paris Agreement was to introduce reforms of how financial markets work. Instead, what we see is the dominant players on financial markets take charge of the UNFCCC. We need to see bold reforms, and some of the metrics are clear: investments in new fossil fuel infrastructure or exploration must be banned immediately.

Dorothy Guerrero from Global Justice Now said: "While the climate crisis is deepening and households are falling into poverty, inflation and soaring energy bills, financial corporations and insurance investors are making huge bucks on their profiteering. This must stop and in the forthcoming climate talks, governments should say the financial markets are not our masters and end their powerful role."