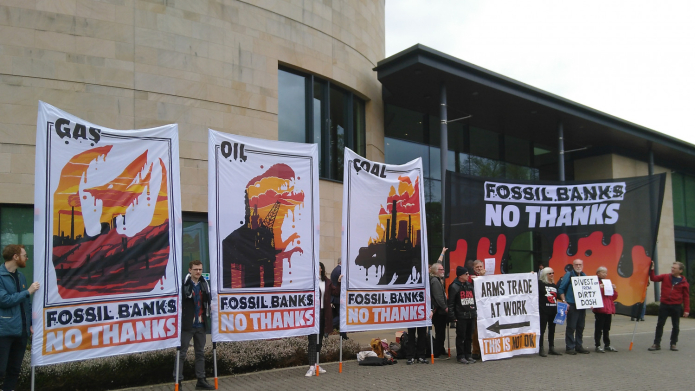 BankTrack, Rainforest Action Network, Reclaim Finance and ShareAction welcome the announcement by Royal Bank of Scotland (RBS) of ambitious new climate targets and a set of policy measures that, if fully implemented, will see the bank move well ahead of its peers towards taking up its responsibility in tackling the climate crisis.

The measures, announced last Friday by Alison Rose, the bank’s recently appointed CEO, include a significant commitment to ‘do what is necessary to achieve alignment with the 2015 Paris climate Agreement’ and halve the climate impact of its financing activities by 2030. This ambitious goal is to be achieved by measures including a termination of all lending and underwriting activities to companies with more than 15% of activities related to coal, with a full phase out of finance to the coal sector by 2030; termination of all lending for projects involving exploration for new oil and gas reserves; and ‘progressively withdrawing support’ for major oil and gas companies that ‘do not have a credible transition plan in place that is in line with the Paris climate Agreement by the end of 2021’.

Johan Frijns, director of BankTrack commented: “It is especially this uncompromising stance towards its clients in the oil and gas sector that makes RBS stand out positively from other banks that continue to finance the fossil fuel industry. Whereas in the last few years a range of banks have announced partial or even full phase-out plans for the coal sector, no large bank has so far taken similar steps to exclude ‘non-transitioning’ major oil and gas clients from its portfolio.

“RBS has come a long way since it actively advertised itself as ‘The Oil and Gas Bank’ only fifteen years ago. It is now the first large bank to demand from all its major clients in that same oil and gas sector that they face up to the reality of the climate crisis and develop credible Paris proof transition plans, and that they do so within two years or lose support from the bank. This bold posture is exactly what we need other banks to follow.”

Daisy Termorshuizen, climate campaigner at BankTrack, added: “RBS is taking significant steps towards meeting the three demands of the global ‘Fossil Banks, No Thanks’ campaign, supported by over 325 civil society groups; acknowledge the responsibility of the fossil fuel industry for causing the climate crisis, stop financing new fossil fuel projects and come up with a credible phase-out plan.  Even though RBS already reduced its support for the coal, oil and gas industry over the years, this policy change signifies an important commitment that other Fossil Banks must follow”.

The move from the Scotland-based bank is also important as the United Kingdom readies itself to host the next Climate Summit in Glasgow in November 2020. So far, the three largest UK banks Barclays, HSBC and Standard Chartered continue to be enthusiastic supporters of the fossil fuel industry, embarrassing the United Kingdom as host to the summit. RBS is now showing these three banks a way more constructive way forward.

Yann Louvel, policy analyst at Reclaim Finance, said: "RBS becomes the first big bank to adopt a 15% exclusion threshold for coal companies, which is laudable, but the approach on coal from its French peer Crédit Agricole still remains the most comprehensive so far as it excludes all coal developers, phases out all exposure to any company active in the coal sector by 2030 in EU/OECD countries and by 2040 elsewhere, and calls on non-excluded companies to adopt by 2021 a detailed phase out plan of their coal assets. The main breakthrough of this new policy from RBS lies in its oil & gas approach with the exclusion of major oil and gas companies without a credible transition plan in line with the 2015 Paris Agreement by the end of 2021. We will closely track the implementation of this policy and call on other financiers such as Barclays and BNP Paribas to follow suit and stop financing climate destruction."

Patrick McCully, Climate and Energy Program Director at Rainforest Action Network, said: “While this policy still has some apparent loopholes on coal and while as ever the proof of its value will be in its implementation, RBS has now positioned itself as a global leader on climate among big banks. Its requirement that major oil and gas clients adopt Paris-aligned transition plans and its goal to at least halve the emissions it finances by 2030 are especially significant. It is now time for RBS’s UK peers, and the global mega-banks like JPMorgan Chase and Wells Fargo which bear most responsibility for bankrolling the climate crisis, to follow RBS’s lead and announce their intention to phase out fossil-fuel financing on a Paris-aligned timetable.”

Jeanne Martin, Campaign Manager at ShareAction, said: “We applaud RBS for raising the bar of ambition for banks by committing to stop lending to major energy companies that do not have credible transition plans aligned with the Paris climate agreement by 2021. RBS’s new commitment is in line with what ShareAction’s climate change resolution asks of Barclays, Europe’s largest fossil fuel financer. If RBS, which used to market itself as “the oil and gas bank” can do it, so can Barclays.”

Johan Frijns of BankTrack added: ”While the bank has not yet provided details on how exactly it will measure the climate impact of its financing activities, or how it will assess the quality of transition plans of major oil and gas clients, and with the devil usually hiding in these details, we all wish to salute Alison Rose for her courage and sector wide leadership on this matter.”

For an overview of fossil fuel related climate commitments of major banks see Banking on Climate Change (2019). A new edition of this report will be published in March 2020.

For an historical perspective, see The Oil & Gas Bank, RBS & the financing of climate change (2007).