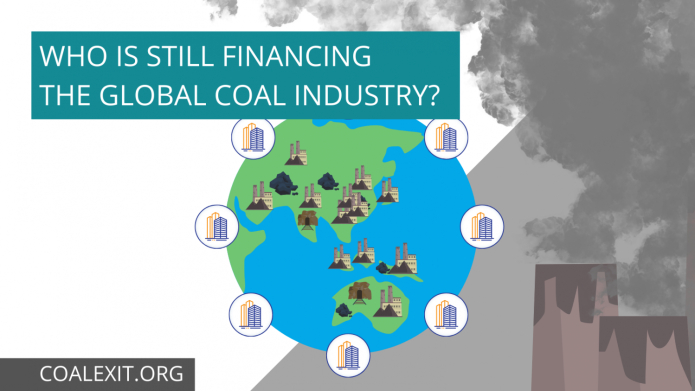 Today, Urgewald, Reclaim Finance, 350.org Japan and 25 other NGO partners, including BankTrack, published research on the financiers and investors behind companies on the “Global Coal Exit List” (GCEL). “It’s long been known that the coal industry is the number one driver of our planet’s rising temperature. But who is providing the loans, the underwriting services and the investments that allow these companies to keep on operating? Our research answers this question,” says Katrin Ganswindt, head of financial research at Urgewald. According to the NGOs’ research, commercial banks channeled over US$ 1.5 trillion to the coal industry between January 2019 and November 2021. “Our research displays all corporate lending and underwriting for companies on the GCEL, but excludes green bonds and financing that is expressly directed towards non-coal activities,” explains Ganswindt.

The Global Coal Exit List covers 1,032 companies. Their activities range from coal mining, trading and transport to the conversion of coal to liquids, the operation of coal-fired power stations and the manufacturing of equipment for new coal plants. “Banks like to argue that they want to help their coal clients transition, but the reality is that almost none of these companies are transitioning. And they have little incentive to do so as long as bankers continue writing them blank checks,” says Ganswindt. The NGOs also examined institutional investors’ exposure to the coal industry, based on their share and bond holdings in November 2021. “All in all, we identified institutional investments of over US$ 1.2 trillion in the coal industry,” says Yann Louvel, policy analyst at Reclaim Finance. “It’s absolutely frightening to see that pension funds, asset managers, mutual funds and other institutional investors are still betting on coal companies in the midst of an existential climate crisis,” he adds.

Top lenders to the coal industry

Between January 2019 and November 2021, 376 commercial banks provided US$ 363 billion in loans to the coal industry. But just 12 banks accounted for 48% of total lending to companies on the GCEL. The top 5 lenders in this “dirty dozen” ranking are the three Japanese banks Mizuho Financial, Mitsubishi UFJ Financial and SMBC Group, Barclays from the UK and Citigroup from the US. (A full list with lending volumes is provided on coalexit.org/finance-data). Ironically, 10 of the top 12 lenders to the coal industry (including the five banks mentioned above) are members of the Net Zero Banking Alliance. “At the time when it counts most – today – most of these banks are still channeling billions of dollars to the coal industry. It is not enough to make net zero promises for the distant future and only inch towards them reluctantly,” says Eri Watanabe from 350.org Japan.

Top underwriters to the coal industry

Between January 2019 and November 2021, 484 commercial banks channeled US$ 1.2 trillion to companies on the Global Coal Exit List through underwriting.(1) “Underwriting now accounts for the lion’s share of capital that banks mobilize for their coal clients. It’s therefore crucial that the Net Zero Banking Alliance also begins applying its emission reduction targets to underwriting immediately,” says Louvel. 12 banks account for 39% of total underwriting for the coal industry since 2019. The three institutions at the top of the NGOs’ “dirty dozen” ranking are the Industrial Commercial Bank of China, the China International Trust and Investment Corporation and the Shanghai Pudong Development Bank. The only non-Chinese bank among the top 12 underwriters for the coal industry is JPMorgan Chase from the US. JPMorgan Chase is not only a member of the Net Zero Banking Alliance; it is also the world’s 7th largest lender to the coal industry. “JPMorgan Chase’s list of coal clients in 2021 reads like a 'who's who' of the most carbon-heavy companies on the planet. Despite a new coal policy in 2020, it’s still servicing top carbon polluters like China Huaneng, Eskom, American Electric Power and Adani,” says Jason Opeña Disterhoft from Rainforest Action Network.

The big picture on banks

“At the end of the day, it doesn’t matter whether banks are supporting the coal industry by providing loans or by providing underwriting services. Both actions lead to the same result: Vast amounts of cash are provided to an industry that is our climate’s worst enemy,” says Ganswindt. If lending and underwriting are viewed together, the following picture emerges: Banks from only 6 countries – China, the US, Japan, India, the UK and Canada – were responsible for 86% of overall bank financing for the coal industry.

“If banks from these 6 countries continue business as usual, we won’t be able to move out of coal in time to keep the 1.5°C limit within reach,” warns Ganswindt. 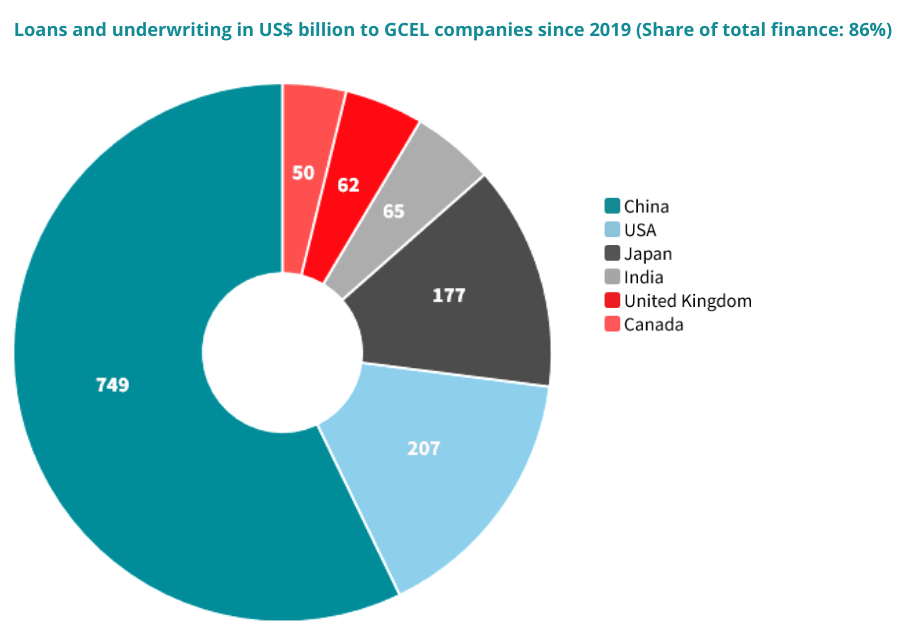 Loans and underwriting in US$ billion to GCEL companies since 2019 (Share of total finance: 86%).
Photo: Urgewald

Top investors in the coal industry

While banks play a central role in helping coal companies acquire capital through underwriting their share and bond issuances, the ultimate buyers of these securities are investors. For November 2021, the NGOs’ research identifies over 4,900 institutional investors with combined holdings of over US$ 1.2 trillion in the coal industry. The top two dozen investors account for 46% of this sum. The two largest institutional investors in the coal industry are the US investment giants BlackRock and Vanguard, with share and bond holdings of respectively US$ 109 billion and US$ 101 billion. Next in line are the US investment managers Capital Group and State Street and the Government Pension Investment Fund of Japan. (See for a full listing of the top 24 institutional investors coalexit.org/finance-data). “No one should be fooled by BlackRock’s and Vanguard’s membership in the Net Zero Asset Managers Initiative. These two institutions have more responsibility for accelerating climate change than any other institutional investor worldwide,” says Louvel.

The big picture on investors

When viewed through a country lens, the big picture is remarkably similar to the one described for banks. Investors from 6 countries account for over 80% of institutional investments in the coal industry. We even find the very same countries, albeit in a different order: the US, Japan, India, Canada, the UK and China. The US is the elephant in the room here: With shares and bonds totaling US$ 688 billion, US investors account for almost 56% of institutional investments in the global coal industry. “While the governments of the US, Canada and the UK pushed for a rapid coal phase-out in Glasgow, they have taken no steps whatsoever to encourage their own finance industries to exit coal,” remarks Louvel. 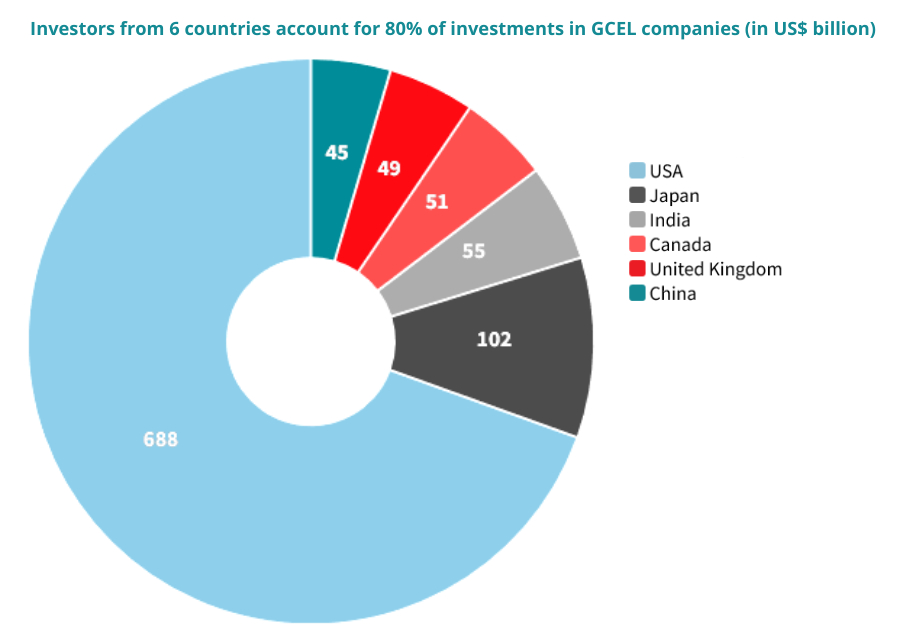 Investors from 6 countries account for 80% of investments in GCEL companies (in US$ billions).
Photo: Urgewald

For years, UNFCCC, UNEP, the UN Secretary General and even the IEA have warned that there can be no more investments in new coal plants and new coal mines. “Not investing in companies, which are still actively developing new coal plants, new coal mines or other coal infrastructure should therefore be a no-brainer for climate conscious investors,” says Ganswindt. Unfortunately, it’s not: The NGOs’ research identified institutional investments of over US$ 469 billion – 38% of the US$ 1.2 trillion total - in companies that are still developing new coal assets. The top investor in coal developers is BlackRock with investments of over US$ 34 billion. The coal plant developers in BlackRock’s portfolio are planning to build over 200 GW of new coal-fired capacity, an amount as big as the operating coal plant fleets of Russia, Japan, Indonesia, Poland and Germany combined. “Despite the flood of net zero alliances and climate ambition statements by financial institutions during COP26, the vast majority of investors are still failing to do the obvious: End their support for coal developers and adopt coal exit policies that are in line with the 1.5°C target,” says Louvel.

The NGOs’ research shows that a small number of financial institutions from a handful of countries play an outsized role in keeping the coal industry afloat. A dozen banks account for 48% of loans to the industry. Two dozen investors account for 46% of institutional investments in coal companies. “These financial institutions must come under fire from all quarters: civil society organizations, financial regulators, customers and progressive investors,” says Ganswindt. “Unless we end financing of coal, it will end us.”

For information on all financial institutions covered by our research as well as a detailed methodology, visit: coalexit.org/finance-data

1 Underwriting or investment banking refers to the process by which banks raise investment capital for companies by issuing bonds or shares on their behalf and selling them to investors such as pension funds, insurance companies, mutual funds, etc.