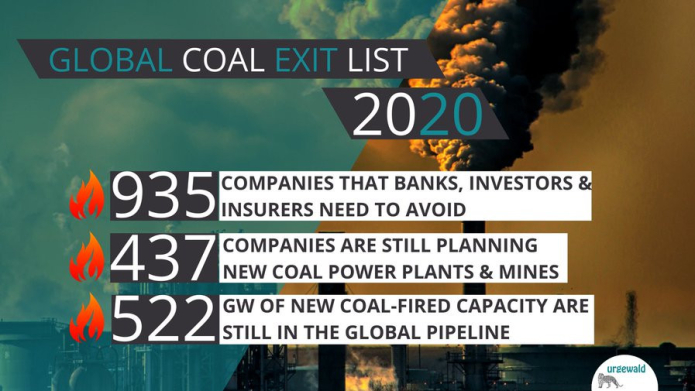 Today, Urgewald and 30 partner NGOs released a new update of the “Global Coal Exit List” (GCEL), the world’s most comprehensive database of companies operating along the thermal coal value chain.  “We are in a climate emergency and a speedy exit from coal is more urgent than ever. Our database identifies 935 companies the finance industry needs to blacklist if it is serious about fulfilling the Paris goals,” says Heffa Schuecking, director of Urgewald.

Since the Paris Climate Agreement was signed, the world’s installed coal-fired capacity has increased by 137 GW, an amount equal to the operating coal plant fleets of Germany, Russia and Japan combined. And over 500 GW of new coal-fired capacity are still in the pipeline. “Almost half of the companies listed on the 2020 GCEL are in expansion mode,” says Schuecking. 437 of the 935 companies featured in the database are planning either new coal plants, new coal mines or new coal transport infrastructure. Less than 25 of the companies on the GCEL have adopted a coal phase-out date. “The data we have collected is a frightening testimony to the coal industry’s refusal to deal with climate reality,” she adds.

The GCEL was first launched in November 2017 and is updated each fall. It has played an influential role in shaping the coal divestment actions of many large investors, especially in Europe. Over 400 financial institutions are now registered users of the database and Investors representing over USD 14 trillion in assets are using one or more of the GCEL’s three divestment criteria to exclude coal companies from their portfolios. As Peter Cashion, Head of Climate Finance at the International Finance Corporation (IFC) says: “The GCEL is a one-of-a-kind resource for investors and financial institutions that want to understand and manage climate risks in their portfolios.”

The GCEL covers the largest coal plant operators and producers, companies that generate over 20% of their revenues or power generation from coal, and companies that are planning to expand coal mining, coal power or coal infrastructure. The database features 935 parent companies as well as over 1,800 subsidiaries and affiliates, whose activities range from coal mining, coal trading and transport to coal power generation and manufacturing of equipment for the coal industry. Most of the information in the database is drawn from original company sources, such as annual reports, investor presentations and stock filings. All in all, the companies listed in the GCEL represent 88% of the world’s coal production and 85% of the world’s coal-fired capacity.

New Coal Plants Totaling over 520 GW in the Pipeline

While China has announced a 2060 carbon neutrality goal, the real litmus test for the governments’ climate ambition is its upcoming 14th Five Year Plan to be decided in 2021.

In many Asian countries, the prospects for new coal power projects are, however, beginning to crumble. In India, coal power projects totaling 47 GW were cancelled in 2019. In Bangladesh, which has the world’s 6th largest coal plant pipeline, the State Minister for Energy and Mineral Resources announced in October 2020 that 16 out of 21 coal power plants would likely be cancelled. And in the Philippines, which has the world’s 7th largest coal plant pipeline, the Department of Energy in October 2020 declared a moratorium for further new coal power plants. The Philippine People for Power Coalition is adamant that the new policy must also be applied to the over 10 GW of coal-fired capacity in the pipeline. In Malaysia, the country’s state-owned utility Tenaga Nasional Berhad declared in September 2020 that it will not build any new coal power plants.

“Wherever the coal industry operates, it is embroiled in conflicts,” says Schuecking. “Communities are no longer willing to accept the massive land and water grabs and the pollution and health impacts associated with the industry. They are fighting back in the courts and streets with increasing success,” she adds.

In 2019, Turkey’s highest administrative court struck down the permit for a new coal plant to be built by Hattat Holding near the scenic town of Amasra on the Black Sea coast. The lawsuit was filed by more than 2,000 people – a record number of plaintiffs for an environmental court case in Turkey. In January 2020, a Greek court annulled the permits for the Public Power Corporation’s Meliti 1 lignite power station and the planned Meliti 2 plant. In the same month, lawmakers in the US port city of Richmond, California passed a law banning coal transport from the Levin-Richmond Terminal that handles a quarter of coal exports from the US West Coast. In February 2020, a Brazilian Federal Court ruled against Copelmi Mineração’s plans to develop an enormous coal mine on indigenous lands in Rio Grande do Sul. In June 2020, a group of Colombia’s indigenous Wayuu people made a desperate appeal to the UN Rapporteur on Human Rights and the Environment to intervene against the continued operation of the Cerrejón coal mine. Wayuu villages are impacted by the influx of thousands of mine workers in the area, the respiratory diseases caused by constant exposure to coal dust and the drought caused by the mine’s appropriation of water resources. The Wayuu maintain, that the mine’s operators Glencore, BHP and Anglo American are exacerbating the Covid-19 crisis in the area and endangering their survival.

In response to a lawsuit by NGOs, the South African Water Tribunal revoked the water license for the Khanyisa coal power project in July 2020, thereby blocking the project’s sponsor, ACWA Power, from building the plant. In August 2020, the environmental committee of Chile’s lower house of congress adopted a proposal to shut down all of the country’s coal power plants by 2025. This is 25 years earlier than the former deal struck by the government with AES and other companies operating coal plants in Chile. In Germany, villagers who are due to be displaced for the expansion of RWE’s Garzweiler mine have filed a case against their expropriation in Germany’s highest court in September 2020. “Our villages should not be sacrificed for an industry whose operations doom our climate and violate public interest,” says Norbert Winzen, one of the plaintiffs. In the same month, the Czech Republic submitted a formal complaint to the EU Commission against the Turów lignite mine, which is operated by Poland’s largest coal utility PGE. The mine is situated on the Polish-Czech-German border and withdraws 30 liters of water per second, leaving villages dry and threatening groundwater reserves in the entire region. If PGE’s plans to expand the mine move forward, thousands of Czech families across the border would lose access to potable water.

In many countries, however, challenging the coal industry comes at a steep price. In South Africa’s Kwazulu-Natal Province, community activists took legal action against the expansion of the Somkhele open cast coal mine, run by Tendele, a subsidiary of Petmin Ltd. In October 2020, just weeks before a scheduled hearing before South Africa’s Supreme Court of Appeal, community leader Fikile Ntshangase – a 65 year old grandmother - was gunned down in her home.

An Industry in Economic Distress

The coal industry landscape is constantly shifting: 94 parent companies were dropped and 303 new parent companies were added to this year’s GCEL. These changes are often the result of corporate restructuring or bankruptcies as the industry’s economics have rapidly deteriorated in many regions of the world. Instead of being wound down, coal assets are, however, often shifted from one owner to the next.

A case in point are the Belle Ayr and Eagle Butte mines in the coal-rich Powder River Basin in the United States. In 2017, these were the 4th and 6th most productive coal mines in the US and belonged to Contura Energy, which acquired them during the bankruptcy proceedings of the mines’ former owner, Alpha Natural Resources. In December 2017, Contura sold both mines to Black Jewel LLC, which was at the time one of the largest coal companies in the US by sales volume. In July 2019, Black Jewel filed for bankruptcy and in October 2019 sold both Belle Ayr and Eagle Butte to Eagle Specialty Materials, an offshoot of the Alabama-based company FM Coal. In September 2020, FM Coal filed for bankruptcy, citing the mounting cost of deferred repairs, declining liquidity and decreased sales volumes. Much of the coal mined in the US now comes from mines owned or previously owned by a company that filed for bankruptcy reorganization.

The economic collapse of the coal business model is also apparent in Europe. Sweden’s Vattenfall recently announced plans to retire its newest and largest coal-fired power station, Moorburg in Germany. The 1,600 MW hard coal plant only took up operations 5 years ago, but as Magnus Hall, Vattenfall’s CEO, told the German press: “If you are losing money with it, you have to do something.” And Europe’s most stanch coal hardliner, the Polish utility PGE in October 2020 announced plans to transfer its coal mines and coal power stations to a new, yet to be founded state-owned entity. PGE is Europe’s second largest coal plant operator and produced 91% of its power by burning coal in 2019. The company has found it difficult to attract financing as more and more European financial institutions are shedding their investments in coal. “It is a good sign that PGE finally realizes the need to transform its business. The company should, however keep its coal assets and close them down, rather than passing the responsibility for its bad investment decisions onto the state and taxpayers. The restoration of PGE’s mining sites alone will take decades,” says Kuba Gogolewski from the Polish NGO Development YES - Open-Pit Mines NO.

Poland is only one of many countries, where governments are rushing to rescue troubled coal industry players. A textbook example is South Korea’s flagship EPC contractor and coal plant manufacturer, Doosan Heavy. Up to 80% of Doosan Heavy’s revenue comes from building coal power plants and as orders have dwindled, the company accumulated a net loss of USD 2.24 billion between 2014 and 2019. Although the South Korean government had promised to put an end to coal financing, it has nonetheless put together a rescue package of close to USD 3 billion to bail out Doosan Heavy. As Joojin Kim from the South Korean NGO Solutions for our Climate says: “Companies whose business model revolves around coal should not receive government financing.”

Coal is a business of the past. The industry has lost its social license to operate and is no longer competitive in today’s energy world. But as evidenced by the Global Coal Exit List 2020, coal companies could still wreck our future. Although coal-fired generation needs to collapse by 11% per year to keep the 1.5°C goal within reach, less than 25 companies on the GCEL have any sort of coal exit plan, let alone a plan that is ambitious enough to meet this goal. And almost half of the companies on the GCEL still intend to develop new coal assets. “Waiting for coal companies to transition is a recipe for runaway climate change,” says Schuecking. “Time is slipping through our hands. Unless financial institutions speed up their exit from the industry, we will fail the most basic of all climate tests: leaving coal behind.”

The 2020 GCEL can be downloaded at: www.coalexit.org