Home › News
Nordic bank Nordea faces questions about its fossil fuel policies at its AGM
Nordea Bank’s latest climate policy showed some real progress but failed to rule out finance for oil and gas expansion.
By: BankTrack & Friends of the Earth Finland
2022-03-24 Contact: 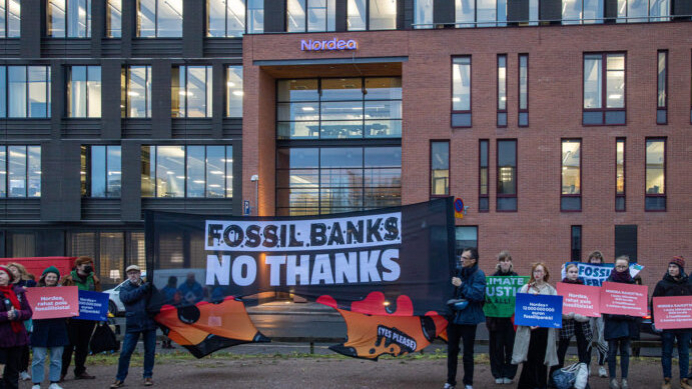 Protest outside of Nordea's headquarters in October 2021. Photo: Friends of the Earth Finland

At the Annual General Meeting of Nordic bank Nordea today, Friends of the Earth Finland and six partners, including BankTrack, are challenging the bank on its fossil fuel policy and climate commitments. Published in September 2021, Nordea Bank’s latest climate policy showed some real progress, for example excluding financing companies that derive more than 5% of their revenues from coal. Unfortunately, it failed to rule out finance for oil and gas expansion.

At Nordea’s AGM today, Friends of the Earth Finland, ActionAid Denmark, Amnesty International Finland, BankTrack, Fair Finance Guide Sweden, Greenpeace Nordic and ShareAction, asked how the bank thinks its continued financing for fossil fuels relates to its commitment to reduce financed emissions by 40-50% in 2030. Nordea replied that it is recommending its clients to adopt a transition plan in line with the Paris Agreement and that it expects them to invest in and work towards the necessary energy transition.

Nordea was also asked what plans it has to restrict financing to oil & gas expansion activities based on the findings of the IEA Net-Zero Emissions by 2050 roadmap ('no room for new oil & gas fields'). Nordea’s response states that its mid-term climate targets of 40-50% on lending and investment portfolio proves them to be aligned with the guidelines of the Net Zero Banking Alliance.

Although Nordea’s financed emission reduction targets are more ambitious than those of many other banks, it is disappointing that the bank fails to recognize that it needs to address its financing for the expansion of the fossil fuel industry if it is serious about aligning with the goals of the Paris agreement.

Vera Kauppinen, campaign specialist at Friends of the Earth Finland, says: “Nordea is on the right path, but unfortunately the climate crisis is urgent and the bank needs to speed up its climate action. We are expecting Nordea to address the loopholes in its fossil fuel policy and adopt new restrictions for conventional oil and gas, especially for companies expanding their production.”

Maaike Beenes, Campaign lead banks and climate, says: “As long as Nordea does not explicitly rule out financing for all companies and projects expanding the fossil fuel industry, it can’t argue that its financing is in line with what is required to limit global warming to 1.5°C.”

Nordea has made steps in the right direction on fossil fuels recently, introducing new restrictions on financing for coal and unconventional oil and gas after multiple reports, including BankTrack’s Banking on Thin Ice and ShareAction’s Countdown to COP26, showed significant gaps in the bank’s  fossil fuel policy. The policy puts new restrictions on coal companies, including not expanding financing to existing coal clients unless they adopt a plan to phase out coal by 2030 in industrialised countries and 2040 globally. This is an important step for Nordea to take.

Surprisingly however, German companies are exempted from this rule, a phase-out only required by 2038. Nordea could therefore finance German coal companies without any restrictions until 2038. The bank argues this aligns with the German government's national legislation to phase out coal, despite not being in line with the Paris Agreement, which requires a phase-out by 2030 in OECD countries.

Another limitation of the policy regarding coal is that although Nordea applies a relatively low threshold to exclude coal companies (5% revenue), it does not complement this with absolute metrics. For some companies with major coal activities in absolute terms, coal is only a small percentage of revenue because they are highly diversified. An example is Nordea's existing client Fortum, one of Europe's largest emitters, which derives just over 4% of its turnover from coal.

These new restrictions are important steps in the right direction. However, they will not prevent Nordea from financing conventional fossil fuel expansion projects (including Liquefied Natural Gas, offshore drilling and infrastructure for conventional oil and gas). The limited scope of the Arctic drilling exclusion also means that Nordea can continue to finance Arctic onshore drilling projects and companies such as Lundin Energy and Aker BP, which are exploring for more oil and gas reserves in the area. Aker and Lundin were Nordea’s largest fossil fuel clients in the period 2016-2020, and together received US$ 3 billion in financing from the Finnish bank. Nordea should therefore expand its policy to exclude all Arctic drilling projects and all companies involved in the expansion and exploration of Arctic oil and gas. This has become even more urgent given the announcement by the European Commission in October last year that it wants to end Arctic drilling, and will ban the import of Arctic fossil fuels to the EU, creating financial risk to companies still active in the Arctic, as well as their financiers.

Climate science has made it inescapably clear that there can be no expansion of fossil fuels if we are to limit global warming to 1.5˚ C. Even the International Energy Agency (IEA) concluded in its May 2021 ‘Net Zero by 2050 Pathway’ that ‘no new oil and natural gas fields are needed’ and therefore ‘no investment in new fossil fuel supply projects’. All banks therefore urgently need to end all financing for companies with expansion plans. However, Nordea does not have in place any restrictions for companies with such plans, or for conventional oil and gas expansion projects. In fact, ShareAction's 2022 Oil and Gas Expansion report showed that Nordea increased its financing for the top 50 upstream oil and gas expanders by 18% in 2021 compared to the average of 2016-2019. Nordea therefore urgently needs to improve its fossil fuel policy to address this problem.