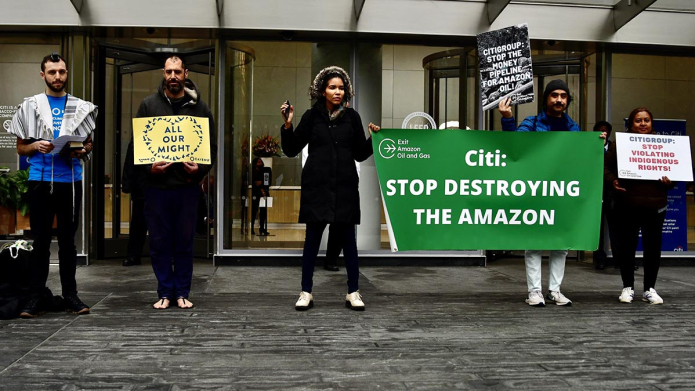 The Amazon, stewarded by millions of Indigenous peoples from hundreds of distinct cultures for thousands of years, is one of the world’s largest and most biodiverse forests. It holds about 10% of the planet’s biodiversity and has historically been one of the world’s largest carbon sinks, absorbing billions of metric tonnes of carbon and playing a key role in global climate regulation. But because of increased extractive activity driven by financing from powerful banks, the Amazon is now at a tipping point. In some parts of the rainforest, so much tree cover has been lost to industrial oil and gas, mining, and agribusiness operations that the biome is now emitting more carbon than it absorbs, threatening to knock the world’s food and water systems off balance and causing irrevocable damage to local communities.

Oil and gas activity in the Amazon poses multiple threats to people and planet. Industrial fossil fuel operations are often the first to build infrastructure that cuts into remote parts of the rainforest, opening them up to further deforestation from other industries. The transportation, processing, and consumption of oil and gas is not only the number one driver of global warming, but also causes devastating oil spills that pollute local water sources and cause long-term health problems for residents. Research has shown that financing and investing in the Amazon oil and gas industry is inherently tied to deforestation, biodiversity loss, Indigenous rights violations, pollution, corruption, and the exacerbation of climate dysregulation, and the growing strength and impact of resistance to oil and gas operations on the ground in the rainforest presents significant reputational and legal risks to investors and financiers.

Indigenous leaders from the Amazon have repeatedly called on banks to adopt an Amazon Exclusion policy. Similar to the Arctic exclusion policy to no longer finance oil drilling in the Arctic that was adopted by virtually every major bank in 2020, the Amazon Exclusion policy calls for banks to exclude financing for any oil and gas activities in the Amazon Basin. The International Energy Agency has asserted that in order for the world to meet the Paris Climate Agreement goal of limiting global warming to less than 1.5 degrees Celsius by the end of this century, fossil fuel expansion needed to have ended by last year. And the Intergovernmental Panel on Climate Change has called for rapid and deep cuts to fossil fuel activity this decade. A commitment to no longer finance oil and gas in the Amazon would align banks with their stated goals of reducing financed emissions, respecting Indigenous rights, and protecting biodiversity and climate.

Despite initial moves from European banks to cut financing for oil trade from the western Amazon, no major US banks have committed to an Amazon Exclusion policy. This includes members of the Net Zero Banking Alliance, an alliance of banks ostensibly moving to align their portfolios with meeting the Paris Climate Agreement goals.

Citi is the top bank providing financing and underwriting to companies active in the Amazon oil and gas industry, with an estimated total of US$ 42 billion in open or recently matured deals, according to preliminary research completed by Stand Research Group in April 2022. This includes over US$ 14.6 billion in direct lending, mostly to state oil companies such as PetroEcuador (Ecuador), EcoPetrol (Colombia), and PetroBras (Brazil). It also includes over US$ 9 billion in indirect finance and underwriting for oil traders who trade millions of barrels of Amazon oil to California each year. In addition to being the top financier of the Amazon oil industry, Citibank is a major deal maker, taking leading roles in creating financial instruments for the oil industry.

Citigroup has a long relationship with the government of Ecuador, and facilitates many Ecuadorian companies — including PetroEcuador — in raising capital via bond issuances to fund their operations. Between 2014 and 2019, Citi was involved in 12 deals worth US$ 9.4 billion, with a 52.9% share of the capital markets platform in Ecuador – the highest of any foreign bank operating in the country at the time.

Citi’s financial support to the Ecuadorian government is directly linked to oil drilling on and near Indigenous territories in the Amazon, where community leaders have repeatedly voiced opposition to such projects.

Last year, Ecuadorian President Guillermo Lasso pledged to double oil production in the country, and oil concessions that span approximately 7.5 million acres or 3 million hectares (30,000 square kilometers) of rainforests were slated to be auctioned off for development. In 2017, Citi was the sole book-runner on bond issues for PetroAmazonas (now PetroEcuador) worth $300 million USD. The bank was also the sole advisor on bond issues for PetroAmazonas worth US$ 670.5 million that year. The capital raised from the latter was likely used to make payments to subcontractors involved in oil well drilling and other expansion activities in Yasuní National Park, a UNESCO World Heritage site where the Indigenous Tagaeri and the Taromenane peoples choose to live in voluntary isolation.

Citi calls itself a climate leader while pouring billions into oil and gas operations on Indigenous territories in prime rainforest, despite their lack of consent to such activities. Join Indigenous leaders like Nemo Guiquita (pictured in the video above) in calling for Citi, JPMorgan Chase, and other major banks to stop financing fossil fuel expansion, and adopt an Amazon Exclusion policy now! Take action at ExitAmazonOilAndGas.org.

Published in March 2022, the Banking on Climate Chaos report assesses big banks' financing for fossil fuels. These case studies highlight how this financing harms local communities, who are fighting back.