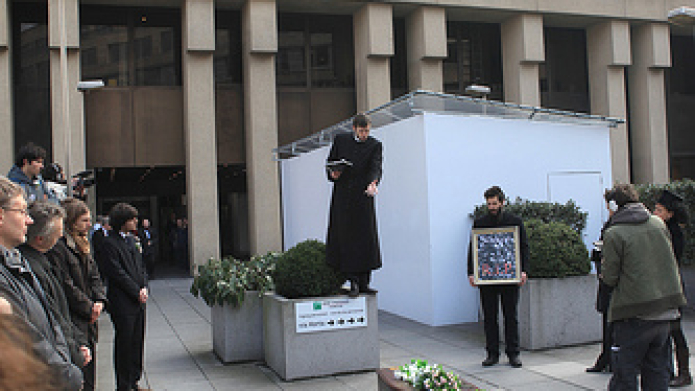 On Tuesday 1st March non-governmental organisations handed over 4,000 signatures to representatives of banks that are active on the Belgian market. The signatories of this petition ask the banks to end their investments in coal-fired power stations. In order to bring extra attention to the petition, a number of the banks were visited by a funeral procession, symbolically carrying out a funeral for coal.

At every bank that was visited on the route of the funeral procession, a priest read an elegy to the financiers who had supported the departed coal industry, followed by a symbolic burial. The signatures of the Bankroet petition, in the form of a book of condolence, were presented to the representatives of the banks, together with a memento in the form of a lump of coal. As the ceremony progressed, the mood turned to relief, and even euphoria, at the death of coal. The ceremony was accompanied by the band Jaune Toujours, who ensured that the procession became triumphant. People passing by, and curious bank employees, were handed a copy of the death announcement.

Banks play an important role in the promotion of coal power, by providing investment and loans. Research conducted by Netwerk Vlaanderen ("Bankers on hot coals") revealed that the investigated banks invested at least €18.5 billion in E.ON, RWE and Vattenfall in the period 2008-2009. These energy companies have based their strategy in the construction and operation of coal-fired power stations. Deutsche Bank (€7.4 billion) and BNP Paribas (€6.2 billion) head the list.

In 2009, Deutsche Bank also gave a loan for the construction of coal-fired power station that will emit 5.2 million tonnes of CO2 each year. This is equivalent to the annual emissions of 1.7 millions cars. In 2008 BNP Paribas participated in a loan to GDF Suez, intended for the construction of a new coal-fired power station in Chili. The power plant will have a production capacity of 150 mW, which would create CO2 emissions of 860,000 tonnes per year - equivalent to the annual emissions of 286,000 cars.

The organisations supporting the action are encouraging the banks to move towards more climate-friendly investments, in the first place by ending their investments in coal power. The high level of emissions from coal means that it has a particularly destructive impact on the climate. Frank Vanaerschot: "This funeral is symbolic, but it remains an absolute priority to put an end to the use of coal as a source of energy. Banks play an important role in this, and they must understand that investments in dirty coal power are destroying our chances of preventing dangerous climate change. We invite them to say a final farewell to coal."

The funeral ceremony at the entrance to the banks - and the hand-over of the petition - marks the end of the "Bankroet" petition organised by Netwerk Vlaanderen, KWB, Greenpeace Belgium, WWF Belgium, Bond Beter Leefmilieu and Friends of the Earth Flanders & Brussels. As well as containing the signatures of 4,000 individuals, the action is also supported by 11.11.11, Netwerk Bewust Verbruiken, LETS Vlaanderen and JNM