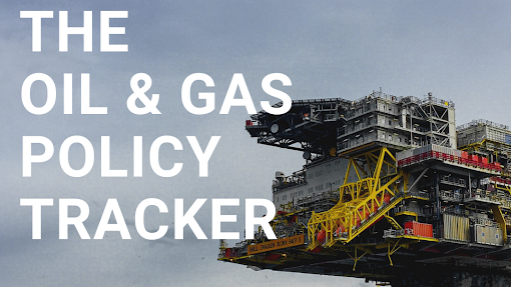 Reclaim Finance and more than 15 NGOs (1) launch the “Oil and Gas Policy Tracker” (OGPT) (2). The tool is the first of its kind: it assesses in great detail the oil and gas exclusion policies (or lack thereof) of the 150 biggest financial institutions worldwide. The Oil and Gas Policy Tracker reveals that despite many of the banks, insurers and investors pledging to tackle climate change by restricting support for the oil and gas industry, their policies are too flawed to align their business with their net zero 1.5°C targets. Reclaim Finance and partners call on financial institutions that do not want to be exposed as greenwashers to adopt robust oil and gas policies with clear red lines against oil and gas expansion.

Currently, less than half of the 150 institutions have implemented oil and gas exclusion policies. (4) The OGPT points to a significant number (5) of the heavyweights in the Glasgow Financial Alliance for Net Zero (GFANZ) which still haven’t implemented an exclusion policy on oil and gas, despite their pledge to align their portfolios with 1.5°C.

The Tracker also points to major flaws in existing policies, hindering efforts to tackle oil and gas expansion, in line with what climate science requires in order to stay below 1.5°C. (6)

● Only nine financial institutions totally exclude support for all new upstream oil and gas projects, although the IEA’s 1.5°C pathway does not include new oil and gas fields(7). Policies tend to focus on excluding support only for some unconventional oil & gas such as tar sands, Arctic, fracking and/or ultra deep waters. (8)

More worryingly, close scrutiny reveals that a growing number of financial institutions are making room for major exceptions in the fine print of their policies. For instance:

● More and more policies create exceptions for companies with “credible transition plans” or “aligned with 1.5°C by 2050'' (10). They hardly ever include clear redlines against oil and gas expansion and 1.5°C  carbon budget overshoot. (11)

● Nearly all oil and gas policies include restrictions on the Arctic (54 out of 66). However, the OGPT reveals that these policies are often deeply flawed. For instance, no more than eight financial institutions have adopted the Arctic AMAP definition as their exclusion scope. (12)

“The Oil and Gas Policy Tracker is a tool to detect greenwashing practices in the finance sector. It confirms that despite their net zero pledges, many GFANZ members don’t even have an oil and gas policy. And with one glowing exception, French la Banque Postale, those that do have a policy can still support the development of new oil and gas plans. Despite their climate pledges, they are failing the most basic test for any institution aiming to align their portfolio with 1.5°C. And as Putin’s war on Ukraine reveals, they also make the world more unstable while bankrolling future conflicts”, comments Lucie Pinson, director at Reclaim Finance.

“It’s alarming to see that almost a year after the IEA warned that no new oil and gas fields should be developed, the industry remains on its ruthless expansion course. Over 96% of the companies on our Global Oil and Gas Exit List are still developing new oil and gas assets or exploring for new reserves. The OGPT identifies the financial institutions, which keep on enabling these fossil fuel developers as well as the ones that are ahead of the curve. This work will massively increase the right kind of competition among financial institutions. It constitutes a key component in the toolbox for driving change in the industry!” comments Nils Bartsch, Head of Global Oil and Gas Exit List Research at Urgewald.

“The Oil and Gas Policy Tracker confirms what the Banking on Climate Chaos report numbers reveal year after year: the loopholes in banks’ policies are too big to stop billions from flowing to the oil and gas industry’s expansion plans. We can only hope the forthcoming 2022 edition will serve as a wake up call: banks must address those loopholes and cut off the taps for companies that are still developing new oil and gas projects,” comments Alison Kirsch of Rainforest Action Network, co-author of Banking on Climate Chaos 2022, to be released on March 30th.

“Insurance companies have warned about climate risks for almost 30 years and would like to see themselves as climate leaders. Such claims have little credibility as long as only six of the 30 biggest fossil fuel insurers have adopted any restrictions on conventional oil and gas, and only three of them rule out any support for new oil and gas expansion projects” comments Peter Bosshard, Global Coordinator of Insure Our Future.

The key findings do not take into account new policies recently released by ABP and Swiss Re, currently under evaluation.

(1) Partners of the Oil and Gas Policy Tracker include: Reclaim Finance, Amis de la Terre France, Insure our Future, Stand Earth, RAN, BankTrack, IIDMA, Urgewald, 350.org Japan, ReCommon, SFOC, ActionAid Denmark, Sierra Club, CEED, Bank On Our Future, Friends of the Earth Finland. The complete list will be available on the website on the day of the release.

(4) 66 of the 150 financial institutions have an exclusion policy. The OGPT scoring system does not take into account due diligence policies, only exclusion policies. More detail on the methodology can be found here: www.oilgaspolicytracker.org/methodology. The key findings do not take into account new policies recently released by APG/ABP, and Swiss Re, currently under evaluation.

(5) At the time of the launch, the Oil and Gas Policy Tracker assesses 74 members of the Global Financial Alliance for Net Zero. 20 of them don’t currently have an exclusion policy on oil and gas.

(6) According to the IEA’s 2021 Net Zero Pathway: “Beyond projects already committed as of 2021, there are no new oil and gas fields approved for development in our pathway.” According to the UNEP production gap report, based on the 2018 IPCC 1.5°C report, “Global fossil fuel production must start declining immediately and steeply to be consistent with limiting long-term warming to 1.5°C.”

(7) According to the IEA’s 2021 Net Zero Pathway: “Beyond projects already committed as of 2021, there are no new oil and gas fields approved for development in our pathway.” According to the UNEP production gap report, based on the 2018 IPCC 1.5°C report, “Global fossil fuel production must start declining immediately and steeply to be consistent with limiting long-term warming to 1.5°C.”

(8) On unconventional oil and gas,  the OGPT assesses policies relative to the top four of the six sectors listed in the Global Oil and Gas Exit List: the Arctic, ultra deep offshore, tar sands and fracking.

(9) According to the 2020 IEA investment report, around 90% of energy investments are financed on a primary basis from the balance sheet of companies, confirming that very few investments are raised through project financing.

(10) For instance, 4 out of the 12 policies adopted since January 2022 include exceptions for credible transition plans.

(11) Existing policies rarely define specifically their expectations for credible transition plans. In the case of the four policies with credible transition plan language adopted in 2022, none of them include redlines on expansion or carbon budget overshoot. This is a problem given there are currently competing methodologies on climate and 1.5°C alignment. The Transition Pathway Initiative for example concludes that an oil and gas company is “aligned” as long as its yearly carbon intensity levels drop to a certain level before 2050, but does not calculate whether the company’s total GHG emissions fit within the 1.5°C carbon budget. Reclaim Finance calculations find that net zero by 2050 targets of the oil and gas industry are not enough to avoid an early carbon budget overshoot.

(12) The AMAP (Arctic Monitoring Assessment Programme) is a working group of the Arctic Council in charge of monitoring pollution and climate change in the Arctic region. It is the benchmark definition used in the Oil and Gas Policy Tracker and the Global Oil and Gas Exit List, also recommended by the French Observatory for Sustainable Finance.

(13) The Coal Policy Tool was established in 2020, and now tracks and scores the coal policies of 286 financial institutions.