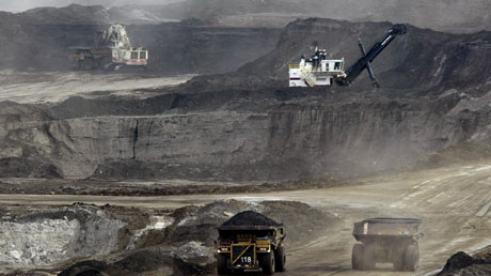 Environmental and anti-poverty groups in the UK have reacted angrily to the Royal Bank of Scotland opening an ‘oil and gas advisory' office in Calgary. RBS, which is 84% owned by the UK public has been the subject of controversy in the UK over its record of being the UK bank most heavily involved in financing fossil fuel projects and companies around the world.

Yesterday, a parliamentary transcript of the questioning was published showing that officials from the company created by the government to over see the bailed out banks, UK Financial Investments, had been vigorously questioned by MPs in a Select Committee hearing over whether or not RBS had been using public money to finance tar sands in Canada.

Speaking after the hearing, Martin Horwood, MP for Cheltenham and Environmental Audit Committee member, said:  "The Government must stop RBS using our money to drive the most damaging projects on earth. RBS is using taxpayer's money to finance projects and companies that are driving climate change all over the world. These projects include tar sands extraction in Canada that is trampling on the rights of indigenous communities and destroying pristine wilderness."

The hearing took place on the same day that questions were being asked in Parliament, RBS announced it was opening an office in Calgary that it said it would be an be an extension of its Houston practice and its oil and gas advisory in the United States.

Kevin Smith, from PLATFORM, co-author of the recently published ‘Cashing in on Tar Sands' report said:  "RBS is positioning itself to cash in on Albertan tar sands. MPs are asking questions about RBS using public money like this because UK citizens would be horrified to learn that their taxes are being used to facilitate the expansion of projects that cause such widespread ecological devastation against the wishes of First Nation communities."

Protests over RBS' involvement in tar sands financing are being planned by the World Development Movement and People & Planet to take place across the UK, including at RBS' Annual General Meeting that will take place on the 28th of April in Edinburgh.

Deborah Doane from the World Development Movement said: "We are planning protests up and down the UK because so much of our money is being used to provide finance for unsustainable tar sands extraction. These investments have a devastating impact on the lives of Indigenous communities in Canada, and are fuelling climate change, just to service the rich world's unquenchable thirst for dirty energy. The RBS decision to open a new office in Calgary to target the Albertan oil and gas market is yet more confirmation that our money is not being put where it should: towards socially useful and low carbon projects."

Clayton Thomas-Muller from the Indigenous Environmental Network said: "The concerns of First Nations peoples should not be taken lightly by RBS. Working with our partners in the UK, we will highlight how RBS is morally bankrupt in profiteering off the most destructive project on earth when we bring the tar sands issue to their shareholder meeting in April in Scotland."

The announcement was made in the Calgary Herald on 10 March 2010. See here.

In February 2010, the report ‘Cashing in on Tar Sands - RBS, UK Banks and Canada's ‘Blood oil'' showed that RBS was the UK bank most heavily involved in underwriting corporate loans to companies involved in tar sands extraction. See here and here.

The full, uncorrected transcript of the hearing can be read here.