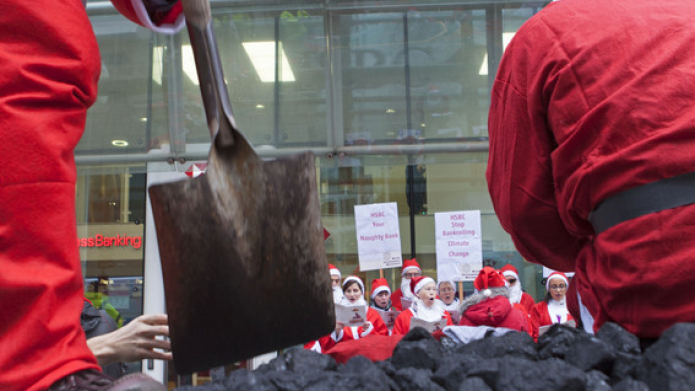 Twenty Santas delivered a tonne of coal on a dumper truck to ‘the world's naughty bank' HSBC at Moorgate in the City of London this morning to highlight the bank's massive financing of fossil fuels and to call on it to pull out of coal, the fuel most damaging to the global climate.

Protestors from the World Development Movement, dressed as Santa Claus, delivered Christmas stockings full of coal to HSBC, and sung festive songs including ‘Frosty the Banker' and ‘Deck the Halls with Dirty Money'.

Nick Dearden, director of the World Development Movement, said today: "HSBC has been a very naughty bank this year, pouring billions into dirty fossil fuels, and ignoring the fact that if we want to avoid runaway climate change, we have to keep fossil fuels in the ground. So we thought a tonne of coal would be the best Christmas present we could give the bank. Maybe it will be better behaved next year and start phasing out its financing of fossil fuels."

Notes to editors
Download free photos of the event.

HSBC has poured over £3 billion into Anglo American, Glencore-Xstrata and BHP Billiton, the companies behind the Cerrejón coal mine in Colombia. Cerrejón is Latin America's largest coal mine. It has swallowed up entire villages and is subject to fierce local opposition. If the coal remaining in this mine were to be burned it would create 13,000,000,000 tonnes of CO2 emissions - 184 times the annual emissions of Colombia. Yet most of the coal is destined for export, including to the UK.