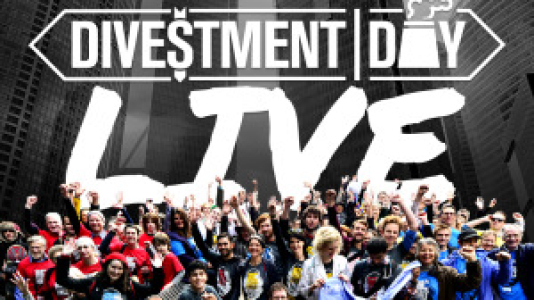 Hundreds of Australians turned out at bank branches across the country on Saturday to publicly close their accounts in protest over their banks financing of fossil fuels. Several hundred people in Melbourne and Sydney, plus hundreds more across fifteen locations around Australia and online took part in a national day of divestment action, organised by environmental advocacy groups Market Forces and 350.org.

Since 2008 the "Big Four" banks have loaned almost $20 billion to fossil fuel projects, including many in sensitive areas such as the Great Barrier Reef World Heritage Area. Concerned about the environmental and climate impacts of these projects, bank customers have been warning that unless loans to fossil fuels stop, they will take their money elsewhere. Today, hundreds of customers are making good on that commitment.

The event comes amidst a high profile public debate over moves by the Australian National University to divest from two fossil fuel companies as part of a review of its socially responsible investment policy. The move has sparked criticism from several senior cabinet ministers including Joe Hockey, Christopher Pyne and Prime Minister Tony Abbott.

"Faced with a government unwilling to take climate change seriously, Australians are taking matters into their own hands. Switching banks is a great way for Australians to align their money with their values. More importantly, it sends a powerful message to the big banks, that if they keep choosing fossil fuels, their customers will choose another bank," said Julien Vincent, Lead Campaigner for Market Forces.

"Australia is on the verge of a massive fossil fuel expansion that would turn the Great Barrier Reef into a coal and gas shipping superhighway, and destroy our chances of a safe climate future. That's only going to happen if the big banks fund it, so with this action we want the banks to know their reputation is on the line as well as the environment," said Mr Vincent.

Since the start of the campaign in 2013, the Big Four banks have lost an estimated $400 million worth of business from customers joining the fossil fuel divestment movement. The campaign has won high profile support from celebrities including singer-songwriter Missy Higgins who last week posted a Facebook message, announcing her intention to leave ANZ if they don't stop financing fossil fuels and Felix Riebl, lead singer of the Cat Empire who closed his ANZ accounts during the last divestment day.

Said Brisbane resident Chris Grogan who today closed his ANZ account and moved $250,000 to another bank: "I'm horrified to know that my bank is the biggest lender to coal and gas projects in Australia. If it wants to finance such massive harm to the environment and climate, it will have to do it without my money."

The action took place a day after 30 'Climate Warriors' from the Pacific Islands joined 300 Australians to blockade the world's largest coal port in Newcastle, drawing attention to the impacts of fossil fuel driven climate change on their countries.