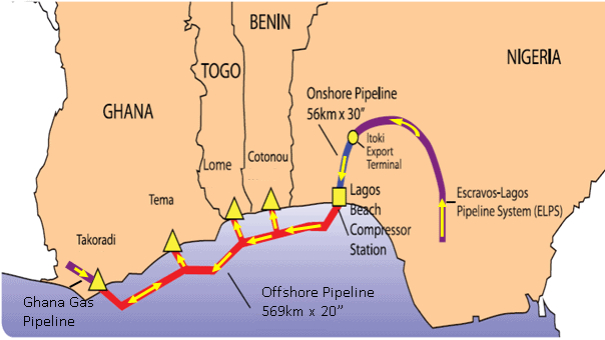 The West African Gas Pipeline (WAGP) is a 678-kilometre gas pipeline that delivers gas in Nigeria's Niger Delta to markets in Benin, Togo and Ghana, ending in the port city of Takora, Ghana. It is the first regional gas transmission system in sub-Saharan Africa and was conceived in 1982 by the Economic Community of West African States (ECOWAS). The WAGP became operational in 2011.

In 2016, an expansion of the WAGP was proposed, with an agreement being drawn up between the Nigerian National Petroleum Corporation (NNPC) and the Moroccan Office National des Hydrocarbures et des Mines (ONHYM) to construct the Nigeria-Morocco Gas Pipeline. This pipeline will connect Nigerian gas to every coastal country in West Africa, ending at Tangiers, Morocco. In June 2021, there were reports that pipeline construction had started, but evidence seems to suggest that the pipeline is still in a pre-construction phase. Construction is expected to take up to 25 years and would be completed in stages by 2046.

The West African Gas Pipeline and the Nigeria-Morocco extension is an international extraction project of concern for at least 15 countries. The zones surrounding the exploration points are usually made inaccessible, affecting fishermen, farming and other key community activities. The Nigeria-Morocco gas project will exacerbate these impacts.

Banks and other financial institutions should not provide any financing for this project. Banks should immediately end all financing for fossil fuel expansion projects like the Nigeria-Morocco pipeline expansion, and for companies expanding fossil fuel extraction and infrastructure.

Environmental groups in West Africa have expressed concerns about the pipeline project subverting the countries’ rights to seek alternative energy options, as well as strengthening the energy monopoly of oil giants Chevron and Shell in the region. In 2020, a West Africa sub-regional study was published by civil society groups from Togo, Ghana, Nigeria and the Republic of Benin. The study documented several negative socio-economic impacts linked to fossil fuel projects including the WAGP, as well as community concerns in relation to its expansion to other West African countries.

First of all, there are security measures put in place - including a restriction zone of about 1 km around the gas pipelines - that directly impact the activities of fishermen. The "forbidden zones" mean access to some key fishing areas is no longer possible. The resulting decrease in fish catch leads to lower incomes for fishermen and women fish processors, affecting communities’ livelihoods along the coast. Frontline communities that were consulted for the study expressed their fear of losing their jobs due to fish production in West Africa being impacted by fossil fuel extraction, as well as climate change. This will be exacerbated by the Nigeria-Morocco expansion along the entire West Africa coast.

Communities also had to be relocated for the construction of the WAGP. The loss of housing and lands made their lives more difficult as compensation processes proved to be inadequate. The relocation of communities from areas they are dependent on for income generation affects their income levels and increases poverty.

The emissions resulting from gas extraction contributes to global warming that is worsening the climate change impacts already felt. In the past decade, the West African coast has experienced increasing floods, damaging infrastructure as well as people's homes and assets, and upending farmers’ livelihoods. Deadly torrential rains have wreaked havoc on the coast, threatening communities and ecosystems.

Three factors contribute to the degradation of the coast: erosion, flooding, and pollution, mainly triggered by poorly designed infrastructure and inadequate management of their environmental impacts. A World Bank study details how climate change will affect Benin, Côte d'Ivoire, Mauritania, Senegal, and Togo. By the end of the century, these countries could experience a rise in sea level of more than one metre.

The World Bank warns that the West Africa coast is already at a tipping point and that climate change will be catastrophic for coastal communities, their health, the natural environment and their livelihoods. As population increases and coastal cities grow, these risks of sea-level rise and natural defences crumbling are severe. Another study focusing on African fisheries suggests that climate change will have a significant impact on Africa’s marine fisheries as early as 2050, affecting food security and revenues of those dependent on the resources for their livelihoods.

While the West African Gas Pipeline was initially estimated to cost USD 700 million, it was completed at a cost of USD 900 million.

The Nigeria-Morocco pipeline is estimated to cost around USD 25 billion. Two institutions that are funding the Front-End Engineering Design (FEED) Study for the project for both Morocco and Nigeria are the Islamic Development Bank (IsDB), for  USD 45 million in total, and the OPEC Fund for International Development for USD 14.3 million.

The project is owned and operated by the West African Gas Pipeline Company Limited (WAPCo), a limited liability company that is made up of a consortium of Chevron (36.9 %), Nigerian National Petroleum Corporation (NNPC, 24.9%), the Shell Petroleum Development Company of Nigeria Limited (SPDC, 17.9%), Takoradi Power Company Limited, a subsidiary of Volta River Authority of Ghana (16.3 %), the Benin Gas Company SA (SoBeGaz, 2%), and Togolese Gas Society SA (SoToGaz, 2%).

Chevron owns 36.9 % of the West African Gas Pipeline Company Limited (WAPCo), a limited liability company made up in a consortium.

Nigeria-Morocco Gas Pipeline Project and all you need to know

Nigeria-Morocco Gas Pipeline Project and all you need to know

The West African Gas Pipeline (WAGP) implementation agreement was signed in 2003, with construction starting in 2005. The offshore pipeline was completed in December 2006 and scheduled to begin operation in December 2007. The WAGP became operational in 2011 after several delays due to detected leaks in the supply pipelines in Nigeria.

In 2016, an expansion of the WAGP was proposed. An agreement was drawn up between the Nigerian National Petroleum Corporation (NNPC) and the Moroccan Office National des Hydrocarbures et des Mines (ONHYM) to construct the Nigeria-Morocco Gas Pipeline. This pipeline will connect Nigerian gas to every coastal country in West Africa (Benin, Togo, Ghana, Côte d'Ivoire, Liberia, Sierra Leone, Guinea, Guinea-Bissau, Gambia, Senegal, and Mauritania), ending at Tangiers, Morocco, and Cádiz, Spain.

The NNPC and ONHYM began a feasibility study for the pipeline in August 2017 and was completed in January 2019. By March 2020, the front-end engineering & design had entered the second phase.