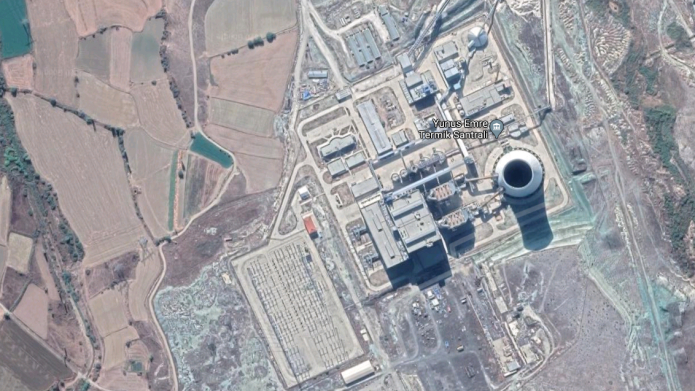 The Yunus Emre coal power plant was developed by Adularya Energy (a subsidiary of Naksan Holding) and cost EUR 700 million. The plant has a capacity of 290 megawatts (MW) and is located in Turkey in the province of Eskisehir in the village of Koyunagili.

In 2018 the Turkish Savings Deposit and Insurance Fund (TMSF) took over Naksan Holding. In May 2019, TMSF announced that it would put the plant up for sale for TRY 1.1 billion. In August 2019, it was reported that the auction had been unsuccessful and no buyer for the plant had been found. The Turkey's Energy Market Regulatory Authority (EMRA) states that Unit 1 is operating and that Unit 2 is under construction. According to CAN Europe, construction was finished in June 2016, but currently the coal power plant is not in operation.

The Yunus Emre coal power plant, when in operation, would be responsible for adding millions of tonnes of CO2 into the earth's atmosphere thereby contributing to climate change and would severely impact the environment in Turkey. The project is an example of a high level of non-transparency of Czech export credit agencies leading to suspicion of corruption.

The Paris Climate Agreement goals require a managed decline of fossil fuel production. The construction of new coal-fired power plants is not compatible with this goal. Banks must immediately stop financing new coal-fired power plant developments anywhere in the world. As such, banks should steer clear of financing the Yunus Emre coal power project.

Both the Czech and the Turkish government should immediately begin dismantling the coal power plant.

The plant will have negative effects on the air quality in the province of Eskişehir where the plant is located. While the intensity of particulate matter (PM) in many cities in Turkey is higher than WHO limits, according to the Black Report by the Turkish Right to Clean Air Platform data for air quality is not available for the Eskişehir region for the last three  years. Air quality data for the town where the coal plant project is located (Mihalıçcık) is also not available. The nearest air quality monitoring station is in Ankara, 70 kilometers away from the plant site.

Coal-fired power plants burn tons of coal each year and generate ash waste and air pollution. The air pollution is carried over distances of up to 1,000 kilometres. The province of Eskişehir is surrounded by many other coal plants which make the cumulative impact worse. Within 100 kilometres of Eskişehir, there is already coal capacity of 4,000 MW either in operation or in the pipeline; four coal plants in operation with 1,855 MW capacity (Tunçbilek CPP, Kütahya), Seyitömer CPP (Kütahya), Göynük CPP (Bolu), Çayırhan-A CPP, Ankara), coal plant projects which are in the pipeline with 1,080 MW capacity (Alpu CPP, Eskişehir) and one coal plant (Adularya Yunus Emre CPP, Eskişehir) which is under construction and partially ready to operate. As such, the risk of cumulative air pollution and health impacts is critical.

Project Adularya is an example of combination of on one hand a high level of non-transparency of Czech export credit agencies leading to suspicion of corruption, and on the other with investment into coal power plant devastating the environment in Turkey. The Czech Republic (ECAS: Czech Export Bank and Export Guarantee and Insurance Company EGAP) provided both, loan and guarantee in the amount of EUR 433 million for the construction of coal power plant to the company with limited experience with such a size of the project. Due to the non-completion of the project, the Czech Republic lost tax payers money and it should serve as the bad example of combination of corruption with climate destruction.

The EUR 700 million project has received debt finance of EUR 433 million from the Czech Export Bank.

The Savings Deposit and Insurance Fund (TMSF) of Turkey took over Naksan Holding, which means that the fund now owns Naksan and its subsidiary Adularya.

The Yunus Emre Coal Power Plant was planned  by the Adularya Energy company and received permission from the Turkish Energy Market Regulatory Board in 2008. The Czech company, Viktovice Power Engineering, became contractor of the plant to build it. The Czech Export Bank (CEB), which gives loans to Czech companies investing abroad, granted a EUR 340 million loan for the plant. The plant became the biggest Czech investment abroad. The Export Guarantee and Insurance Corporation (EGAP) of the Czech Republic insured the plant.

In 2016 member of the Nakiboğlu family (owners of Naksan holding) were arrested with the accusation of being part of the terrorist organization FETÖ's attempting coup. The Turkish Savings Deposit and Insurance Fund (TMSF) took over Naksan Holding, including Adularya Energy and the Yunus Emre Coal Plant in 2016.

The plant was completed in 2016 but operated only for a short term (slightly over 700 hours according to EPİAS). It was reported that local coal was not compatible with the plant. The location of the plant doesn’t allow to carry coal from other mining areas. The investment caused Vitkovice Power Engineering’s banktruptcy. Besides, It caused TMSF paying salaries to the workers of the plant with no income and extra TRY 2.5 million (EUR 0.3 million) for the legal and technical adaptations to extract coal from Adularya’s mining area.

TMSF went to auction for the plant three times, but no bidders were interested. TMSF offered the Czech Republic to take over and run the plant but the Czech Government didn’t accept. Together CEB and EGAP form the Czech Export Credit Agency (ECA). The cost of their loan and insurance amounting to CZK 11.7 billion CZK (EUR 340 million), is still not paid back.