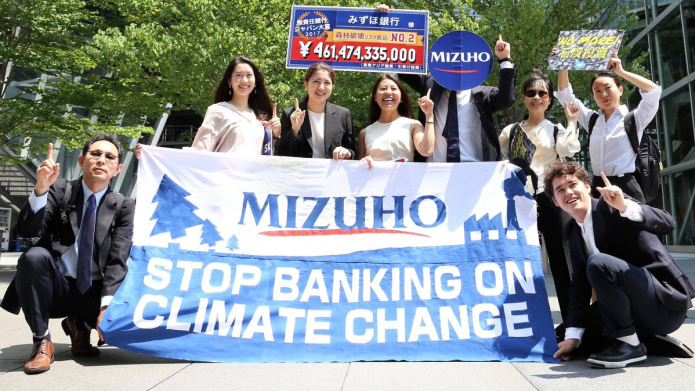 Mizuho Financial Group, Japan’s 2nd largest bank and a prominent financier of climate-destroying fossil fuels and deforestation, announced significant revisions to its policies on responsible investment and financing and adopted the strongest Environmental, Social and Governance (ESG) policies of any Japanese bank yet. The announcement comes on the heels of a shareholder resolution filed on Mizuho calling for a more progressive climate policy and years of criticism by Rainforest Action Network (RAN) and others for the bank’s reckless financing of new coal plants, pipelines, and rainforest destruction. Mizuho’s announcement was directly followed by its competitor, Japan’s third-largest bank – Sumitomo Mitsui Financial Group – announced half-hearted revisions to its ESG financing policies and failed to beat the higher standards now set by Mizuho.

In addition to Mizuho’s commitment to strengthen board-level oversight of sustainability and climate risk management, notable elements of Mizuho’s new policy include the following:

Mizuho is the third-largest banker of deforestation-driving commodities in Southeast Asia, which is home to one of the last remaining expanses of rainforests on the planet. Mizuho’s financing of pulp and paper and palm oil companies is particularly problematic, with recent financing directly linked to the 2019 forest fires in Indonesia which ravaged over 850,000 hectares of land and forest and emitted an estimated 709 million tons of GHGs. In the past five years, Mizuho has provided over USD 2 billion in credit & underwriting to the forest-risk sector operations of companies that operate in Southeast Asia. Mizuho’s main clients in this sector include Itochu, Marubeni, Oji Group, Sinar Mas Group, Jardine Matheson Group, Olam International, Wilmar, and the Salim Group. Salim Group’s flagship subsidiary Indofood, for example, is the largest food company in Indonesia with major palm oil operations, and currently receives $470 million in loans (maximum credit facility amount) from Mizuho while its palm oil plantation companies continue to be embroiled in peatland destruction and illegal labor exploitation.

According to its new policy, Mizuho will have to require its clients to adopt a NDPE policy, which means they may no longer be involved in Deforestation, in Peat exploitations nor in Exploitation of human an labour rights. In addition, companies will have to prove they have obtained Free, Prior and Informed Consent from the communities affected by their activities. Whether Mizuho continues to finance companies without such policies, and whether it will drop clients that do not comply with such policies, will be an important litmus test of the policy.

SMBC’s policy is weaker than Mizuho’s in many respects, most notably because its policy on financing commodities like palm oil, pulp & paper, and timber lack requirements for clients to have a NDPE policy or respect FPIC. SMBC slightly strengthened its forest sector policies, with now an explicit commitment in its palm oil policy to provide financial support only “after confirming that forest resources and biodiversity are protected when new plantations are developed and that there are no human rights violations, such as child labor.” SMBC also added a prohibition on the use of fire in any projects involving deforestation, which is important given the continued use of fire to clear land, which has resulted in the toxic fires.  SMBC is currently a major financier of the Salim Group and Jardine Matheson, for example.

All eyes are now on the leadership of Japan’s largest bank – Mitsubishi UFJ Financial Group, which until now had the strongest climate policy among the three banks and is expected to announce its own policy revisions within the next month.  MUFG’s highly anticipated policy revision will be met with disappointment if it does not exceed Mizuho’s new standards. As the largest bank in Japan, with significant banking operations around the world particularly in Indonesia, MUFG has a unique responsibility to institute the strongest climate and forest sector policies among these three banks and even match its global peers.

Moreover, effective implementation of these policies will be critical in addressing the dual crises of rapid climate change and unprecedented biodiversity loss and meeting all three megabanks’ commitments as signatories to the UN Principles for Responsible Banking.

This article is published at: https://forestsandfinance.org/blog/mizuho-esg-policy/