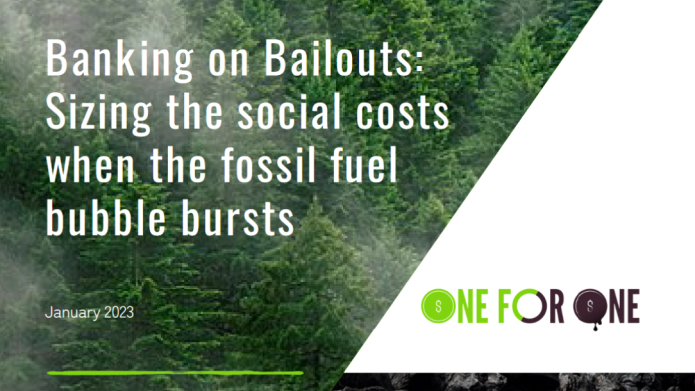 Republished from the original news item on the One-for-One-campaign website here.

Academics and economists have raised the alarm for many years about the growing risk of a fossil fuel stranded asset bubble. This means investments in oil, gas or coal exploration and extraction projects could suddenly have their value wiped out as demand drops as a result of climate change mitigation policies, changes in consumer preferences, and technology developments. A sudden drop in the value of fossil fuel assets could cause borrowers to default on their debts, in turn leaving banks and insurers insolvent and causing knock-on effects across the financial markets.

Despite the clear threat of climate change and the urgent necessity of meeting net zero targets, banks and insurers around the world continue to finance new fossil fuel projects, through lending, insurance, and both direct and indirect investment. While efforts have been made to shore up the stability of the global financial system since the 2008 global financial crisis, regulators are lagging behind in implementing rules that adequately mitigate the risks of climate change and net zero on banks and insurers.

Under the One-for-One campaign’s policy demands a 1,250% risk weighting for capital requirements should be applied all financing of new fossil fuel exploration and extraction projects such that for every dollar invested in fossil fuels, financial institutions have one dollar to cover the risk. The campaign also calls for a 150% risk weighting to applied to existing fossil fuel assets.

These measures will prevent the buildup of systemic climate risk across the financial sector by raising the costs of providing capital for fossil fuel financing relative to clean energy, incentivizing investment in the net zero transition and discouraging new fossil fuel production. Crucially, the rules will also protect against a global financial crisis stemming from a collapse in the value of fossil fuel assets, as banks and insurers will have the capital buffers in place to absorb any losses.

This report gives a global estimate, relative to the 2008 housing market crisis, of how devastating a financial crash may be in terms of job losses and the impact on public finances when the anticipated fossil fuel bubble bursts, unless capital requirement regulations are tightened.

While the actual date of the crisis and exactly how it will unfold in the markets is impossible to forecast, the report takes 2030 as the presumed year of the crash. The report also takes in two scenarios for global warming – either a trajectory that sees 2°C of global temperature rise by the end of the century, or 3.5 °C. The report finds that, without robust capital requirements in place, the socioeconomic impacts of a fossil-fuel led financial crisis will be severe, with over 13.6 million job losses expected and a global bailout of $4.9 trillion required to keep banks afloat, taking 2030 as the presumed date of the crash and under a 2°C global warming scenario.

The complete report can be downloaded here.

See also this article from The Guardian: UK could face ‘banking crisis worse than 2008’ if City fails to prepare for fossil fuel collapse.