Home › News
More than half of Europe’s bank directors too compromised to end fossil fuel finance
By: DeSmog
2021-04-07 Contact: 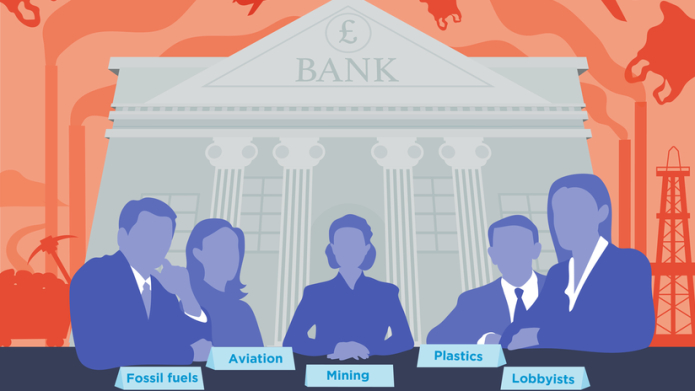 More than half of Europe’s bank directors have affiliations to highly carbon dependent companies and organisations, a new analysis has found1, raising concerns for the prospect of actually ending financing of fossil fuels.

DeSmog’s analysis revealed that 61% of directors in 15 boardrooms of major banks across the continent risk being climate-conflicted due to having held positions with polluting companies and organisations, with more than a third of those (34%) currently holding such roles.2

The fossil fuel industry is well represented on bank boards, with 17% of directors having held positions at polluting energy companies, including oil giants Shell, BP and Exxon. At five of the banks, at least 20% of the boardroom had links to companies identified by the Climate Action 100+ initiative as some of the worst global polluters.3,4 And at least one director with ties to companies involved in the extraction of coal, the most polluting fossil fuel, was found on the board of seven of the banks.5,6

Some directors had long histories of working with the fossil fuel industry, including Crédit Agricole director Caroline Catoire, who sits on the board of oil and gas exploration company Maurel & Prom. Catoire previously worked for 18 years at oil giant Total, including as the company’s Director of Corporate Finance, coinciding with Société Générale director Jerome Contamine, a current director at Total who previously worked in its exploration and production division. European oil giants Shell, ENI, Repsol and OMV were also represented through past and current ties to board members.7

Geoffrey Supran, Research Associate in the Department of the History of Science at Harvard University, said the existence of such ties is “predictable, yet shocking”.

“The fossil fuel industry has a well-established track record of ingratiating itself with society’s opinion leaders and decision makers, and because of the revolving doors between the corporate leaderships of incumbent industries. Having its fingers in all the pies allows the fossil fuel industry to quietly put its thumb on the scales of institutional decision making, helping delay action and protect the status quo,” Supran added.

Directors were also found to have extensive connections to institutions known for financing fossil fuels. The analysis revealed that over one in four (28%) directors had held positions at banks known to be major supporters of fossil fuel extraction, with 14% having held positions with investment vehicles known to support polluting activities.8

Credit Suisse had the highest proportion of directors (38%) with ties to such banks and investment vehicles, including directors with past connections to a number of the world’s largest financers of fossil fuels including Bank of America, Citigroup and Barclays. For instance, Credit Suisse director Michael Klein has used his decades’ experience in finance to advise on major oil and gas deals, including Saudi Aramco’s recent IPO. Three directors at the Spanish bank Santander had worked for JPMorgan Chase, which has provided over $317 billion in financing for oil, coal and gas projects since 2015.9

Three out of 13 (23%) of Credit Suisse’s board also had experience working for think tanks, lobby groups and other organisations that have campaigned against climate action or have connections to the fossil fuel industry, including the European Roundtable of Industrialists, which has previously opposed increasing the ambition of the EU’s carbon pricing system, and the International Chamber of Commerce which has allowed member oil and gas companies to gain privileged access to U.N climate talks.10 Other think tanks and lobby groups represented include AFEP, a powerful French group of which Total and Saint Gobain are members, and the CCE, a Mexican business group that last year worked with the government on the delivery of major infrastructure packages including new fossil fuel projects.11

While the directors’ climate-conflicted affiliations were predominantly in the finance and fossil fuel sectors, there were also notable connections to other high carbon industries. For example, nearly one in four (23%) board members at Danske Bank had links to the shipping sector,12 including the world’s largest container shipping company Maersk, responsible for an estimated 36 million tonnes of CO2 emissions a year.13  And more than a quarter (27%) of directors of Spanish bank BBVA had worked with aviation companies,14  while in Intesa Sanpaolo’s boardroom, one in four directors (26% of the board) held ties to the road transport sector including major car producers Fiat and General Motors.15

The full press release can be viewed here.

DeSmog is an investigative journalism platform dedicated to uncovering corporate wrongdoing on environmental issues. The UK team was established in 2014, with its investigations regularly being featured in mainstream media across the world. See www.desmog.co.uk.