Home › News
Société Générale: an approach to be completed to stop the development of fossils fuels
By: Reclaim Finance
2020-10-28 Share this page: 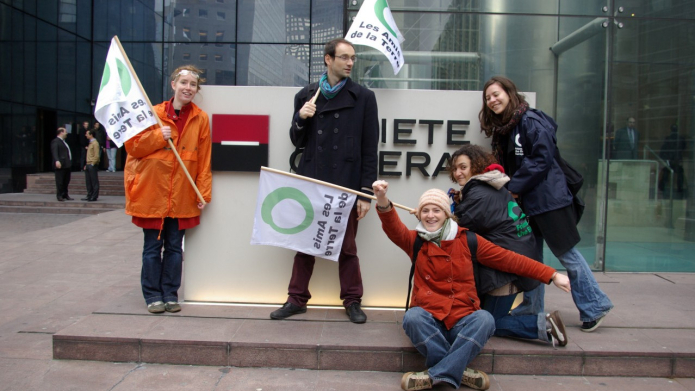 1. This commitment relates only to the bank’s loans and automatically overlooks a large part of the financial services provided to the oil and gas sector, starting with equity and bond issues.

According to the financial data we have access to on big banks’ support for fossil fuels, oil and gas/fossil fuel companies depend on loans as on share and bond issues to raise capital (see the Banking on Climate Change Report).

2. Exposure, which measures stocks rather than flows, is not the most relevant indicator in a climate emergency context where radical changes need to be made in the direction of financial flows to the energy sector.

A study conducted by the Rainforest Action Network found that some major US banks increased their financing to the 50 largest coal producers after committing to reduce their exposure to the sector.

3. Finally, it should be remembered that the commitment made by Société Générale relates only to the production of hydrocarbons and neglects a large part of the sector as a whole, i.e., transport and transformation activities.

The inconsistency is flagrant when Société Général is financing transport infrastructure essential for the opening up of new fossil fuel reserves upstream of the chain. This is the case, for example, of the shale gas export terminals in the United States, where it is one of the world’s leading financiers with USD 4.6 billion of financing to the sector between 2016 and 2019.

5. Société Général declares more widely to aim to align its activities with the IEA’s Sustainable Development Scenario (SDS), which is notoriously insufficient to align the bank’s activities on a 1.5°C trajectory.

For Yann Louvel, political analyst for Reclaim Finance:
“As partial as it is partial, the oil and gas exposure indicator used by Société Générale does not automatically imply a decrease in its financing to the sector. If Société Générale wants to play a leadership role in the energy transition, as it claims, it must immediately exclude all companies in the riskiest sectors, starting with those developing new projects”.