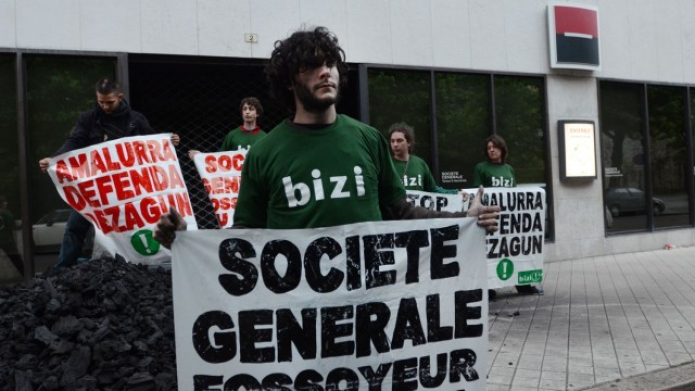 Less than two weeks before the start of the United Nations Climate Summit (COP21) in Paris, new approaches to coal financing announced by top French banks BNP Paribas today and Société Générale yesterday have been described by bank campaign organisations BankTrack and Les Amis de la Terre - Friends of the Earth France as "a good start but still lacking in ambition". This is in spite of the welcome introduction of new financing criteria that sees both banks reducing their support for coal mining and power as well as committing to boost their financing for renewable energy.

Unlike another French bank, Natixis, which recently announced that it is stopping direct financing for all coal plants around the world, BNP Paribas and Société Générale have also confirmed that they will continue to consider financing for coal-fired power plant projects in lower income countries.

BNP Paribas has also announced that it is ending its general funding for companies specialising in coal mining enterprises which have no diversification strategy. The bank, currently France's number one coal finance bank according to BankTrack research, has further said it will only provide financing for "power generation companies that have a formal diversification strategy to reduce the share of coal in their power generation mix that is at least as ambitious as that of their host country."

Société Générale has committed on its side to "reduce the group activities in the coal sector with a view to being in line with the International Energy Agency's 2 degree scenario by 2020", but it remains to be seen how this general statement will concretely translate in terms of banking activities.

"BNP Paribas and Société Générale have made promising new commitments to double their financing for renewable energy investments in the coming years. The issue remains, however, how much more could France's top banks, including also Crédit Agricole, be doing to ensure the clean energy transition takes place rapidly if they weren't still wedded to coal investing around the world in various guises.

"In their respective approaches, BNP Paribas and Société Générale have begun to disentangle themselves from the biggest climate threat. However, the concrete implementation of their commitments will be crucial since general corporate lending and underwriting comprise almost all of the financial support of these banks to the coal sector, with 15.6 billion euros from BNP Paribas and 5.5 billion euros from Société Générale flowing out between 2005 and April 2014. We will continue to extend our invitation to them to sign up to the Paris Pledge in order to bring about an end to their coal financing for good."

"New coal plants cannot be built anywhere if we're to limit the increase in global temperature to below 2°C, yet BNP Paribas and Société Générale are only ruling out their support for them in high income countries.

"Looking at BNP Paribas, after more than a year of campaigning from Friends of the Earth France and our partners for the bank to end its support for the coal industry, we welcome these first commitments. But BNP Paribas, a COP21 sponsor after all, cannot stop here. Friends of the Earth France and our international partners will publish a comprehensive assessment of the commitments of French and international banks during COP21. This will lay out new data showing the extent of the coal financing still present at banks such as BNP Paribas and how they must move up a gear in order to respond to the climate emergency. BNP Paribas has also been nominated for the Pinocchio Climate Awards, and we hope that further encouragement from the public will inspire the bank to take comprehensive climate action."

1. See Société Générale press release, Nov 18; BNP Paribas press release, Nov 19
2. According to the Global Coal Plant Tracker database, 6% of coal plants seeking permission or permitted since 1 January 2010 are in so-called high-income countries, according to the World Bank classification.
3. "Natixis becomes second French bank to cut coal financing", BankTrack, 15 October 2015
4. A breakdown of BNP Paribas and Société Générale coal financing for 2005 to April 2014 is available at: http://coalbanks.org; see also the Paris Pledge campaign site, including details of the 18 international signatory banks to date: http://dotheparispledge.org/
5. Information about the Pinnochio Climate Awards can be found at: http://www.pinocchio-awards.org