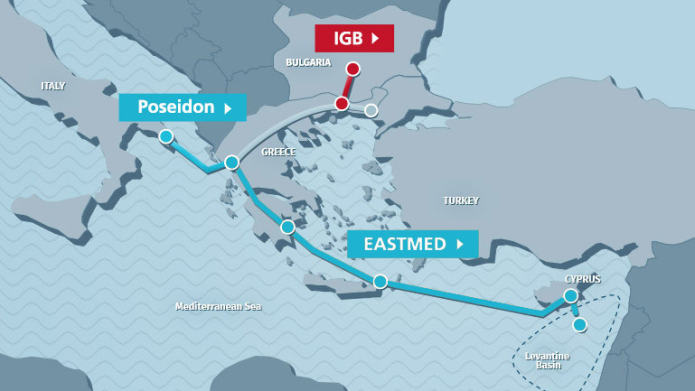 The Eastern Mediterranean (EastMed) Pipeline project is a planned off- and onshore gas pipeline that would transport gas from Israel and Cyprus via Crete to mainland Greece. If the project proceeds, at 1,900 kilometers it will be the largest offshore gas pipeline in the world. In its initial phase it would transport 10 billion cubic meters of gas per year from offshore gas reserves in the Levantine (Israel) and Aphrodite (Cyprus) gas fields to Greece, where it would link up with the proposed Poseidon gas pipeline which will transport the gas to Italia. IGI-Poseidon, a 50:50 joint venture between the Public Gas Corporation of Greece (DEPA) and Edison International Holding, is the developer of the EastMed Pipeline, and is also developing the connecting Poseidon and IGB pipelines.

With an estimated cost of at least EUR 6 billion, it would be one of the most expensive pipelines in the world. Despite this huge cost, its location across an earthquake-prone region, and its geopolitically sensitive nature, the EastMed Pipeline has already received support from the European Union for its preliminary studies. A final investment decision is expected in 2022, with the commissioning date set for 2025.

The construction of new fossil fuel infrastructure such as the EastMed pipeline is incompatible with meeting the 1.5 degree climate target set out in the Paris Climate Agreement. The gas transported through the pipeline would produce 19 million tons of CO2 in phase one and double that amount in phase two. Further, the pipeline would be built through an earthquake-prone region, and risk exacerbating political instability in the region.

Financial institutions should be aware of the risks and weaknesses of the project and avoid any financial support or other involvement.

The EastMed pipeline risks increasing military tensions in the region. Turkey opposes the EastMed pipeline as it competes with the TANAP pipeline that is already transporting Azerbaijani gas to Europe. In a deal with Northern Cyprus that gave Turkey permission to drill for oil and gas in the region, they refused to acknowledge the republic of Cyprus. Drilling vessels of all countries in the region are now regularly escorted by warships. Since, Turkey has been sending drilling ships into these disputed waters, that will also be part of the EastMed route.

Furthermore, one of the main beneficiaries and proponents of the project is the Israeli government. The Israeli government has occupied Palestian territories where human rights are regularly violated. It also refuses the Palestinians and their gas reserves in the waters of Gaza to be part of the EastMed pipeline.

Climate impact The EastMed Pipeline project would lock Europe deeper into gas dependency, threatening the EU's climate commitments. The EU is projected to reduce its use of natural gas by a quarter from 2015 levels by 2030 and 90% by 2050. Its current gas infrastructure is already more than enough to supply this demand of natural gas, meaning the EastMed pipeline is not needed. As data science company Artelys noted in a 2020 report on behalf of the European Climate Foundation, additional gas infrastructure represents 'a potential overinvestment of tens of billions of Euros, supported by European public funds'.

While the gas industry promotes gas as a “transition fuel”, this does not stand up to scrutiny. Gas emits about half as much CO2 as coal at the smokestack, but substantial amounts of gas - which consists predominantly of the highly potent greenhouse gas methane - are released into the atmosphere throughout its life cycle. Recognising this, the IEA acknowledges that there is no need for new fossil fuels in a 1.5 degrees world.

The EastMed Pipeline is designed to transport 10 billion cubic meters (BCM) of gas per year in phase 1 and up to 20 BCM per year in phase 2, which would lead to 19 and (up to) 38 million tons of CO2 emissions per year, respectively. If operating at full capacity till 2050, the EastMed Pipeline may have transported 500 BCM in total to Europe, leading to some 950 million tons of CO2 in total. This does not consider likely leakages of methane gas along the pipeline’s length.

The project stretches over an earthquake prone region near Crete and reaches a depth of over 3,000 meters. This is likely to greatly increase the risk of failures and leaks in the pipeline.

Political issues The EastMed project is presented by the proponents as a catalyst for peace. However the project’s location in the Levantine basin places it in the middle of an area of highly sensitive political tensions, including between Israel and Palestine, Israel and Lebanon, and Cyprus and Turkey. Gas discoveries have been adding to these tensions, with disputes over maritime boundaries, sovereignty, and ownership of gas reserves. For example the Aphrodite gas field - the biggest Cypriotic field – is contested between Cyprus and Israel, as it’s tip stretches into Israel’s maritime zone.

DEPA and Edison each have a 50% equity investment in IGI Poseidon, which has share capital totaling EUR 61.6 million. Funding for the remainder of the EastMed Pipeline ‘s EUR 6-7 billion costs has not yet been secured.

IGI Poseidon is the developer of the EastMed pipeline, together with the Poseidon Pipeline and the IGB Pipeline. IGI Poseidon is a 50:50 joint venture between the Public Gas Corporation of Greece (DEPA) and Edison International Holding.

EastMed faces another challenge next week

For Israel and Turkey, it’s now all about gas

Turkey has opposed the project from the start, claiming that the project ignores its equal rights over the natural resources in Cypriot territorial waters. Furthermore, the project passes through the exclusive economic zone on Turkey's southern Mediterranean shore that Turkey and Libya created in December 2019. The EastMed Pipeline would also compete with Turkey’s TANAP pipeline, which brings Azerbaijani gas into Greece and Europe.