Home › Campaigns
Banks and forests
By: BankTrack
Share this page: 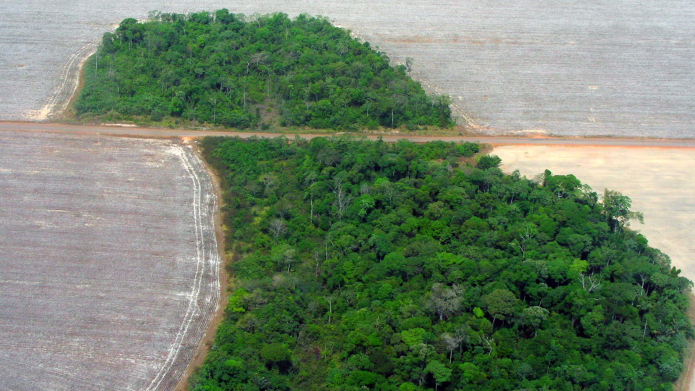 On hold: work on this campaign has stopped for now

Forests play a crucial role to sustain life on earth. Apart from their intrinsic value and beauty, forests perform a wide range of essential ecological functions without which humans and other species could not survive. Tens of millions of people in the world also call forests their home and depend on them for livelihoods.

Despite their value for human beings and the global environment, forests continue to be destroyed at unprecedented rates, and with it the ten thousands of species essential for life to flourish on earth. Only around 30% of the earth's land surface - almost 4 billion hectares - is covered by forests. Of this total forest area, around 271 million hectares are not natural forests but wood plantations and semi-planted forests. The speeds of deforestation may have slowed down during the current decade, yet forests are still being cleared much faster than they can regenerate themselves. In addition to full deforestation, large areas of tropical, temperate and boreal forests are each year significantly degraded due to over-exploitation.

Drivers of deforestation and forest degradation

Everywhere, forests are under threat from a range of factors:

Banks and other financial institutions can play a crucial role in the protection of the worlds' remaining forests, by committing themselves to a zero deforestation goal, ensuring that they will not finance any business activities that lead to further deforestation, especially the further disappearance of old growth forests. When banks operate in sectors with a potentially strong impact on forests, such as agriculture, mining and the forestry sector itself, they should develop stringent investment policies that ensure this. BankTrack and Environmental Paper Network developed guidance for such policies for banks and investors active in the pulp and paper sector.

Role of BankTrack/aim of this campaign

BankTrack's Banks and Forest campaign focuses on the financiers of important initiators of deforestation, with the aim to push banks to act more responsibly regarding their forest-related investments. The long-term goal of our work is to help ensure that private sector banks no longer finance companies, projects and business activities that cause a large negative impact on forests. Within the forest campaign we focus primarily, but not exclusively, on the pulp & paper and palm oil sectors.

forestry - pulp and paper
There are no projects active for Banks and forests now.
On record

agriculture - palm oil
There are no companies active for Banks and forests now.
On record

“Responsible” investors under scrutiny for investing in climate-destroying banks

Indonesia's plans to protect its peatland forests are fatally flawed

Indonesian civil society writes to banks: APRIL failing to implement its own policy

Over 80% of future deforestation confined to just 11 places

Assessing the implementation of China's Green Credit Guidelines
2014-11-25 00:00:00 | BankTrack, Friends of the Earth US
csr policies

RAN's website on the banks and investors exposed to deforestation risks in Southeast Asia, including a database, policy assessment and case studies.