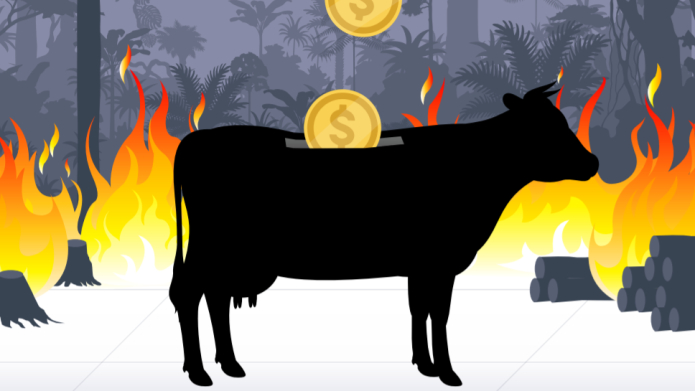 A new report from Global Witness shows how major Brazilian meat traders are failing to remove huge swathes of Amazon deforestation from their supply chains, which flawed audits by DNV-GL and Grant Thornton then did not pick up. Meanwhile, big banks like Barclays, Morgan Stanley, HSBC and Santander continue backing them, despite many warnings of their destructive practices.

Global Witness reveals today that international auditors DNV-GL and Grant Thornton have effectively legitimised devastating illegal deforestation by three of the world’s largest beef producers - JBS, Marfrig and Minerva. Today’s report is the first systematic analysis of these beef companies’ audits, exposing how the auditors have failed to identify the scale and regularity of deforestation in supply chains. Our findings show that tens of thousands of football fields’ worth of deforestation was contained in the ranches linked to these meat traders between 2016 and 2019, contravening their legal obligations and the terms of non-prosecution agreements they have with Federal Prosecutors in Brazil.

JBS, Marfrig and Minerva’s environmental destruction was rewarded by major UK, EU and US-based banks that financed them to the tune of almost $4bn over the period analysed. Household names such as Deutsche Bank, Santander, Barclays, Morgan Stanley, BNP Paribas, ING and HSBC all seemingly failed to do meaningful due diligence on their exposure to this deforestation, and continue backing the companies today despite many warnings of their failures. The beef sold by these companies is also ending up on the shelves of well-known high street stores and brands, including Burger King, Sainsbury’s, Subway, McDonalds, Walmart, Carrefour, and Nestle, exposing consumers to the risk that the products they buy are linked to the destruction of the Amazon.

“Global Witness’s investigation lifts the lid on how a system of complicity, wilful blindness and incompetence has grown up around industrial beef production. We see it at every point along the global supply chain,” said Chris Moye, Senior Amazon Forests Investigator at Global Witness. “Every player - from the ranches that raise cattle, to the goliaths of Brazil’s beef industry, their iconic financial backers, supermarkets, importers and fast-food chains - are either destroying rainforests or are complicit in their destruction, with flawed audits undertaken by US and European auditors,” he continued.

“These actors cannot plead ignorance - backing beef supply chains in the middle of the Amazon is a predictably high-risk business, especially when you are dealing with companies with very poor environmental track records like JBS, Marfrig and Minerva. If your business is failing to do proper due diligence and profiting from these meat traders’ destructive practices, you are part of the problem,” Moye added.

These findings come as the Amazon is being destroyed at an alarming rate, with the rollback of forest protections by the Bolsonaro government, reduced enforcement during COVID-19, and another devastating fire season creating a perfect storm. Deforestation in the Brazilian Amazon has risen dramatically throughout 2019 and 2020, making both years the highest rate of deforestation since 2008.  A massive 70% of this destruction has been caused by land being cleared for cattle ranching. Beef production in Brazil is reported to be the leading driver of deforestation emissions across the entirety of Latin America.

“The auditors, financiers and retailers linked to the rapacious Amazon deforestation being carried out by these beef giants are all helping fuel the destruction of this vital ecosystem and carbon sink, implicating faraway customers and bank account holders in the process,” said Moye.

“From cattle ranch to consumers’ baskets, this system is broken. Our investigation clearly demonstrates that relying on an unregulated private sector with voluntary no-deforestation policies has failed to tackle forest destruction and related human rights abuses. This could contribute to the permanent loss of the Amazon rainforest,” Moye added.

Preserving tropical rainforests is critical to help stop climate breakdown and to protect the local communities and indigenous people who depend on and defend them. Moreover, the Covid-19 pandemic has brought into sharp relief the importance of preserving biodiversity hotspots like the Amazon in order to prevent the spread of zoonotic diseases.

In the absence of the necessary laws in consumer countries and financial hubs like Europe and the US, banks, investors, credit rating agencies, importers and supermarkets can continue profiting from devastating deforestation and face no consequences.

“Governments must take action and ensure that all businesses, including banks, are held accountable for their role in the destruction of the Amazon by requiring mandatory due diligence on deforestation risk,” Moye concluded.

The UK government recently introduced draft legislation prohibiting the use of certain commodities associated with deforestation by large companies and requiring them to undertake due diligence on deforestation risk in their supply chains. However, these proposals currently fall short as they let finance off the hook and allow forest destruction to continue as long as it is deemed ‘legal’ under local laws. The EU is currently consulting on potential new rules on deforestation in EU supply chains. Global Witness is calling on the UK and EU to ensure these laws are fit for purpose.

Global Witness is also calling on JBS, Marfrig and Minerva to adopt full supply chain transparency in order to enable public scrutiny of which ranches they buy cattle from. Until such measures are in place, no financier or buyer can rely on company assurances that their forest-related commitments are in place.

All of the beef companies, banks and auditors featured in the report were approached for comment (see Notes to editor below).