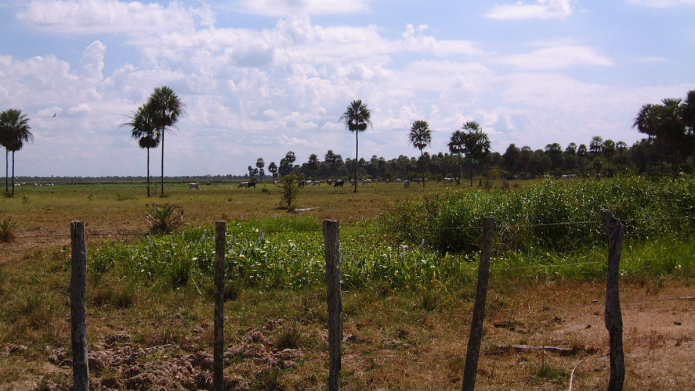 Minerva Foods is a Brazilian livestock company and one of the largest South American companies involved in the production of beef and its by-products, meat processing, and cattle export. The company operates 25 slaughterhouses, 10 of which are in Brazil, five in Paraguay, five in Argentina, three in Uruguay, and two in Colombia, with a combined slaughter capacity of 26,180 head of cattle per day. Minerva exports to more than 100 countries and operates 14 distribution centres in South America.

Minerva is Brazil's second-largest beef exporter (behind JBS), exporting largely to the US and Europe. Between August 2018 and June 2019, Minerva's meatpacking plant in Mirassol d'Oeste, Mato Grosso, Brazil exported 18,625 tons of beef products worth more than US$ 100 million, of which 12.5% went to the EU including Denmark, Germany, Italy, the Netherlands, Spain, and the United Kingdom, according to a study by Greenpeace Brazil.

Minerva has major operations in the Amazon rainforest, where together with Marfrig and JBS it accounts for around 70% of all cattle slaughtered. Minerva also operates slaughterhouses in the world's most biodiverse savannah, Brazil's Cerrado Biome. Minerva's Amazon slaughterhouses were found to be potentially buying cattle from almost one million hectares of land at risk of deforestation, areas embargoed by the Brazilian Institute of Environment and Renewable Natural Resources (IBAMA), and areas deforested between 2010 and 2015.

Although Minerva signed a Term of Conduct Adjustment (TAC) with the Federal Public Ministry in 2009 to adhere to "Minimum Criteria for operations with cattle and bovine products on an industrial scale in the Amazon biome" and signed Greenpeace's Cattle Agreement to commit to zero-deforestation in the same year, the company still does not have a system for monitoring secondary and tertiary suppliers, and so does not exclude suppliers that continue to clear forests, that use slave labor, or that invade indigenous lands and other protected areas.

Banks should not renew or take on new financing agreements with Minerva until and unless it fully eliminates deforestation and land rights abuses from its entire supply chain, as the company is highly implicated in deforestation in the Amazon.

The cattle industry in the Chaco region of Paraguay, where a great part of Minerva’s cattle is sourced from, has been linked to reports of slave labour, child labour, and encroachment into indigenous lands, including by the UN Human Rights Council. The growth of beef production in the Paraguayan Chaco over the past years has been based on the exploitation of indigenous workers. Minerva has a Paraguayan subsidiary, Frigomerc, which owns an export-oriented slaughterhouse in the Chaco. The company's commitments with regard to slave labour, violence, and invasion of indigenous territories only apply to production from Brazil. None of the five top exporter groups in 2018 in Paraguay, including Minerva, has made any public commitment to eliminate forced labour and child labour from their supply chains.

Deforestation In the Amazon alone, 80% of current destruction is driven by the cattle sector. The rainforest is deliberately cleared so the cows can be raised in the region. In the Brazilian Amazon, there are around 85 million cows, the equivalent to approximately four cows per inhabitant in the region.

In 2009, the Minerva signed a legally binding settlement agreement (Term of Conduct Adjustment - TAC) with the Federal Prosecutors Office commiting not to source cattle from areas associated with deforestation ("Minimum Criteria for operations with cattle and bovine products on an industrial scale in the Amazon biome"). The company also responded to an investigation by Greenpeace on the link between deforestation and cattle farming in the Amazon with a zero deforestation commitment, the Cattle Agreement. Although Minerva has committed to measures for forest protection, the company still fails on their zero deforestation pledges.

A study published in 2017 by the NGO Imazon found that Minerva's Amazon slaughterhouses could be buying cattle from almost one million hectares of land at risk of deforestation, areas embargoed by the Brazilian Institute of Environment and Renewable Natural Resources (IBAMA), and areas deforested between 2010 and 2015. According to the same study, the company figures in the 10th place in the ranking of 81 companies in terms of exposure to three risks associated with deforestation in their potential buying zones in the Brazilian Amazon in 2016. It has identified 931,000 hectares with some type of risk in the potential buying zones of Minerva’s Amazon plants.

Furthermore, a recent report (2020) from Greenpeace has found that Minerva has indirectly sourced cattle from farms that deforested a unique and biodiverse protected Amazon reserve, the Sierra Ricardo Franco Park, in Brazil’s state if Mato Grosso, on the border with Bolivia. State prosecutors said that since the park was created in 1997, the region where three farms in Sierra Ricardo Franco Park are located (Paredão I, Paredão II, and Cachoeira) were cleared, with thousands of hectares illegally deforested.

Minerva has bought cattle from a farm outside the reserve (Barra Mansa farm) that had sourced livestock from two farms inside it (Paredão I and Paredão II). For Minerva in Mirassol D’Oeste, Barra Mansa sold at least 2,000 animals between August 2018 and June 2019, showing that the company had its supply chain contaminated by deforestation and cattle ranching within a conservation area. During the same time, Minerva’s meat packing plant in Mirassol d’Oeste exported 18,625 tons of beef products worth more than $ 100 million, of which 12.5% went to the EU including Denmark, Germany, Italy, the Netherlands, Spain and the United Kingdom, based on shipping data based on export documents.  The owner or part owner of the Paredão farms was charged with environmental crimes inside the 159,000-hectare reserve.

Furthermore, Minerva sources much of its beef from the Gran Chaco region, in Paraguay, which has been experiencing intensive deforestation largely due to cattle ranching. Between 2010 and 2018, the Paraguayan part of the Chaco biome lost more than 2 million hectares of native vegetation, largely due to the expansion of cattle pasture. The Dry Chaco region particularly has seen some of the highest rates of deforestation worldwide in the past decade. Minerva’s Paraguayan subsidiary, Frigomerc, owns an export-oriented slaughterhouse on the edge of the Chaco. In 2018, according to the platform Trase, the company’s exports accounted for almost 70% of all cattle deforestation risk among Paraguayan exporters. In addition to this, the company’s zero-deforestation commitment only applies to the Amazon biome.

Irregularity and lack of transparency in the supply chains Since 2014, Minerva has made public the results of independent audits made to test their systems for purchasing cattle from the direct supplying ranches in the Amazon biome. The 2016 audits found that Minerva does not adopt any system for verifying the indirect suppliers (breeding and rearing ranches that sell to the fattening ranches).

By 2018, Minerva had four slaughterhouses in the Amazon where they should implement the TAC restrictions. In the same year, the Amazonian state of Pará published an audit of Minerva and other companies, which found that the company reached compliance of 99.7% regarding direct suppliers. However, an independent audit again noted that Minerva does not have any monitorable and verifiable traceability system for its indirect suppliers to monitor all cattle purchases in the Amazon biome, including the supply chain links preceding the fattening ranches that supply to the slaughterhouses.

Authorities of the Federal Prosecutor Office in the Amazonian state of Pará have stated that there are no companies buying cattle from the Brazilian Amazon that is able to affirm their supply chain is deforestation-free. Minerva is one of these companies and a key actor in allowing the beef industry to grow at a fast pace in Brazil, therefore contributing to the main driver of Amazon's destruction.

The twenty largest U.S. and EU shareholders of Minerva hold over 8.1% of the total shares in the company, valued at USD 45 million. Within this set of companies, BNP Paribas, Credit Suisse, Vanguard, and Invesco hold the most significant equity investments in Minerva.

Five commercial banks – HSBC, Bank of America, Credit Suisse, JPMorgan Chase, and Santander, have provided a total of USD 1.8 billion in underwriting of bond issuances to Minerva between 2013 and 2018. See below for more details.

Analysis: Do the meat industry’s promises on deforestation add up?

The world’s biggest meat suppliers, JBS, Marfrig and Minerva have committed to cleaning up their supply chains by 2030. But a guest analysis from Repórter Brasil shows a lack of transparency and systems that are vulnerable to fraud.
2022-07-04 | Unearthed
blog
external news
our news

Banks and pension funds among investors bankrolling meat and dairy

Audit of the State of Pará