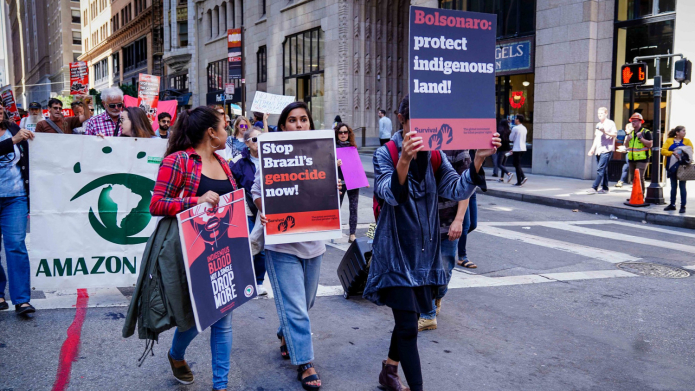 JBS, established in 1953 in Anapolis, Goias, is a Brazilian company that is the largest meat processing company in the world (based on sales), producing factory processed beef, pork, and poultry products, and also selling by-products from the processing of these meats. Its products are distributed under various brand names, such as Friboi, Swift, Bertin, Pilgrim's, and others. The company also operates related businesses, such as leather, biodiesel, personal care and cleaning, solid waste management, and metal packaging. It has 400 production units, facilities, and offices, of which 230 are used for the production of beef, pork, lamb, and poultry products. JBS is headquartered in São Paulo and has 150 industrial plants around the world.

Banks should not renew or take on new financing agreements with JBS until and if it fully eliminates deforestation and land rights abuses from its entire supply chain, as the company is highly implicated in deforestation issues in the Amazon.

A common issue in the livestock industry is the use of slave labour. According to the Cattle Agreement, purchases from properties caught using slave labor or located on indigenous lands and conservation units should be blocked. Under the TAC agreement (Termo de Ajuste de Conduta), signatory meatpackers undertake to buy only cattle from farms without histories of illegal deforestation after July 2008, and they must also avoid animals from properties located in Protected Areas or those included in the “dirty list” of slave labour – a federal government register that lists employers caught perpetrating this type of crime.

However, JBS sources its cattle from at least two farms that use slave labour. These are the Três Rios farm - in which eight workers who were in conditions of slavery were rescued in 2003 by federal government’s labour inspectors - and the Brasilia farm, whose rancher was charged with employing slave-like labour in 2008, while also being fined for environmental crimes at least 13 times between 2007 and 2016, totalling about R$ 104 million in debts.

JBS's supply chain is also linked to the encroachment of indigenous lands. In August 2019, Ibama (Brazilian Institute of Environment and Renewable Natural Resources) found cattle linked to the Três Rios farm in Canarana (state of Mato Grosso), being raised in an indigenous territory neighbouring the farm. The rancher's family (Pedreschi) raises cattle in a large area of that municipality, located in the transition between the Cerrado and the Amazon rainforest. According to official records, they own four contiguous farms, totalling 8,500 acres. The properties border the Naruvôtu Pequizal Indigenous Land, sanctioned by presidential decree in 2016. But a July 2019 Ibama inspection showed that the area occupied by pastures was in fact much larger. The inspectors found that Aldo Pedreschi Filho was raising thousands of animals within the neighbouring indigenous land. The damage caused by the activity reached an area of 5,390 acres – almost 10 percent of the total area of the Pequizal do Naruvôtu Indigenous Land. As a result, Aldo Pedreschi Filho was fined R$ 10.9 million. The Mata Linda, Bela Vista, and Lago Grande farms, that also belong to the family, are bordering the Indigenous Land.

Animal agriculture Meat and dairy products have the greatest damaging effects on the environment. Animal agriculture - livestock and animal feed - is responsible for approximately 60% of food-related climate emissions and is the most significant driver of deforestation. Much of this forest conversion occurs in South America, particularly in the Amazon but also in dry woodland biomes such as the Gran Chaco – South America’s second-largest forest – and the Cerrado.

Deforestation Two agricultural activities, cattle ranching and soy production, are the leading drivers of deforestation in Brazil. Ranching alone leads to approximately 80% of Amazon deforestation, with 80% of Amazon forests cleared since 2014 being occupied by cattle. Brazil’s cattle herd exceeds 200 million heads and generates USD 123 billion annually. The economic and environmental implications of these commodities extend to the global market: Brazilian soy accounted for 14.3% of the country’s total exports, generating USD 31 billion in 2017 while cattle exports accounted for about USD 5.4 billion.In fact, Brazil leads the world in exports of both commodities. If the world continues to provide a market for these commodities, these industries will enjoy considerable economic incentives to aggressively expand activities to the detriment of forest protections and indigenous land rights.

JBS, Marfrig and Minerva are the three leading beef processors in Brazil and have major operations in the Amazon, where they account for around 70% of all cattle slaughtered. JBS, in the position of largest meat processor in the world based on sales, has an outsized deforestation exposure in its Brazilian beef supply chain. The company's monitoring system is limited to its direct cattle suppliers, and it does not yet have systems in place to systematically monitor its indirect suppliers.

Illegal deforestation In March 2017 the Brazilian government fined JBS, for more than BRL 24 million for buying cattle from illegally deforested areas in the Amazon. The purchase of cattle from illegally deforested areas is an environmental crime and the government finding indicates a breach in the Plea Agreement (Termo de Ajuste de Conduta - TAC) signed in 2009 between the Federal Public Ministry and 69 companies, including JBS. Following the pressure of civil society campaigns, JBS has also signed the voluntary Zero Deforestation Cattle Agreement, in which it has committed to excluding source farms involved in any deforestation, slave labor, or invasions of indigenous lands and protected areas. Despite its measures, JBS continues to be linked to illegal deforestation in its supply chain, and an unspecified proportion of JBS' supply chain deforestation footprint may be in violation of Brazil's Forest Code. JBS was found to have purchased cattle from illegally cleared farms in Rondonia and Para. In July 2020, in Mato Grosso, JBS transported cows from embargoed farms to "clean" farms that met JBS' sourcing protocols. In 2017, JBS was fined BRL 24 million (USD 4.3 million) for buying cattle from illegally deforested areas in Para, although the company has appealed this fine.

Corruption accusations The scale of allegations of bribery against JBS stretches from meat inspectors to the highest office in Brazil. Operation Car Wash was set up to investigate the bribery scandal that engulfed the Brazilian oil firm Petrobras in 2014. An astonishing network was revealed, stretching far beyond a single company and ultimately bringing down the Brazilian government. Agriculture has long held sway over Brazilian politics — many lawmakers are farmers — but Operation Car Wash suggested that influence was backed by systemic graft. When the scandal reached JBS’s holding company, Joesley and Wesley Batista, along with five other executives, signed a plea deal in May 2017, admitting bribery of politicians. Four months later the brothers were arrested on allegations of insider trading. In November 2018, Joesley Batista was arrested again, accused of bribing officials in 2014. Even now, the Batistas’ holding company is under investigation over potential involvement in alleged collusion between executives, politicians and public servants to divert resources from a government-owned bank (The Bureau of Investigative Journalism).

In May 2018, JBS and a group of banks - Banco Bradesco, Banco do Brasil, Bank of China and Caixa Economica Federal - agreed on a debt normalisation totalling BRL 12.2 billion (JBS Financial Statements Q4 2018). See below for more details.

Spoof Santander posters appear across Glasgow ahead of COP26

Spoof Santander posters have been appearing across Glasgow in an effort by climate campaigners to highlight the bank's funding of fossil fuels ahead of COP26.
2021-10-29 | Glasgow | The National
blog
external news
our news

Behind the curtain of the JBS net zero pledge

JBS shows SLB label is nothing without scrutiny

"Its new announcement couldn’t make it more clear: JBS will continue to fuel deforestation in the Amazon and beyond for at least another 14 years, and fuel the climate crisis well after that."
2021-04-06 | Greenpeace
blog
external news
our news

Big Meat: facing up to the demands for sustainability

The Chain: JBS backtracks on transparency as reputation risks grow

Revealed: How the global beef trade is destroying the Amazon

The swashbuckling meat tycoons who nearly brought down a government

Operation Car Wash: Is this the biggest corruption scandal in history?

How JBS is still slaughtering the Amazon

A Path Towards Zero Deforestation Cattle