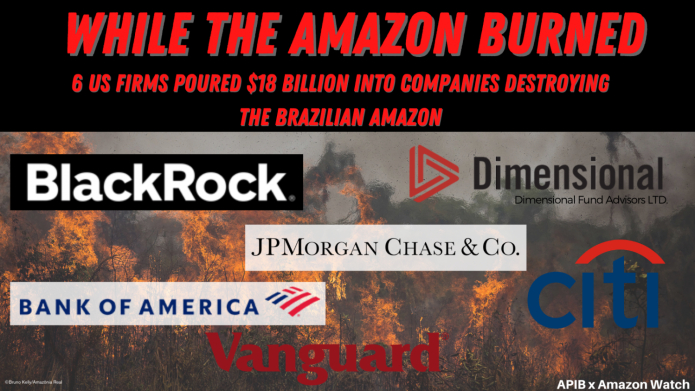 U.S.-based financial institutions play a key role in enabling the destructive actions of companies linked to violations of Indigenous rights and conflicts in Indigenous territories in the Brazilian Amazon, according to a new report published today by the Association of Brazil’s Indigenous Peoples (APIB) and Amazon Watch.

The following nine companies in those three sectors are profiled in the report: mining companies Vale, Anglo American, and Belo Sun; agribusiness companies Cargill, JBS, and Cosan/Raízen; and energy companies Energisa Mato Grosso, Equatorial Energia Maranhão, and Eletronorte, spanning the states of Pará, Maranhão, Mato Grosso, Amazonas, and Roraima. The case studies outline the nine companies’ involvement in a series of abuses including land invasions, the violation of Indigenous peoples’ rights to Free, Prior, and Informed Consent (FPIC), violence against Indigenous communities, illegal deforestation, and the use of pesticides, among others.

“The flow of foreign investments to companies operating in Brazil has expanded into an intricate international network. As these projects advance, Indigenous peoples are often treated as an 'obstacle to development,' and their lands are invaded, occupied, looted, and destroyed,” said Eloy Terena, APIB's attorney and Indigenous leader. “These conflicts stem from the pressure to open new exploitative operations in Indigenous territories, leading to full-on attacks by land-grabbers and other local actors, accompanied by the systematic disrespect for the legislation that protects Indigenous lands and rights.”

According to data analyzed by APIB and Amazon Watch, the world’s largest asset manager, BlackRock, invests in nearly all of the companies identified in this report. BlackRock alone holds over USD 8.2 billion of stocks and bonds in JBS, Energisa, Belo Sun, Vale, Anglo American, Cargill, Cosan, Eletrobras, and Equatorial Energia. Despite receiving widespread accolades for taking steps to address its investments in climate-damaging industries earlier this year, BlackRock lacks any binding policies to address the impacts of its investments on the rights of Indigenous peoples or on the deforestation of tropical rainforests like the Amazon.

The second-largest asset manager in the world, Vanguard, holds shares and/or bonds in eight of those companies: Anglo American, Cargill, Cosan, Eletrobras, Energisa, Equatorial Energia, Vale, and JBS, for a total of USD 2.7 billion.

"Our findings show that major financiers such as BlackRock, Vanguard, and JPMorgan Chase are using their client’s money to enable the wanton behavior of companies linked to Indigenous rights violations and the devastation of the Amazon rainforest,” said Christian Poirier, Amazon Watch’s Program Director. “This financial complicity in destruction contradicts the climate and human rights pledges touted by some of these firms, exposes their investors to significant risk, and contributes dramatically to the world's growing biodiversity and climate crises.”

Complicity in Destruction III draws upon research by the journalistic observatory De Olho Nos Ruralistas (Ruralist Watch - DONR) and the Dutch research institution Profundo. DONR mapped the activities of Brazilian and international companies to identify abuses such as Indigenous land invasions, illegal deforestation, and other Indigenous rights violations across Brazil. Based on this initial survey, Profundo analyzed production chains, buyers, and international investors, cross-referencing data to identify the eleven companies profiled–nine of which are directly financed by the six financial institutions named in the report.

The report also provides recommendations for companies operating or with projects in Brazil, for importing companies, for financial institutions, and for governments and policymakers around the world. Recommendations from the report are available in the summary, here.

Notable Case Studies in the Report

The companies profiled in the groundbreaking new report are but a few of the many actors implicated in today’s devastation of the Brazilian Amazon. They do not operate alone, and their actions should be understood as emblematic of greater trends that increasingly imperil the rainforest.