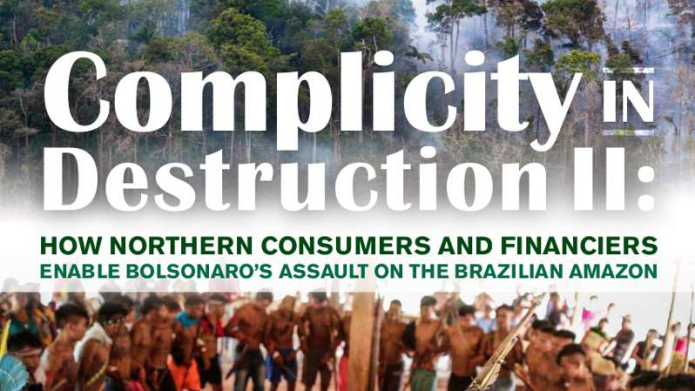 As the world's largest rainforest, the Amazon provides 20% of our oxygen, houses 10% of the planet's biodiversity, and helps stabilize the global climate. The world needs it to survive. None understand this better than the indigenous peoples and traditional communities who call it home, and are proven to be its best stewards.

Despite their importance, the Brazilian Amazon and its peoples are suffering the worst assault in a generation. Deforestation is mounting dramatically while hard-fought environmental and human rights protections, critical to the future of the rainforest, are under serious attack. Indigenous peoples and traditional communities themselves suffer disproportionate violence and repression for defending their rights and forests.

The ascension of the extreme right-wing politician Jair Bolsonaro to Brazil's presidency profoundly exacerbates the country's environmental and human rights crisis. Since taking power, his government has slashed socio- environmental standards that are fundamental to preserving the Amazon's ecological integrity and the well-being of forest peoples. Bolsonaro's severe policy rollbacks are occurring in the context of a generalized attack on the country's democratic principles and institutions.

A dominant, conservative faction of the country's powerful agroindustrial sector known as the “ruralistas” is helping drive Bolsonaro's Amazon agenda. Working from within Bolsonaro's government, industry representatives are stripping protections for forests and land rights in order to gain unfettered access to areas currently safeguarded from industrial activity. Their success would spell disaster for Brazil's Amazonian forests and the indigenous and traditional peoples who call them home, while jeopardizing the global climate.

The political and economic power that sustains these retrograde actors is provided in large part by global market actors: commodity traders, financiers and consumers. European and North American businesses that finance and source from Brazilian businesses connected with today's rollbacks therefore enable Brazil's socio-environmental landscape to be reshaped to our collective detriment.

The crises facing the Amazon require innovative solutions that address the root of the problem. By identifying the worst actors operating in the Brazilian Amazon and the global companies and financial institutions that enable them, we can build new forms of leverage over these actors and press for reform and accountability on the part of the Bolsonaro regime.

To challenge adversaries in the federal government and private sector, Brazil's National Indigenous Mobilization (MNI) has called for a global boycott of Brazilian commodities associated with human rights abuses and environmental destruction. The MNI requests solidarity from international community to support these efforts, which aim to leverage global markets in order to moderate the behavior of the agroindustrial sector, as a means to halt Bolsonaro's assault, ultimately protecting and restoring environmental safeguards and human rights.

Global solidarity with Brazil's movement for social and environmental justice is more critical now than ever. While we acknowledge the North's oversize role in environmental mismanagement, human rights abuses, and climate change, we believe that through informed choices, the European and North American private sector and engaged citizens in the region can considerably influence the destructive agenda of the Bolsonaro government.

This news story was reposted from the original at AmazonWatch.org