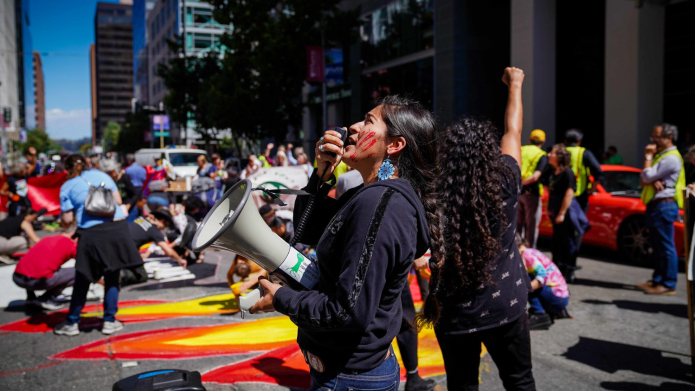 A PHP Error was encountered

Message: Trying to get property 'www' of non-object

Marfrig, established in 2000, is among the three major meatpackers in Brazil, along with JBS and Minerva. The company was the second-largest exporter of beef from Brazil in 2017. It is headquartered in São Paulo and has an operational base in 11 countries. Marfrig exports to over a hundred countries and is the second-largest beef producer in the world. It has a global slaughtering capacity of approximately 31.2 thousand heads/day.

Marfrig's major sourcing regions are linked to high deforestation risks and CO2 emissions from cattle deforestation in the Brazilian Amazon and the Cerrado biome. Although the company admitted that 53% of its cattle in the Amazon are sourced from indirect suppliers, Marfrig still does not have a system for monitoring secondary and tertiary suppliers, and so does not exclude suppliers that continue to clear forests, and that are responsible for illegal cattle ranching in reserves and Indigenous territories.

Banks should not renew or take on new financing agreements with Marfrig until and unless it fully eliminates deforestation and land rights abuses from its entire supply chain, as the company is highly implicated in deforestation in the Amazon and Cerrado.

Animal agriculture is connected to a myriad of social and environmental impacts, including uncertain land rights, violence, corruption as well as high greenhouse gas emissions, water consumption, and deforestation. In 2019 there were over 160 cases of land invasion, illegal exploitation of natural resources, and damage to property in 153 indigenous territories. Livestock grazing provoked 80 percent of these invasions.

Land grabbing and Indigenous’ rights violations: An investigation by Global Witness found that Marfrig has sourced cattle from ranchers involved in various human and Indigenous rights abuses, including a violent land dispute in Apyterewa, one of the Amazon’s most biodiverse Indigenous areas. Apyterewa, more than five times the size of Mexico City, is home to the Parákanã indigenous peoples. According to an investigation by Global Witness, in 2013 the Brazilian government’s Indigenous institute (FUNAI) accused rancher Orcimar Arantes to Prado, and other ranchers, of land grabbing in Apyterewa and of plotting to bomb an area inside the territory. Another ranch illegally located inside the Parakana’s land was an indirect supplier linked to the Marfrig’s supply chain. A rancher by the name of Antonio Borges Belfort, illegally reared cattle in Apyterewa between 2016 and 2019 in his ranch Fazenda Sol Nascente, containing over 45 hectares of illegal deforestation, sending the cows to a legal farm he owned, Fazenda Serra de Pedra, from which the beef giant then bought 274 cattle between 2018 and 2019.

In 2020, Marfrig was connected to an illegal scheme of cattle production that originated from illegal ranches located within Indigenous Peoples’ territories in the Amazon. The company’s failure to track the violations within its supply chain has resulted in the buying of cattle from ranchers accused of land-grabbing and human rights abuses against Indigenous Peoples and land rights activists.

Deforestation: Amazon deforestation is known to be achieving the point of no return, while almost half of the Cerrado’s native vegetation has already been destroyed. Two agricultural activities, cattle ranching and soy production, are the leading drivers of deforestation in Brazil. Ranching alone leads to approximately 80% of Amazon deforestation, with 80% of Amazon forests cleared since 2014 being occupied by cattle. It is estimated 70% of cleared lands in the Brazilian Amazon are now populated by cattle, leading Brazil to have the second largest herd in the world.

According to a study published by the National Academy of Sciences, between 2015-2017, Marfrig cattle purchases were linked to roughly 26,000 hectares of deforestation risk. Another study found that Marfrig, JBS and Minerva are directly linked to more than 17,000 hectares of illegal deforestation just in the Amazon state of Para. According to an investigation by Global Witness, between 2017 and 2019, Marfrig bought cattle from a total of 89 ranches responsible for over 3,300 hectares of illegal deforestation. Marfrig has publicly acknowledged that it bought cattle from farmers located at the epicentre of the deliberate burning of Amazon forests in 2019.

Marfrig has not signed the Term of Conduct Adjustment (TAC) in the state of Pará, meaning that it does not deliver audits to the Federal Ministry in Brazil. Instead the company has used a voluntary self-declaratory mechanism for its suppliers called a Request Form of Information (RFI) since 2013. 53% of its cattle in the Amazon are sourced from indirect suppliers, but Marfrig still does not have a system for monitoring secondary and tertiary suppliers, and so does not exclude suppliers that continue to clear forests, and that are responsible for illegal cattle ranching in reserves and Indigenous territories, despite committing to do this over a decade ago. The company says that it has no systematic verification of indirect suppliers amid “the lack of a nationally implemented public traceability policy [which] makes it difficult to implement such a verification.” Marfrig has now made the very same promise with a distant deadline for achieving 100% traceability and zero deforestation in its supply chain by 2030, but it remains to be seen how they plan to do this.

Loss of biodivserity: Industrial agriculture and deforestation have dramatically reduced the habitat of tens of thousands of plant and animal species, damaging not just the rainforest's ability to act as a climate stabilizer but its role as the world's greatest reservoir of biodiversity. Among these species are the rarely sighted spotted tiger cat and the tapir. Both are on the International Union for Conservation of Nature’s red list of threatened species.

Corruption: A considerable number of sources report on Marfrig’s involvement in corrupt practices. The company was accused of committing fraud from 2006 to 2012 when, in partnership with a local politician, it allegedly paid bribes to obtain the necessary licenses for its operations. In 2018, Marfrig was ordered to pay 8 million reais for administrative misconduct in Mato Grosso. Also, according to various media reports, the founder and chairmain of the board of Marfrig made a payment agreement of 100 million reais (roughly USD 20 million) as a result of the Cui Bono operation - an investigation carried out by the Federal Public Ministry and the Federeal Police related to amounts paid as bribes by Marfrig to recieve loans from the public financial instituion Caixa Economica Federal. In the same year, the found and chairman was accused of insider trading by the Brazilian Securities Commission.

In 2017, it came to light that executives of Marfrig (as well as JBS) were embroiled in the sprawling Car Was affair, one of the biggest corruption scandals of all time. Illegal payments of more than $5bn to company executives and political parties exposed a vast and extraordinarily intricate web of corruption in Brazilian politics. It was found that doleiros (black market money dealers) were laundering money on behalf of executives at Petrobras, channelling millions of dollars into secret slush funds. Petrobras directors then used those funds to funnel money to the politicians who had appointed them in the first place, and to the political parties they represented. The main objective of the racket – which fleeced taxpayers and shareholders out of billions of dollars – was to fund election campaigns to keep the governing coalition in power. Everyone connected to the deals received a bribe, in cash, or sometimes in the form of luxury cars, expensive art works, Rolex watches, $3,000 bottles of wine, yachts and helicopters. Huge sums were deposited in Swiss bank accounts, or laundered via overseas property deals or smaller companies. The means of transfer were deliberately complicated, in order to hide the money’s origins, or low-tech, to keep it off the books.

Policy on deforestation in the Amazon and the Cerrado regions

Social and Environmental Risks and Opportunities

IDB Invest, the private arm of the Inter-American Development Bank (IDB) Group, is no longer considering a $43 million loan package for Marfrig Global Foods’ Brazilian beef operations. The IDB Invest loan, which would have leveraged an additional $157 million from other sources, was originally scheduled for a board vote on December 8, 2021, which was then delayed to May 4, 2022. According to IDB Invest, the loan “has been interrupted“ and “is no longer considered for approval.” In October 2021, a public letter signed by more than 200 groups, including BankTrack, (now more than 275 signatories) was sent to the Bank’s board of directors, citing potential bank policy violations and denouncing the loan for the role it could play in fueling deforestation and land grabbing, given the problems inherently related to the investment sector and the company’s history of social and environmental rights violations. Since then, dozens of groups have reached out to the bank’s executive directors urging opposition to the loan. The Divest Factory Farming Campaign, the driving force behind this opposition, also launched a public social media campaign against the loan in November using hashtag #DivestFactoryFarming.

See below for more details.

Santander, alongside BNP Paribas and ING Bank were also lead arrangers for Marfrig’s ‘sustainable transition bond’ – announced at the height of the media coverage of the 2019 Amazon fires. This bond however is voluntary, relying on the goodwill of direct suppliers to report back and do not specify what Marfrig will do with that information to ensure its indirect suppliers with deforestation are blocked. Hence, PGGM - a Dutch investment group - stated that Marfrig’s so-called sustainable bonds could “not qualify as a sustainability bond” because it wasn’t “financing new sustainable activities or investing in a climate solution.”

Analysis: Do the meat industry’s promises on deforestation add up?

The world’s biggest meat suppliers, JBS, Marfrig and Minerva have committed to cleaning up their supply chains by 2030. But a guest analysis from Repórter Brasil shows a lack of transparency and systems that are vulnerable to fraud.
2022-07-04 | Unearthed
blog
external news
our news

How Big Beef is fueling the Amazon's destruction

Beef, Banks and the Brazilian Amazon