Merel van der Mark, Coordinator of the Forests and Finance coalition at merel@ran.org 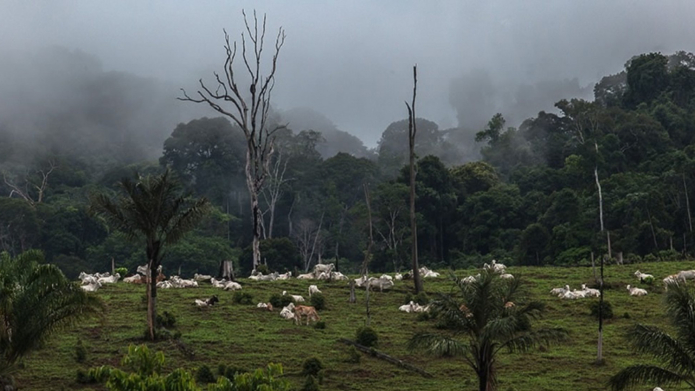 As COP26 continues in Glasgow, Scotland, with Climate Finance Day,  a coalition of civil society groups including the Forests and Finance Coalition, BankTrack, Greenpeace International, and other organisations sent a letter to 66 banks and other financial institutions urging them to no longer do business with the world’s largest meat company JBS, and to divest from the USD 1 billion “sustainability-linked bond” issued by the company in June. According to the organizations, the bond provides a questionable sustainability cover for a business model that will see JBS expand its climate-intensive activities and human rights abuses over the next decade.

Underwriters of the sustainability-linked bond include the banks Banco Bradesco, Barclays, BTG Pactual, Mizuho Financial Group, and Banco Santander. Among the holders of JBS’s Sustainability Linked Bond are US based investors such as BlackRock and State Street and Canadian based investors Manulife and Toronto-Dominion Bank.

Due in 2032, the debt is tied to JBS reducing its scope 1 and 2 greenhouse gas emission intensity by 30%, compared to a baseline of 2019. It neglects, however, the fact that scope 3 emissions — not covered by the bond — represent more than 90% of JBS’s emissions. Scope 3 emissions are the emissions from JBS’ supply chain. This includes the CO2 emissions associated with deforestation and land fires that occur on ranches that raise cattle, as well as the methane emissions associated with livestock raising.

Recent research by the UNEP and the IPCC have shown that in addition to cutting carbon dioxide emissions, drastically reducing methane emissions is the best way to rapidly avert the climate crisis and limit global warming to 1.5°C, and that it is urgent to prevent the meat industry’s great damage to the global climate, including the 32% of global methane emissions it generates. Global meat giant JBS, as the world’s largest animal protein company and the second-largest food company in the world by annual sales, is a significant contributor to climate change —  therefore banks and investors that wish to align their portfolios with the goals of the Paris Agreement should stay away from this bad business.

According to Marília Monteiro, Forests and Biodiversity Campaigner at BankTrack, "Methane is at the core of JBS’ business, and claiming a sustainability label for this bond is merely greenwashing — something that the company has been doing for decades. Banks serious about their climate ambitions should not go along with this sort of blatant greenwash and stay clear of this bond. ”

Anna Jones, Senior Forest Campaigner at Greenpeace UK, said "The very same financial institutions that are parading their zero deforestation commitments at COP26 are bankrolling JBS, an industrial meat giant whose business has helped push the Amazon to the brink of collapse. The Amazon does not have time for more empty pledges. We can't keep funding destruction and pretending we are saving the planet. Finance to industrial meat, like fossil fuels, must end now."

Merel van der Mark, coordinator of the Forests & Finance Coalition, said “Banco Santander,  a founding member of the Net Zero Banking Alliance, says it’s committed to fight deforestation, especially in the Amazon, but it seems more committed to its profits. Issuing a sustainability linked bond for the company that is arguably one of largest deforesters of the Amazon, is in clear conflict with a commitment to fight deforestation.”