Home › News
Banks and financiers back beef giant JBS to the tune of almost $1bn despite links to widespread deforestation, land grabbing and slave labour in the Amazon
By: Global Witness
2022-06-23
Brazil
Contact: 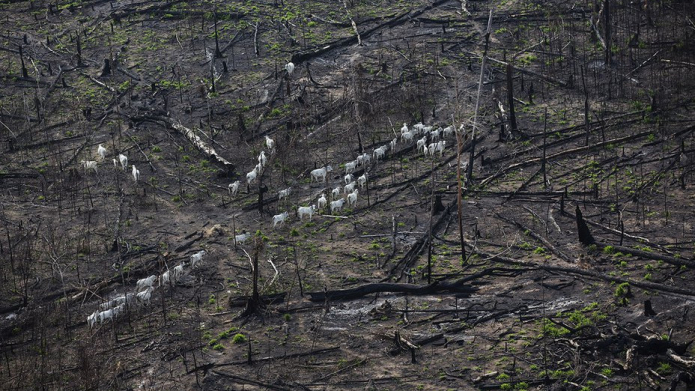 The Brazilian Amazon has been devastated by demand for cattle.. Photo: Lalo de Almeida/Folhapress/Panos

Giant meat trader JBS is still sourcing cattle from ranchers responsible for widespread illegal rainforest destruction and human rights abuses in the Brazilian Amazon, Global Witness reveals today. Our investigation shows that JBS’s tainted leather from its problematic Pará operations ended up in the warehouses of well-known Italian leather company Gruppo Mastrotto, which supplies to major global car manufacturers and furniture-makers. UK supermarkets also continue sourcing corned beef from JBS even as they previously pledged to drop some of its products, while major international banks repeatedly finance the beef giant despite its manifold failures on removing deforestation and human rights abuses from its supply chains.

The report, Cash Cow, exposes a recurring pattern of land grabbing, slave labour and cattle laundering carried out on the ranches of one of JBS’s suppliers in the Amazon state of Pará, the Seronni family (1). The investigation also found JBS bought cattle from 144 ranches containing 10,000 football fields of illegal deforestation in 2020 in this state alone, contrary to its no-deforestation agreements with Brazilian prosecutors. JBS failed to monitor another 470 ranches of ‘indirect suppliers’ further up its supply chains for compliance with its prosecutor’s agreement, where Global Witness found an estimated 40,000 football pitches of illegal Amazon clearance, and a total of 1,600 ranches containing 57,000 football pitches of deforestation, legal or otherwise (2).

Top-end Italian manufacturer Gruppo Mastrotto sourced leather from JBS’s tannery in the Amazon state of Pará linked to this illegal deforestation, slave labour, land grabbing, and cattle laundering, Global Witness reveals (3). The Italian company sells leather to car manufacturers such as Volkswagen Group and Toyota and furniture producer Ikea (4). At the same time, in February 2022 UK supermarkets like Sainsbury’s, Asda and Iceland offered beef products linked to JBS, despite some previously committing to not source from the company or from Brazil. Morrisons dropped a product containing JBS beef from its stores after Global Witness took our findings to the supermarket (5).

Meanwhile, huge banks and investors like HSBC, Barclays, Deutsche Bank, JP Morgan, Santander, and BlackRock continue backing JBS. Their financing flows to the company despite JBS’s repeated failures to remove environmental and human rights abuses from its supply chain, contrary to many of these financiers’ no-deforestation policies and climate commitments. Our report reveals that as of October 2021, investment companies controlled by HSBC, Barclays, Santander, Deutsche Bank, BlackRock, JP Morgan, and other EU and US-based financial institutions still held combined shares worth almost US$1 billion in JBS (6).

The customers of some of Europe’s biggest and most prestigious banks and companies could therefore be exposed to deforestation and serious human rights abuses in JBS’s supply chains.

These findings come against the backdrop of the rapidly accelerating destruction of the Brazilian Amazon, as deforestation reaches record levels (7). The dismantling of environmental policies and the weakening of environmental agencies under President Bolsonaro have been highlighted as key risks that may push the Amazon to an irreversible tipping point, with devastating consequences for indigenous peoples and local communities, the global climate and biodiversity (8).

As the Brazilian elections approach and crucial legislation on land grabbing is passing through congress, Amazon deforestation and indigenous rights have become a central issue in Brazil. A recent survey suggested almost 90% of Brazilians believe that it is necessary to conserve the Amazon forest because it is Brazil's greatest wealth (9).

This investigation follows Global Witness’s previous exposé on JBS’s links to deforestation and human rights abuses in the 2020 report, Beef, Banks and the Brazilian Amazon. Today’s revelations of subsequent forest destruction and abuses shows that this is an ongoing and repeated pattern of behaviour by JBS and that it has not taken sufficient action to address the well-catalogued problems in its supply chains. JBS has also recently come under fire for an alleged 50% increase in its carbon emissions over the last five years, giving the company a carbon footprint larger than all of Italy and almost as large as that of the UK (10). Meanwhile, 2021 saw record revenues for the company, as it continues to fuel the climate crisis and profit from destruction (11).

Six months on from the Glasgow Leaders’ Declaration on Forests and Land Use at COP26 and with key deforestation legislation being introduced and considered in the UK and EU respectively, our investigation is an urgent reminder of the importance of robust deforestation regulation that covers all forest-risk commodities including beef and leather, puts human rights protections front and centre and addresses the finance sector’s role in funding destructive agribusinesses like JBS (12) (13).

“The Amazon is the world’s largest remaining climate-critical rainforest, but it is being razed at alarming rates, enabled by forest-wrecking agribusinesses like JBS and propped up by the firms and banks that do business with them. While they make blockbuster profits, local communities suffer and the lungs of the planet continue to be decimated.

“Tainted beef and leather could be ending up on the dinner plates and in the products of UK and EU consumers, exposing them to forest destruction, slave labour and other abuses.

“If governments want to practice what they preached on deforestation at COP26, they need to follow up the commitments made at the conference with strong laws that make it illegal for all businesses, including financiers, to fuel deforestation and associated human rights abuses linked to the beef and leather trade.

“In the UK, we understand the government might exclude beef and leather from the initial phase of implementation of the Environment Act, despite these being the biggest source of the UK’s overseas deforestation footprint. This report is a reminder of what a devasting decision that would be.”

“Banks that finance cattle ranching in the Amazon rainforest, or companies that buy meat directly from ranchers from this region, need to be careful and demand that the production is not linked to deforestation.”