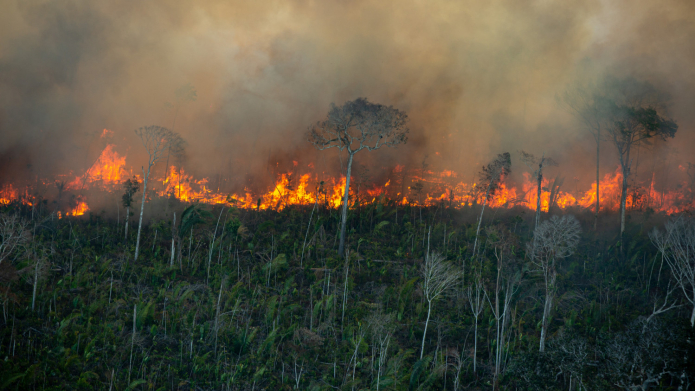 The world’s largest meat company, JBS, has increased its greenhouse gas emissions by a staggering 51% over the last five years and is now responsible for greater emissions than Italy’s annual climate footprint, new research finds.

A coalition of campaign groups – including the Institute for Agriculture and Trade Policy (IATP), Feedback and Mighty Earth – have expressed outrage at JBS’s supersized climate emissions, which place it at odds with its own corporate emissions reduction strategy just one year on from its ‘Net-Zero by 2040’ pledge.

Ahead of the company’s annual general meeting (AGM) in São Paulo tomorrow, the coalition is urging JBS’s investors and customers to drop the Brazil-based company. JBS’s top investors include Brazilian development bank BNDES, asset manager BlackRock, and Barclays and Santander banks. Its major customers in the retail sector include supermarket giants Carrefour, Costco, Tesco, Walmart and Ahold Delhaize. In the fast-food sector, its customers include McDonald’s, Burger King and KFC.

Using an UN-approved methodology, new research contained in a media brief by IATP, Feedback and investigative website DeSmog, found that JBS – which processed 26.8 million cattle, 46.7 million pigs and 4.9 billion chickens last year – increased its annual GHG emissions by 51% in five years from 280 million metric tonnes (mmts) in 2016 to around 421.6 mmts in 2021. This is more than the annual climate footprint of Italy or Spain and close to that of France (at 443 mmt) and the UK (at 453 mmt). It is approximately equivalent to fossil fuel giant Total’s 2020 emissions.

The latest UN Intergovernmental Panel on Climate Change (IPCC) assessment report has singled out livestock-related methane emissions, recommending they be slashed by a third by 2030 in order to hold global temperature rise to 1.5ºC. Instead, JBS’s emissions are set to jump even higher as it pursues aggressive expansion plans and seeks access to increased financing through a possible listing on an American stock exchange.

“It’s mind-blowing that JBS can continue to make climate claims to investors, even as the company massively increases its emissions,” said Shefali Sharma, Europe director of the Institute for Agriculture and Trade Policy, which estimated in 2018 that JBS’s emissions were roughly half that of oil majors such as BP, Shell or ExxonMobil. “Our updated emissions estimates show clearly the harm being done by empty net-zero announcements. Investors gathering at today’s AGM shouldn’t be fooled by this greenwash. We need public, independent and accountable systems for monitoring these companies’ emissions. Governments need to step up and regulate these companies and support a transition out of this destructive model of industrial livestock production.”

With operations in 20 countries ranging from Brazil to the US and record annual revenues of US$76 billion, JBS last year promised to achieve net-zero emissions by 2040. However, its net-zero plans provide little detail and have been panned by campaigners for omitting so-called ‘Scope 3’ emissions – which represent up to 97% of JBS’s contribution to climate change. Scope 3 emissions encompass pollution from its entire supply chain: potent greenhouse gases such as methane emitted from livestock, as well as emissions from deforestation, forest fires, and land conversion, plus the production of animal feed, enteric fermentation, and the use of agrochemicals.

Carina Millstone, Executive Director of campaign group Feedback, said: “It’s high time that banks and investors, many of whom have adopted their own ‘net-zero’ targets and committed to end deforestation, ceased to bankroll climate chaos and the destruction of nature, by pulling the plug on their financial backing to toxic JBS and its subsidiaries.”

Hazel Healy, UK Editor of climate investigative news outlet DeSmog, said: “JBS is using the same greenwashing tactics we’ve seen employed by oil and gas majors for decades. It presents itself as a company with genuine climate ambition but fails to disclose its full emissions so they can be compared with the company’s public communications. And as this research shows, JBS’s emissions are increasing substantially, not decreasing.”

Launched alongside IATP’s JBS emissions revelations, a new report about the company by Mighty Earth – called The Boys From Brazil – highlights how JBS used corruption and massive government subsidies to finance the enormous international growth that put it into the climate super-polluter category in which it finds itself today.

The report highlights that JBS was responsible for an estimated 1.5 million hectares of deforestation in its indirect supply chains in Brazil since 2008 and warns that scandal-hit JBS has repeatedly broken its promises to stamp out deforestation in the Amazon or conserve other key ecosystems such as the Cerrado and the Pantanal. It also chronicles a long history of links to elite bribery, price-fixing, invasion of Indigenous lands, worker exploitation, modern-day slavery, and environmental pollution.

“JBS is one of the world’s worst climate offenders and that’s why we’re urging its key customers like giant supermarkets Carrefour, Costco and Tesco to drop JBS urgently,” said Alex Wijeratna, Campaign Director at Mighty Earth. “No company that buys meat from JBS can claim to be serious about climate change. JBS could easily implement systems that would end its links to deforestation and radically reduce its methane pollution. The fact that a single meat company can cause more pollution than an entire G7 member country should be a wake-up call that we need a massive scale-up of plant-based and cultivated protein, and we need it now.”

The full DeSmog, IATP and Feedback joint media briefing on JBS’s emissions and climate greenwash can be found here.

Mighty Earth’s new report on JBS titled The Boys From Brazil can be found here.