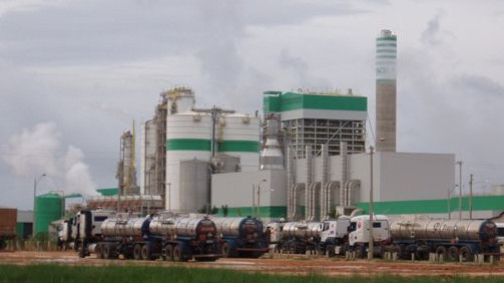 Suzano, based in São Paulo Brazil, is the world’s largest pulp producer, since it merged with Fibria in January 2019. It has a production capacity of 11 million tonnes of pulp per year. The company develops fibre plantations and it owns pulp mills, paper mills and energy plants, all located in Brazil. It also owns the biotechnology company Futura Gene, which apart from Brazil, has operations in Israel, the USA and China. As of early 2019, Suzano had a landbank of 2.3 million hectares, of which 1.3 million hectares contained plantations, and it owned 8,5 pulp mills.

Suzano is the world's largest pulp producer. It has 1.3 million hectares of eucalyptus plantations which inevitably cause impacts such as the reduction of water availability, the increase in fire risks, the exhaustion of soils, the pollution of land and water by pesticides, the reduction of biodiversity and, indirectly, deforestation. The company is also involved in a history of land conflicts with traditional communities and it leads Brazil's research on transgenic eucalyptus trees. Financiers of Suzano should require the company to implement the highest social, environmental and governance standards.

Landconflicts Suzano has a landbank of 2.3 million hectares, of which 1.3 million are tree plantations. The acquisition of this large landbank has led to several conflicts over land, mostly with indigenous, quilombola and (landless) rural workers communities. Some of the strongest land conflicts occur in the states of Espírito Santo and Bahia, where 3 of the company’s mills are located. Another region of strong conflict is in the border region between Maranhão and Piauí, where Suzano has so far failed to implement a mill, but the expansion of the eucalyptus continues.

Conflicts around the Aracruz mill date back to 1967, when it displaced thousands of indigenous, quilombola and fisheries communities to establish large eucalyptus plantations. Today, only a fraction of the quilombola families still remain in their traditional territories, struggling to survive surrounded by the eucalyptus. Deprived of means of income, they are heavily criminalized for using the eucalyptus trees to produce charcoal. Trees they say are planted on their lands. Apart from the land conflicts, the quilombolas (afro-descendant communities) also suffer from lack of water and intoxication by pesticides. According to FASE, in the North of Espírito Santo, over 130 streams have dried up since the eucalyptus plantations were introduced in the region. And the quilombolas say that the excessive use of pesticides has already killed several people, and has increased the cases of cancer and of blindness. There are also at least 6 eucalyptus farms that have been occupied by the MST, which claims that these were actually established on public lands.

After years of land conflicts and occupations around the Veracel mill, which is a joint venture between Stora Enso and Fibria, the company made an agreement with 6 social movements and government bodies which involved the sale of 16,500ha to the government for the purpose of agrarian reform, and the creation of sustainable settlements. On the other hand, the movements committed to no more land occupations. But after the accord was signed new conflicts have arisen, both between the movements that signed the agreement, and that accuse Veracel of applying divide and rule tactics, but also due to the appearance of new social movements, which by 2015 had occupied another 5,700ha of land claimed by Veracel.

In the Region of the Baixo Parnaíba, in Maranhão, Suzano and its subsidiary Paineiras are involved in several land conflicts. The company and related third parties are accused of evicting peasant families with customary rights from their land. One estimate holds that around 70% of Suzano’s plantations in the region result from landgrabs. There are also land conflicts in the region of Palmeirais, in Piauí, where third parties are accused of terrorizing local communities with the aim of obtaining their land to plant eucalyptus, to be sold to Suzano. In both cases, a run for land to plant eucalyptus was caused by Suzano’s announcement that it would build a pellets mill in the first and a pulp mill in the second region. However, the trees have since matured but the mills were not built.

Lack of Free, Prior and Informed Consent for the Imperatriz mill The Environmental Impact Assessment for the mill in Imperatriz failed to identify three indigenous territories downstream from the mill, located directly on the Tocantins river, as affected communities, and thus they were not included in a process of obtaining Free, Prior and Informed consent. They will be directly impacted as they live on the river into the mill will discharge its effluents.

Fibre sourcing The establishment of large monocultures is very detrimental to biodiversity and the conservation of valuable biomes. Though Suzano’s involvement in direct deforestation for the establishment of plantations is limited, apart from the Baixo Parnaíba and Piauí regions, the plantations do indirectly contribute to land use change and deforestation in other areas for competitive uses. Suzano claims it has a vast area of preserved forests, far more than the legally required. However, the company does not provide georeferenced maps of the areas it owns, leases or sources from. And though around 70% of its landbank is FSC certified, FSC also does not disclose georeferenced maps of the plantations it certifies. This makes social control on compliance with both the law and the certification criteria impossible.

Genetically Engineered Trees In 2015 Suzano obtained permission from Brazil’s Biosafety Commission to commercialize a transgenic variety of eucalyptus trees. The variety H421 has been engineered to grow faster. Despite the authorization, Suzano claims it is not yet using the genetically engineered eucalyptus trees on a commercial scale. Doing so could mean it would lose its FSC certificate, as this is forbidden by the Certification Scheme’s Principles and Criteria. Suzano does not provide information about the location of its experimental plots of transgenic trees.

Impacts on water quality and availability Fast growing pulpwood plantations use vast amounts of water and often impact the availability of water for other uses, such as subsistence farming, agriculture or even drinking water. Though the industry stresses the fact that the Eucalyptus tree uses water efficiently and that its water use is similar to that of other plants (282 g water/g dry biomass according to one study), when compared to the use per biomass created, the problem with these trees is that they grow very fast, and thus when converted to water use per hectares, per year, it uses actually much more water than slow growing native vegetation.

The state of Espírito Santo is rapidly heading toward desertification. In just a few decades, the region has gone from being one of the last refuges for the seriously threatened Atlantic Forest, to having 36 percent of its territory officially considered susceptible to desertification, according to Brazil’s Ministry of Environment.

Long term research in South Africa has shown that the fast growing and exotic Eucalyptus trees require, on average, 30 liters of water per day. When planted at a density of 400 trees/hectare, this means 12,000 l/ha/day. This may cause water levels in nearby streams and wells, as well as the groundwater levels, to drop.

Apart from the direct use of water by the trees themselves, there is also the impact from water being taken from rivers for irrigation purposes, the reduced uptake of water by soils due to erosion and the destruction of rivers and streams when the land is being prepared for plantations. Complaints of water scarcity by communities that live nearby plantations are numerous, whether in the Baixo Parnaíba, in Espírito Santo or in Três Lagoas.

On top of the high water usage of the pulp industry, it also pollutes water ways, both due to the excessive use of agrochemicals and due to the discharge of polluted effluent in waterways. The effluent of Suzano’s pulp mills contains among other things carcinogenic dioxins, as it uses chlorine in the bleaching process.

Green Bonds In 2016, Suzano emitted USD 500 mln worth of green bonds on the international market and another R$ 1 bln worth on the national market. In addition, it emitted another USD 200 mln worth of Green Bonds in 2017. The proceeds of these bonds were mostly applied in plantation management. The assumption of these bonds is that the plantations have a positive impact as the work as CO2 sinks and thus contribute to mitigate climate change. However, most of these plantations will be transformed in short lived consumer products, which will release large part of their CO2 content back into the atmosphere after they have been disposed of. This undoes the initial positive effect of the plantations as carbon sinks. Apart from a possible contribution to mitigate climate change, plantations are not very “green”. Monoculture plantations have a very low biodiversity, occupy vast areas of land, use large amounts of water and create very few jobs.

More than 50 organizations, networks and movements from Brazil and around the world denounce the release into the environment and the commercial use of a new transgenic eucalyptus from the Brazilian company Suzano Papel e Celulose!

The approval by the National Technical Commission on Biosafety (CTNBio) of the GE eucalyptus resistant to glyphosate, identified as 751K032, is a serious threat to life, to society and to nature. It was approved without any democratic consultation with Brazilian civil society in general and the neighboring communities of the areas where the plantations will be located in particular. The only concern was granting the license in the benefit of the commercial interests of Suzano Papel e Celulose, instead of the detrimental effect on life.

Organizations denounce the CTNBio decision from November 16, 2021 to approve the release into the environment, commercial use and any other related activities of the new GE eucalyptus developed by FuturaGene, owned by Suzano Papel e Celulose.

The letter ends by demanding the immediate revocation of the license granted for the use of Suzano GE eucalyptus 751KO32, as well as the action and intervention of the Federal Public Prosecution Service to revoke the decision made by the CTNBio, a decision made without a full public debate, especially in regions of Brazil that have been exposed for many years to eucalyptus monoculture.

Read the complete letter in English, Spanish and Portuguese.

In January 2018 rumours surfaced that APP’s Paper Excellence was interested in buying Fibria. A month later Fibria communicated that Suzano had also shown interest in merging with the company. In March, after a short bidding race, the controlling shareholders of Fibria accepted a USD11 billion bid by Suzano, in a deal to create the world’s biggest pulp producer. In November Brazil’s anti-trust authority, CADE, approved the deal.

The hidden land conflicts of Suzano

Brazil approves commercial use of the first GM eucalyptus tree

Decree that withdraws the license for Suzano's expansion

Eucalyptus and Water Use in South Africa

Suzano, by the WRM

Blog about conflicts in the rural areas of the Baixo Parnaíba region, in the northeast of the state of Maranhão.