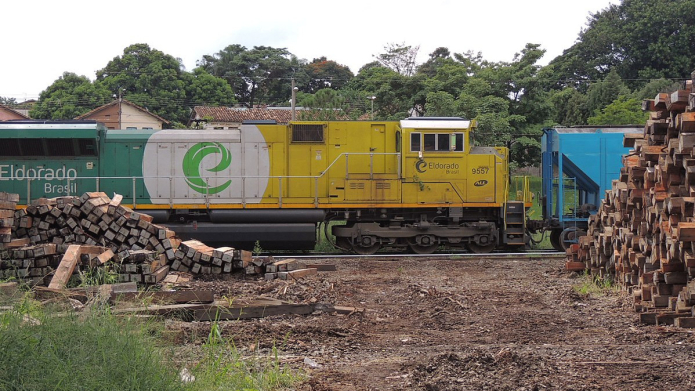 Eldorado Brasil was founded in 2010 by J&F Investmentos, the holding company that also controls the world's largest meatpacker, JBS. Eldorado Brasil was established to build a pulp mill in Três Lagoas, which started its operations in 2012. In 2015, Eldorado Brasil launched the plan for a second mill - Vanguard II. This was delayed due to legal conflicts over the company's ownership. In 2017, the owners of J&F Investmentos signed a contract with Paper Excellence (PE) to sell Eldorado Brasil in order to raise money to pay the fines that they agreed to pay as part of the plea bargain J&F Investmentos signed with the Federal Public Prosecutor's office concerning corruption allegations. But in 2018 J&F Investiments canceled the deal, alleging that Paper Excellence had not complied with the contract. The issue is being settled in an arbitration court.

The company owns an industrial complex in Três Lagoas, which includes a pulp mill, chemical plants, a biomass based power plant and a land bank of more than 350,000 hectares, in Mato Grosso do Sul, of which 220,000 hectares are eucalyptus plantations and 106,000 hectares are protected areas. The company mainly exports its pulp, with 40% going to Asia.

Labour issues The construction of the mill attracted many migrant labourers to the region, causing impacts on the local economy. Several of them stayed in the region and found work in the plantations. However the management of plantations is not very labour intensive, and the industry generates fewer jobs than the cattle ranches which made way for the plantations. The working conditions in the field are often also precarious. In 2012, a group of 8,000 contract workers at the Três Lagoas mill went on strike for the fourth time. Their  demands included better working conditions, health insurance and more free days.

Outsourcing land ownership Eldorado Brasil rents 96% of the land on which its plantations are located, owning only 4% itself. With this model, the company exercises great control over what happens on the land, but it does not take responsibility for the long term care of it.

Aerial spraying In its 2014 Sustainable Forest Management Plan, the company states that it applies pesticides by airplane. The lack of precision of such applications can lead to the contamination of water ways and the spraying of non target areas such as community gardens and urban areas.

Fibre Sourcing The establishment of large monocultures is very detrimental to biodiversity and the conservation of valuable biomes. Eldorado Brasil has a landbank of 350,000 hectares in Mato Grosso do Sul, of which 220,000 hectares are eucalyptus plantations.

Eldorado claims it has an area of 106,000 hectares of preserved forests. However, the company does not provide geo-referenced maps of the areas it owns, leases or sources from. And though over 90% of its landbank is FSC-certified, FSC also does not disclose geo-referenced maps of the plantations it certifies. This makes social control on compliance with both the law and the certification criteria impossible.

Impacts on water availability and quality Fast growing pulpwood plantations use vast amounts of water and often impact the availability of water for other uses, such as subsistence farming, agriculture or even drinking water. Though the industry stresses that eucalyptus tree uses water efficiently and that its water use is similar to that of other plants on the basis of biomass produced (282 grams of water per gram of dry biomass according to one study), since these trees grow very fast they actually use much more water per hectare per year than slow-growing native vegetation.

Long term research in South Africa has shown that the fast growing and exotic eucalyptus trees require, on average, 30 liters of water per day. When planted at a density of 400 trees per hectare, this means 12,000 liters per hectare per day. This may cause water levels in nearby streams and wells, as well as the groundwater levels, to drop.

Apart from the direct use of water by the trees themselves, there is also the impact from water being taken from rivers for irrigation purposes, the reduced uptake of water by soils due to erosion and the destruction of rivers and streams when the land is being prepared for plantations. Complaints of water scarcity by communities that live near plantations are numerous, whether in the Baixo Parnaíba, in Espírito Santo or in Três Lagoas.

On top of the high water usage of the pulp industry, it also pollutes waterways, both due to the excessive use of agrochemicals and due to the discharge of polluted effluent in waterways. The effluent of Eldorado’s pulp mills contains, among other things, carcinogenic dioxins, as it uses chlorine in the bleaching process.

Energy production The Vanguard complex also has a power plant which produces up to 220 megawatts (MW) per hour. The plant runs on biomass, burning timber that isn't used in the pulp process. Of this amount, 95MW is used by the mill, and another 50MW by the companies that produced inputs. The rest, which is enough to supply a city with one million inhabitants, is sold to the national grid. The project for the Vanguard II mill includes another 310MW biomass energy plant, which will produce energy excess of 92MW. NGO's have warned that the large scale burning of woody biomass to generate energy is bad for the climate, for the people, for the forests and for the energy transition.

Corruption The Batista brothers, who control J&F Investments, are engulfed in corruption scandals. On 13 May 2017, J&F Investimentos SA agreed to pay BRL 10.3 billion (USD 3.16 billion) over 25 years as part of a leniency settlement over bribery allegations which are investigated under Operation Car Wash. Its the world’s biggest leniency fine ever levied, Brazilian prosecutors said.

Another investigation, Operation Greenfield, investigates a billionaire corruption scheme that was set up between 2009 and 2015, in which ex-executives of pension funds Petros and Funcef, knowingly invested millions in an over-rated Eldorado Brasil, in exchange for kickbacks, but in detriment of the pension funds.

Paper Excellence, the company that was previously in line to purchase Eldorado Brasil, is controlled by the Widjaja family, which also controls APP. This company was dissacociated from FSC in 2007 for its involvement in destructive forestry practices, and in 2001 defaulted on USD 14 billion of debt.

Eldorado Brasil was set up with large investments from Brazilian development bank, BNDES, and two pension funds, Petros and Funcef, which, until 2017, jointly owned 17% of the company, through FIP Florestal. They have sold their shares to CA Investments.

Decision by the US District Court of Minnesota