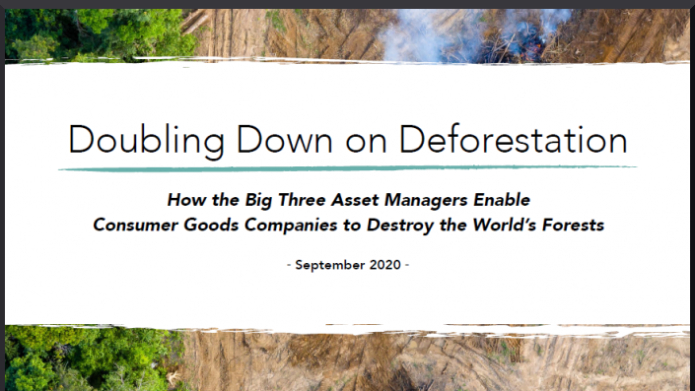 Report cover. Photo: Friends of the Earth US

As rainforests across the tropics face another year of devastating fires, a new report from Friends of the Earth shows that largest U.S. asset managers, BlackRock, State Street and Vanguard – known as the Big Three – have explicitly undermined efforts by consumer brands and agribusiness companies to halt deforestation.

The new report, Doubling Down on Deforestation, reveals that the Big Three collectively hold shares worth almost $700 billion in consumer brands with supply chain links to rainforest destruction, and tens of billions more in the agribusiness producers directly responsible for widespread deforestation. All three firms have voted against or abstained from voting on every single shareholder resolution requiring companies to act on deforestation since 2012, and lack clear policies to engage with companies on the issue, which is the second leading cause of climate change. The report urges asset owners, including city and state pension funds, to advocate for the Big Three to eliminate deforestation from their portfolios.

“Millions of Americans rely on BlackRock, State Street and Vanguard to provide a secure future, but by continuing to neglect the global deforestation crisis while bankrolling the industries responsible, these investors are actively undermining that very future,” said Jeff Conant, senior international forest program director with Friends of the Earth. “The destruction of forests is also tied to the epidemic of killings of environmental defenders, many of them Indigenous, and the world’s largest investors have stayed silent. This is not just inaction – it is willful neglect.”

New York City Comptroller Scott M. Stringer, who oversees the New York City’s $194.5 billion pension system, said, “If we don’t act now to preserve and protect our world’s forest, we will exacerbate an ongoing environmental and human rights crisis. Global deforestation rates have accelerated by 43 percent since 2014 and we need every company, from consumer retailers to financial firms, to realize we can’t stand by as forests are razed and burned.”

The Brazilian Amazon is facing the worst burning season in a decade, with over 500 major fires so far in 2020, many of them in Indigenous Peoples’ territories. In Indonesia, where deadly fires in 2019 released over 700 tons of greenhouse gases, many provinces have already declared an emergency as toxic haze from intentionally lit fires intensifies the already grave COVID-19 pandemic.

“Shareholders have tremendous power to transform our economy for the good of people and the planet,” said Josh Zinner, CEO of the Interfaith Center for Corporate Responsibility, a leading consortium of faith and values-based shareholder advocates. “Unfortunately, as this report reveals, the world’s largest asset managers have consistently used their power to undermine climate justice and human rights.”

“For years the Big Three ignored deforestation, sending a clear signal to industry that the destruction can continue,” said Mary Cerulli, co-founder of Climate Finance Action, a Boston-based group advocating for the finance sector to transition justly away from business models that drive the climate crisis.

Doubling Down on Deforestation available for download here, provides a suite of recommendations for government, industry, and finance to take meaningful action to halt deforestation.

The launch of the report was accompanied today by colorful, physically distant actions where Friends of the Earth delivered more than 125,000 petitions to the investors’ headquarters in Boston, New York, Philadelphia and San Francisco.

In 2010, the Consumer Goods Forum, a consortium of the world’s largest retail companies, committed to achieving zero-net deforestation in commodity supply chains by 2020 – but failed to meet that commitment. From 2014-2019, global tree cover loss increased by 43%, with an area of forest the size of the United Kingdom lost every year, leading to annual CO2 emissions equal to the annual emissions of the European Union. The destruction of critical wildlife habitat is also a root cause of zoonotic illnesses like COVID-19, with three-quarters of emerging infectious diseases “spilling over” into human hosts due to habitat destruction often linked to agribusiness. In this sense, the new report notes, tropical forests are not only analogous to “the lungs of the Earth,” they are also the Earth’s immune system – and the world’s largest money managers have left them dangerously vulnerable.

Asset managers can address deforestation in companies they invest in through direct engagement with companies, proxy voting, or excluding destructive companies entirely from their portfolios. Numerous investor alliances have arisen in the last decade to take steps in a collective effort to protect the value of their investments. Yet, “the Big Three” asset managers – BlackRock, Vanguard, and State Street – have been largely absent from these efforts and ineffectual in their attempts to address deforestation, the report finds.

Key Findings by the Numbers: