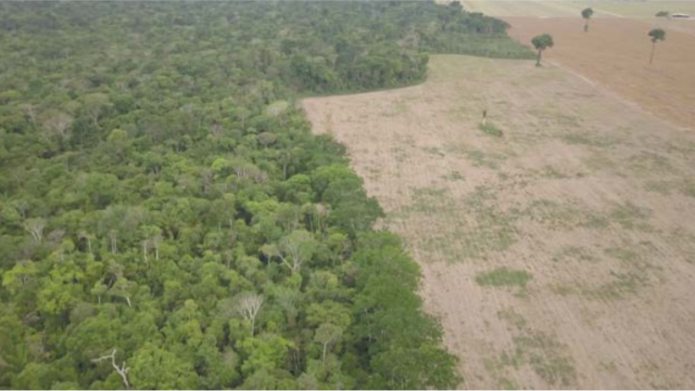 As a direct or indirect effect of road construction, deforestation has increased dramatically in the Brazilian Amazon. Photo: Thomaz Pedro. Source: "Voices from Tapajos" report, Society for Threatened Peoples.

The EF-170 Ferrogrão (“grain rail”) Railway project is a planned 933 kilometer railway line which will connect Brazil’s grain-producing state of Mato Grosso with ports in the state of Pará and allow for expansion of agribusiness in Brazil's Legal Amazon region. The railway will run through the Amazon rainforest including the Jamanxim National Park. There will be branch railway lines to Santarenzinho (32.3 km) and Itapacurá (11km) and the concession term is 69 years.

Although in March 2021, the Supreme Federal Court ordered all EF-170 processes to be suspended, the project remains a priority for the Brazilian government, which plans to put it to tender at the beginning of 2022. The railway could increase annual grain transport by 70% over a ten-year period. It will transport 58 million tons of grain annually, and also involves the construction of 54 loading and unloading terminals.

Megaproject Ferrogrão in the Amazon - Another step in a questionable process

It is estimated that 2000 square kilometres of rainforest would be cleared for the railroad and the boundaries of the Jamanxim National Park are being moved for the project. 19 Indigenous communities would be adversely impacted and have not given their Free, Prior and Informed Consent (FPIC) to the project. The railway will open up the frontiers for more deforestation, as it will facilitate the access of loggers to protected areas.

Financial institutions must engage with the companies potentially involved as project sponsors, to demand that Indigenous rights, including the right to Free, Prior and Informed Consent, are respected from the start. Financial institutions considering financing the project, or companies involved in the project, must ensure that a robust due diligence process is followed which takes into account the social, environmental and climate impacts of the project and engages with affected communities and NGOs that represent them.

The planned route of the railway passes through 19 Indigenous lands and will affect 48 protected areas. Indigenous peoples, quilombo communities and riverine communities will be directly affected by the project but they have been deprived of their right to an adequate consultation process, including their right to Free Prior and Informed Consent (FPIC). Feedback received during a public hearing on the project’s feasibility studies highlighted environmental, societal and cultural issues related to Ferrogrão, such as the need to carry out consultations with indigenous peoples, traditional communities and municipalities located along the railway route and the need to complete environmental impact studies before the project is put to tender and awarded. However, this feedback was ignored and the Brazilian Investment Partnership Programme (PPI) plans to consult relevant stakeholders only at the time of preparing the environmental licence, which clearly undermines the ‘Prior’ principle of FPIC.

In 2017, the Instituto Kabu, representing the Baúe Mekragnoti Indigenous lands, sent a letter to the Ministry of Transport asking for their right to Free, Prior and Informed Consent (FPIC) to be respected. However, the demand was denied on the basis that "the proposed route for the implementation of the railway is at a greater distance than that which could have a direct socio-environmental impact on the Indigenous land". This is in direct contradiction to the feasbility studies of the project which identified 19 Indigenous lands, as well as other traditional communities, located in the area of influence of the railway.

Indigenous peoples and traditional communities in the region rely on the forest and animals to sustain their livelihoods, but the increase of industrial agriculture, particularly soy, in the region has resulted in widespread deforestation and water sources drying up. The development of soya plantations has also destroyed sacred places and those who stand in opposition to further development are criminalised and accused of getting in the way of progress. The Ferrogrão railway represents, to these Indigenous peoples, yet another project that will cause further harm to the forest and destroy their livelihoods and sacred places.

An ex-ante evaluation of the project estimates that, for the almost 1000 kilometre-long railway, 2000 square kilometres of rainforest would have to be cleared, effectively cutting the Amazon in two parts. The same study found that the cost of the carbon emissions associated with such deforestation would correspond to roughly 60% of EF-170’s implementation cost.

Affected communities expect, based on previous experience, that a mega-infrastructure project such as this railway will lead to additional destruction in the region through factors including connecting infrastructure, additional settlements and easier access for illegal gold miners. For example, along the railway, there are 53 planned loading and uploading terminals to be built. The BR-163 Highway, alongside which the railway will be built, has already caused the highest levels of illegal settlement, logging, small-scale mining and land grabbing in the Tapajos region. The installation and operation of the railroad will stimulate an increase in grain production in the region, leading to an increase in deforestation to open new production areas; the elimination of forest remnants; an increase in the use and contamination of water resources, both surface and groundwater; intensification of fertilizer use; and an increase in land concentration.

In 2017, the federal government’s proposal to remove 852 hectares of land from the Jamanxim National Park to the Tapajos Environmental Protection Area was approved, thus allowing the railway to be constructed on the land. In practice, this is a way of legalising the land titles of illegitimate landowners and land grabbers. The Jamanxim National Park is the most conserved area in the region and is the last connection between the forests of the Singu and Tapajos basins and is important for the maintenance of biodiversity. In addition, the federal government is attempting to reduce protection for five Conservation Units along the route of the railway, which could result in the lack of protection for more than one million hectares of forests and an increase of mining exploitation in the Amazon.

In June 2020, the Brazilian government announced that it would fund infrastructure projects, such as the Ferrogrão railway, through the sale of so-called “green bonds”. It is expected that the railway will be certified as a sustainable project by the Climate Bond Initiative (CBI), as the railway offers a low-carbon transport compared to transport by trucks. It is hard to comprehend how, given the socio-environmental impacts this project would have, the project can be categorised as sustainable.

Megaproject Ferrogrão in the Amazon - Another step in a questionable process

The turmoil surrounding the Ferrogrão megaproject in Brazil continues: the Brazilian Ministry of Infrastructure has only found one interested party for the implementation of the railroad line. The reason for this is probably the high legal hurdles associated with building the line through nature reserves and indigenous territories.

So far only one company has applied to build the Ferrogrão railroad, with international companies steering clear of the project, despite an international roadshow in the fall of 2021. The Brazilian Ministry of Infrastructure (MInfra) had to settle for the national company Zion Real Estate Ltd. and officially accepted its application to implement the megaproject in January. It is questionable whether Zion is suitable for a project of this type and dimension, since it is a residential construction company that has no experience in railroad construction.  Also cause for concern is the fact that partners of Zion actively supported the campaign to elect Preside Bolsonaro and the background surrounding its application remains opaque.

As long as the decision on the project has not been made, there is still hope for the affected indigenous communities.

In October 2021, the Brazilian government sent a delegation on the "Ferrogrão Roadshow" with the mission of offering infrastructure projects in Brazil to international investors and operators. Bank of America for Latin America approved US$ 2 billion, equivalent to R$ 11 billion, in credits for investments in infrastructure in Brazil, including the Ferrogrão project. Other investors represented include JPMorgan and Goldman Sachs.

The project is still in the preparatory phase and has not been granted a concession or a license. Therefore, the construction of companies, operators and owners has not been determined, and financing has not been arranged. The estimated costs of the project are:

The Society for Threatened Peoples conducted an assessment identifying the stakeholders that showed interest in participating in the projects and researched the financing of these potential project stakeholders. The companies listed below have all shown interest in bidding for the concession.

Bolsonaro government signs contracts for the Arco Norte, a transport corridor that crosses vulnerable areas of the Amazon. Ferrogrão is the most controversial
2022-05-19 | Brazil | Diálogo Chino

The Environmental Impacts of the Ferrogrão Railroad

Hands off the Amazon!

Roadmap for Sustainable Infrastructure in the Amazon

The Ferrogrão Project began in 2012, with the Federal Government’s Logistics Investment Program (PIL). Its layout was designed by a group of companies operating in the grain sector comprised of Amaggi, ADM, Bunge, Cargill, Dreyfus and Estação da Luz Participações (EDLP).

In 2014, the Ministry of Transport initiated the preparation of technical feasibility studies for Ferrogrão and the first version of these studies were presented by EDLP in 2015. In 2016, a revised a final version was delivered, and it was announced that, along with 30 other projects, the project would be auctioned in 2017. The public hearing to receive feedback on the technical studies was held in 2017 and feedback received included concerns of environmental, societal and cultural matters related to the project.

The Tribunal de Contas da União (TCU Federal Court of Accounts) started the assessment of studies submitted by potential investors and financiers for the project on 10 October 2020.

Although in March 2021 the Supreme Federal Court ordered all EF-170 processes to be suspended, the project remains a top priority for the Bolsonaro government, as shown by its the government’s recent efforts to attract new investors for the project and the recently created legislative norm on railway projects, which aims at pushing EF-170 forward.