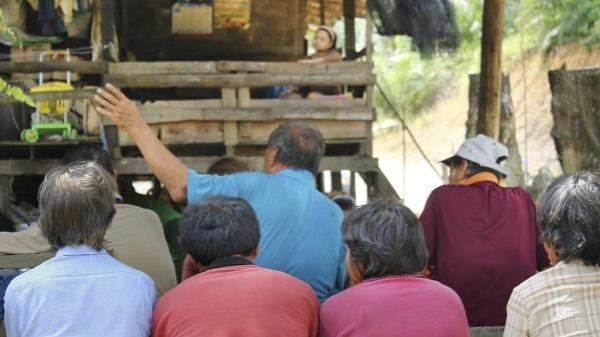 Indigenous people in Borneo have fought for their rights against international companies for decades. Photo: Swedwatch

Scandinavian banks invest hundreds of millions of dollars in companies that are linked to violations of indigenous peoples’ rights in Borneo. A new report from Swedwatch and Fair Finance Guide Sweden shows that the banks fail to comply with their own guidelines as they have not taken sufficient steps to respect the rights of indigenous peoples.

A new investigation shows that Scandinavian banks are investing hundreds of millions of dollars in companies linked to violations of indigenous peoples’ rights and the deforestation of rainforests in Borneo. The report Silent Approval is launched in conjunction with the Swedish premiere of the documentary film The Borneo Case, which shows the struggle of indigenous peoples in Borneo for their rights to be respected.

The report Silent Approval is based on an extensive field study in Borneo. It examines the impacts of four companies on indigenous peoples’ rights and links to seven Scandinavian banks. The results of the study show that all the banks invest in several of the companies and that the banks have not acted responsibly. Some of the companies were also included in the ethical funds of the banks.

The destruction of Borneo’s rainforests has been going on for decades and has been referred to as one of the greatest environmental crimes of our time. Large areas have been destroyed and converted into palm oil plantations and mines, which has had severe impacts on the indigenous communities on the island. Across Borneo, people have lost their traditional livelihoods and seen their communities destroyed. Those defending the environment and rights of the indigenous peoples have been harassed, threatened and even killed.
According to the United Nation’s Guiding Principles on Business and Human Rights, companies have a responsibility to respect human rights. Banks that invest in companies have a responsibility and opportunity to use their leverage to impact the situation on Borneo and set requirements for zero tolerance for violations of indigenous peoples’ rights.

The report Silent Approval - The role of banks linked to the crises faced by Borneo’s indigenous peoples and their forests has been developed by Fair Finance Guide and Swedwatch in association with Fair Action and the Swedish Society for Nature Conservation. The documentary film The Borneo Case will be premiered in Sweden in conjunction with the report.