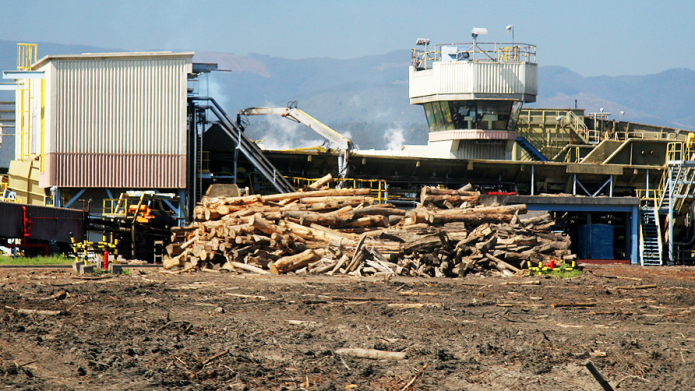 The project also includes a new forest biomass-fuelled power plant and a Power Transmission Line which will provide a maximum of 166MW of surplus energy to the Central Interconnected System (SIC), as well as a wind power park with 82-123MW capacity and a new tree nursery.

This project is problematic because it will increase the demand for timber, and therefore it will lead to the expansion of plantations in the region, further intensifying the strong impact these already have. It will also increase the emission of toxic compounds, such as dioxins and furans.

In 2018, Chilean pulp producer Arauco announced it would proceed with its MAPA project, which includes building a new pulp mill line at its Horcones mill. This will intensify the social and environmental impacts already caused by Arauco's plantations. It may also further fuel the conflict between forestry companies in general and the Mapuche people, over access to land. Furtermore, the additional plantations required to feed the mill will increase the risk of wild fires.

International banks and other financial institutions should refrain from providing funds or support for the construction of the MAPA project, until Arauco transparently shares:

The MAPA project is expected to increase the demand for wood fibre and therefore lead to the expansion of monoculture pine or eucalyptus plantations in the region. These plantations are already causing tense land conflicts, impacting water availability for nearby communities, and they enable wild fires. Furthermore, the project is expected to cause water and air pollution. The wastewater will be discharged into the sea. Local fishermen already complain about a reduced fish stock because of the wastewater from the Arauco I and II lines, and they expect the impacts to worsen with the Arauco III line.

Land conflicts Arauco has a long history of involvement in land conflicts in Chile, which dates back to the 1970s, when the military dictatorship decided to distribute hundreds of thousands of hectares to plantation companies, without consulting or compensating the traditional owners of these lands, many of which were Indigenous Mapuche people.

After Chile returned to democracy, the Mapuche have started to revendicate the return of their lands. This has led to strong tensions between the Mapuche and plantation companies including Arauco, to which the government responded by militarizing certain regions, leaving little space for dialogue. The MAPA project will lead to an expansion or more intense use of its plantations, which is expected to intensify these conflicts.

FPIC There are 35,000 indigenous people living in the village of Arauco, yet the Environmental Impact Assessment for the MAPA project states that no indigenous communities will be affected by the expansion project. Five Mapuche communities that live nearby the Horcones complex took the government to court for approving Arauco's flawed EIA that did not obtain the legally required FPIC.

Evictions The militarization of the land conflicts has caused a number of human rights violations. In April 2019, for example, special police forces used tear gas to try to evict mapuche families of the comunity lof Rali Cura from their ancestral lands. They were acting on an eviction order requested by Forestal Arauco, which according to the community members was not signed by an authorised judge. In March 2018, a Mapuche family was evicted in Los Alámos, by special police forces and Arauco employees, which destroyed their houses.

Plantations The Environmental Impact Assessment for the MAPA project did not take into consideration the impact of the plantations that the new pulp mill will require. Since the capacity of the Horcones will more than double, either the area of the plantations will need to increase, or their productivity.

The expansion of plantations often goes paired with deforestation and loss of biodiversity. But Arauco seems to be planning to improve the productivity of its plantations, by substituting a large part of its pinus plantations by the faster growing eucalyptus. This will especially increase the impact on both ground and surface water levels, as the faster growing eucalyptus consume more water. Dryer areas are in turn more susceptible to fires.

In January 2017, a wave of fires devastated an more than 600,000 hectares of scrubland, plantation forests, agricultural land, native forests and homes devastated in what is thought to be the worst episode of forest fires in Chile’s recent history. It affected thousands of people. Eleven people died in the blazes, and thousands of people were evacuated from their homes. Entire communities were razed to the ground. Chile’s capital, Santiago, several hundred miles away, was shrouded in haze. In 2019, three regions in Chile declared the ‘state of catastrophe’ because of wild fires.

Pollution The discharge of wastewater from the mill into the sea is likely to have a negative impact on the local marine biodiversity.

Fibre sourcing Charles Kimber, corporate and financial manager of Arauco, has stated that to supply MAPA, they might use part of the 7.5 million cubic meters of euclyptus chips that are now being exported to China every year. If this happens, China is likely to look for new sources of wood chips, to meet its demands, creating pressures on other regions.

Confronting the impacts of the plantation forestry model in Chile

MAPA "has no turning back": Arauco has already acquired machinery that costed millions
2018-10-16 | Chile | Tvu.cl
blog
external news
our news

Detailed case analysis: the eviction of the Paine Antilea Familiy (in Spanish)
2018-03-31 00:00:00 | Chilean National Institute on Human Rights
other documents

EIA for the MAPA project

Resumen - articles about the MAPA project

In 2012 Arauco presented an EIA for the MAPA project. This EIA was approved early 2014. However, Mapuche communities that will be affected by the project sued the government over a lack of Free, Prior and Informed Consent procedures and for approving a fundamentally flawed EIA. The communities eventually lost after appealing to the supreme court and Arauco obtained its environmental license in June 2017.

In July 2018 Arauco decided to go ahead with the construction of the MAPA project.