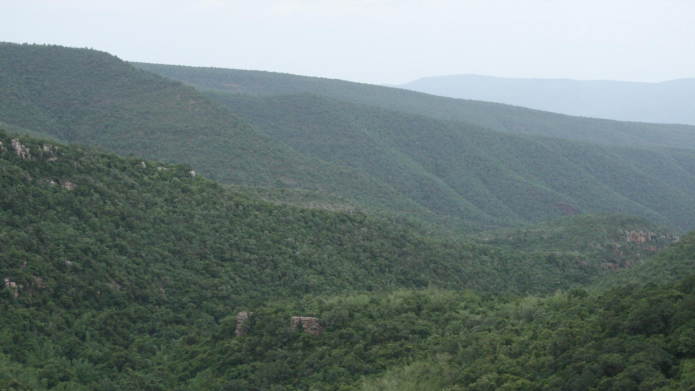 Forests in the Andhra Pradesh region in India, location of APP's newly planned pulp and paper mill. Photo: ShashiBellamkonda via Flickr (CC BY 2.0)

Driven by the growing demand for paper products in India, the Indonesian company Asia Pulp and Paper (APP) is planning to build an enormous new pulp and paper mill with a capacity of five million tons per year in Andhra Pradesh. In January 2019, the company signed a Memorandum of Understanding (MoU) with the local government for the mill, which is planned to be built in Ramayapatnam, in the Coastal Andhras Prakasam district. It would become the largest pulp and paper mill in India and one of the largest in the world.

Asia Pulp and Paper (APP) is planning to build one of the world's largest pulp and paper mills in India. This project is expected to have significant impacts on land use, the availability of water and food sovereignty of local communities with the effluent from the mill expected to impact fish and other marine life.

Investors should refrain from supporting this project until the company has:

Land conflicts and threats to food security By early 2019, the local government of Andhra Pradesh had already acquired 50% of the land needed for the mill in Ramayapatnam, and planned to acquire the rest in the following months. There is no information about any evictions associated with this land acquisition or about whether local communities have provided Free, Prior and Informed Consent (FPIC).

Much more land will be needed to provide sufficient wood fibre for the mill. In Indonesia, a mill of the same size would require around one million hectares of plantations, excluding set-aside areas required by law which could cover a further. In India the land requirement may be different but the mill would without a doubt require a huge extension of dedicated land.

According to media reports the new mill would affect 50,000 farmers. In Indonesia small farmers largely avoid producing wood for the pulp industry because it provides very low income, compared to alternatives such as producing crops for export.

Deforestation In 2018 the Indian government released a new draft National Forest Code, which, if approved, will open up government-owned forests lands to the corporate sector for development of tree plantations. The existing National Forest Policy protects forest dwellers and considers natural forests as a gene pool resource to help to maintain ecological balance, stating that "such forests will not therefore be made available to industries for undertaking plantation and for any other activities.”

The new Forest Code would transform natural “underutilized” forests into tree plantations under the guise of "reforestation". The new Code encourages partnerships between the government and industries to develop "forest plantations of commercially important species" on government-owned forest lands. Only a few months after the new draft Forest Code was released, APP signed the MoU with the Andhra Pradesh government. This may be a coincidence, but the Code clearly opens opportunities, facilitating APP’s access to fibre sources, while potentially degrading India’s natural forests and natural forest restoration opportunities.

Impacts on water availability and drought risk A pulp and paper mill with a capacity of five million tonnes per year, would consume and discharge about 50 billion litres of water annually. The timber needed to produce the pulp, would require even more water. Media reports mention that the plant will use timber from eucalyptus and subabul plantations. Eucalyptus is a highly water consuming tree that requires an average of 30 litres of water every day. In South Africa, when planted at a density of 400 trees per hectare, eucalyptus pulpwood plantations of two million hectares could absorb up to 25 billion litres of water. In areas surrounding the plantations, water level of wells would drop dramatically. Despite the fact that the climate and water cycle in Andhra Pradesh may be very different, the new mill will surely exacerbate the drought risk the region is already facing.

Subabul  (Leucaena leucocephala) is an invasive and aggressive colonizer of rural areas and disturbed vegetation in many parts of Asia.

Wastewater, sea pollution and impacts on the fisheries sector Even if the mill deploys the most efficient technology for Elementary Chloring Free (ECF) bleaching – the same standard APP used in its recent new mills - given its dimension and scale, it would still discharge unsustainable amounts of chlorinated organic substances (absorbable organic halide or AOX) into the Bay of Bengal, affecting the marine ecology and fish stocks (and therefore fishermen). The most advanced EFC technology is expected to lead to concentrations of AOX in effluent of about 0.05 - 0.1 kilograms per tonne, which is low compared to older and less efficient plants, but would still be expected to have significant impacts due to the sheer scale of the effluent resulting from the project.

For financiers of Asia Pulp and Paper, the company which is planning the Andhra Pradesh pulp mill, please visit the financiers section of APP's profile here.

Asia Pulp and Paper is planning a massive expansion of production in India. Where will the timber come from?