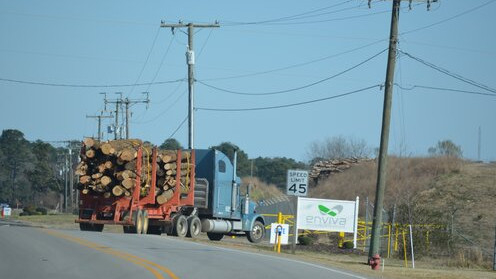 Whole trees being transported to Enviva pellet mill. Photo: As You Sow

Enviva is a US-based company and the world's largest producer of industrial wood pellets. It operates ten manufacturing plants across six Southeast US states and six terminal facilities where they ship pellets worldwide. It’s three biggest mills, located in Ahoskie, NC, Northampton, NC and Southampton, VA had a combined production capacity of 1.4 million metric tons per year when constructed, but now have an annual production capacity of over 1.9 million metric tons since receiving authorisation permits to expand two of the mills. The company makes and exports wood pellets to utility companies in Europe like RWE in the Netherlands, Drax in the UK, and Orsted in Denmark. Enviva’s newest corporate office was opened in Tokyo, Japan as the company seeks to serve the growing biomass industry in Japan and South Korea.

As a pellet manufacturer, Enviva sources wood from native hardwood forests in an area designated as a global biodiversity hotspot in the southeastern United States. In addition, large diameter wood known to be high in carbon has been found in Enviva's supply chains. Through destructive logging practices, Enviva is contributing to the destruction of irreplaceable forests and increasing greenhouse gas emissions.

Environmental injustice: Studies have found that a wood pellet manufacturing plant in southeastern US is 50% more likely to located in a so-called “Environmental Justice community”, defined as a county where the poverty level is below the state median poverty level and at least 25% of the population is Black, Indigenous, or People of Colour (BIPOC). Most of Enviva’s pellet plants are sited in locations where the wood dust, air pollution and noise from their operations disproportionately affect black and low-income communities, who are often already exposed to high levels of industrial pollution and social deprivation. In Hamlet, North Carolina, there are only 6,500 residents and five polluting companies, including an Enviva wood pellet plant.

Air pollution: A 2018 report by the Environmental Integrity Project found that 21 wood pellet mills exporting to the EU, including those operated by Enviva, emit thousands of tons of particulate matter, carbon monoxide, nitrogen oxides (smog), and volatile organic compounds per year. These are all associated with a range of illnesses, including respiratory and heart disease and cancer. The report also finds that many of these wood pellet facilities have violated air permit limits and highlighted frequent fires and explosions caused by wood dust combustion at pellet mills.

Not only does the demand for wood pellets to burn for energy impact forests, but it also excerbates the climate crisis. Burning biomass from forests creates more carbon emissions than burning coal, per unit of energy, and the increased carbon dioxide concentrations persist in the atmosphere for decades. In addition, forests offer crucial protection from extreme weather events such as floods and droughts that are becoming increasingly common due to climate change, but the demand for wood pellets for energy is driving forests across the US to be cut down.

Destructive sourcing practices: Since 2013, multiple investigations have found that Enviva’s pellet mills routinely source whole trees and other large-diameter wood rather than “residues” or “waste” from forests, and that many of these trees are taken from clearcuts of ecologically valuable and highly biodiverse hardwood or wetland forests. These forests are located in the North American Coastal Plain global biodiversity hotspot and provide key habitats to many at-risk species, purify the air and improve water quality, and store large amounts of carbon.

Impact on wildlife and biodiversity: The North American coastal plain where Enviva harvests timber has recently been recognised as a global biodiversity hotspot. The Southeast is unique in having more than 1,500 endemic vascular plants (species found nowhere else in the world) while experiencing more than 70 per cent habitat loss. Intensive logging is a major threat to biodiversity. The production of wood pellets uses more wood than other types of logging, which means that less wood is left on the ground to support forest regrowth. This affects soil health and leads to a significant loss of habitat for wildlife. Forest-dependent species such as certain birds depend on dead and old trees for their habitat. Removing trees, branches, roots and dead wood from forests for biomass destroys habitat, including nesting and breeding sites, for thousands of bird species. Once a forest has been cut down, it takes decades, if not centuries, for it to grow back to its original ecosystem productivity. Moreover, it takes decades to centuries for a regenerating forest to regain its ecosystem productivity once it has been cut down.

Wood biomass is associated with high rates of deforestation as well as monocultures of various crops. There is a growing body of evidence that shows the connection between deforestation and an increased risk for disease outbreaks and pandemics. For example, monocultures like eucalyptus plantations reduce biodiversity leaving species like rats and mosquitoes, which are more likely to spread dangerous pathogens, to thrive. This biodiversity decline results in a loss of natural disease regulation and poses a risk for human, animal and environmental health.

In November 2022, a class action lawsuit was filed against Enviva, accused of making false and misleading statements about the environmental sustainability of their wood pellet production and procurement, as well as misleading statements about their finances. The suit comes after a Blue Orca Capital report condemning the company’s greenwashing of its polluting activities, which even receive European subsidies.

On October 12, 2022, Blue Orca published a report which alleged, among other things, that satellite imagery indicated that, in many instances, Enviva is “procuring wood from the widely condemned practice of clear-cutting,” or removing full swaths of forest, and further revealed that two former senior Enviva executives “unequivocally stated that [the Company] sources wood from clear-cutting.” The activist investment firm stated that Enviva is "flagrantly greenwashing its wood procurement" and therefore shorted its stockholding. On this news, Enviva’s stock fell as much as 20.5% during intraday trading on October 12, 2022. Enviva has publicly denied the findings of the report. Following the report and on behalf of investors, the law offices of Frank R. Cruz announced that they would investigate Enviva's possible violations of federal securities law.

The banks listed below provided credit (loans and underwriting) to Enviva and/or its subsidiaries between 2016 and 2022. In addition, those commercial banks that hold over USD 1 million in Enviva shares have been listed below. For a list of Enviva's top shareholders, see here.

There are no projects active for Enviva now.
on record

Whistleblower: Enviva claim of ‘being good for the planet… all nonsense’

Burning forests in the name of clean energy? How banks are failing to exclude the harmful wood biomass industry from finance

WHERE DO BIOMASS COMPANIES GET WOOD?