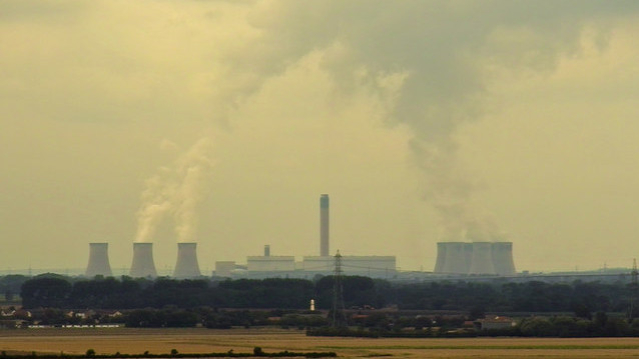 Drax Group PLC is a power generation business. The principal downstream enterprises are based in the UK and include Drax Power Limited, which runs Drax Power Station, UK’s largest biomass power station. The Group also runs an international biomass supply chain business, with several pellet mills in the southern USA and Canada.

In 2019, Drax announced its ambition to become a "carbon-negative" company by 2030, by capturing up to 16 million tonnes of CO2 per year from its biomass units, using BECCS (Bioenergy with Carbon Capture and Storage). It is extremely unlikely that Drax will be technologically able to fulfill this promise, but there is a risk the group will use it to secure more funds to keep burning biomass beyond 2027, when its current subsidies will run out.

Biomass is classified, and subsidised, by the UK government as renewable energy, but in reality it harms the climate, biodiversity, forests and communities. Drax is a heavy promoter of biomass electricity and the false climate solution of Bioenergy with Carbon Capture and Storage (BECCS).

Environmental injustice: Wood pellet production increases air pollution, wood dust, heavy traffic and noise. Pellet mills and export facilities are often sited in communities of colour and lower income communities - who are often already exposed to other forms of industrial pollution and social exclusion. In February 2021, Drax’s Amite pellet plant in Mississippi was fined a record $2.5 million for having violated the state’s air permit for years - however, this sum is roughly equivalent to the GBP 2 million Drax is receiving every single day in 'renewable energy' subsidies from the UK government. In the Southeastern USA, Drax’s main pellet sourcing region, wood pellet plants are 50% more likely to be located in environmental justice communities (see here and here), i.e. counties where the poverty level is above the state medium, and at least 25% of the population is non-white.

Forest destruction: Drax burns the equivalent of 138% of the UK’s total annual wood production. Its main sourcing regions are Southern US, Canada and the Baltic States.

Drax' biggest wood pellet supplier is the world's biggest pellet producer, Enviva. Enviva has been heavily criticised for regularly sourcing wood from clearcut coastal hardwood forests in the Southern US. As well as being home to black bears, salamanders and many bird species, these forests offer crucial protection from extreme weather events such as floods and droughts that are becoming increasingly common. While Drax and Enviva claim to use 'waste wood' and 'forest residues' for wood pellets, these terms refer primarily to the economic value of wood, and pelletising of whole trees is standard practice.

Drax also owns three pellet mills in the Southeastern US, with wood sourced mainly from monoculture pine plantations. Across the region, such plantations have been expanded at the expense of the rich forest ecosystems that are being clearcut. According to a study commissioned by the Southern Environmental Law Center, burning pellets from US pine plantations in the UK will be worse for the climate than the UK’s average electricity for a period of at least 40 years.

In 2021 Drax acquired Pinnacle Pellets, a major pellet producer whose mills are located next to some of the last stands of primary forests in British Columbia, Canada, home to endangered wildlife like caribou and among the most carbon-rich in the world.

In Estonia and Latvia, logging volumes have been increasing sharply as demand for wood, including for wood pellets for exports, has gone up. Logging is happening even in the few remaining old-growth forests, destroying habitat of rare and endangered species including Capercaillie, Black stork and Hazel grouse. In Estonia, the number of forest birds is declining by 50,000 breeding pairs year on year.

Climate change: Drax power station is the UK’s single biggest emitter of CO2, with around 16 million tonnes of CO2 emitted in 2020, 13 million tonnes of which were from burning wood. Drax claims that carbon emitted from burning wood can be ignored because new trees will eventually absorb the same amount of CO2. This flies in the face of science. In February 2021, 500 scientists wrote to world leaders, warning: “As numerous studies have shown, this burning of wood will increase warming for decades to centuries. That is true even when the wood replaces coal, oil or natural gas.” In the same month, 87 scientists and economists warned the UK government: “Forest bioenergy is adding increasingly large amounts of carbon dioxide to the atmosphere and reducing the capacity of forests to absorb atmospheric carbon dioxide, making it more difficult to reach net zero carbon as the stated goal for limiting global temperature. Adding carbon capture and storage (CCS) technology to a bioenergy plant does not resolve this issue.” In October 2021, rating agency S&P removed Drax from its Global Clean Energy Index for failing to comply with their carbon standard.

Flawed claims around Carbon Capture and Storage: In 2018, Drax partnered with a start-up company called C-Capture to trial capturing one tonne of CO2 a day from biomass burning, financed by millions of pounds in government grants. This project failed, and, in March 2021, Drax described C-Capture’s technology as not proven. In June 2020, Drax announced a new carbon capture partnership with Mitsubishi Heavy Industries (MHI). The aim is to test the suitability of two MHI solvents for capturing carbon. One of them was previously used in a failed and abandoned carbon capture project in Texas, which had involved carbon capture from coal combustion. In July 2021, Drax and MHI stated that the trial – involving the capture of 300 kg of CO2 a day subsequently released into the atmosphere – had been successful and would form the basis of a planning application for installing carbon capture equipment in two of Drax’s four biomass units. However, no actual results from the trial have been published.

Beyond this very small and unpublished trial, CO2 capture from wood combustion has not been demonstrated anywhere in the world. On a nine-stage technology readiness level ladder, the CCS from wood combustion technology has reached stage 4 or 5. Stages 5-8 are considered essential prior to full commercial application. This makes it all but inconceivable that Drax would be able to operate one, let alone two of their large biomass units with full carbon capture and storage from 2027/28, as they propose.

A new study, commissioned by SELC, clearly shows the environmental and climate harms the biomass energy industry inflicts on forests in North Carolina and Virginia. For the study, researchers from Clark University used satellite images to evaluate the amount of forest cover lost near four wood pellet plants owned by Enviva, the largest wood pellet manufacturer in the world and supplier to Drax in the UK. Researchers found that logging in the sourcing areas near the four pellet mills sharply increased after Enviva began operating the plants. In 2019, Forest Service data shows that more than 6.6 million green tons of forest were cut for bioenergy or fuelwood in these areas. That’s the equivalent of 71,000 acres of forests cut, with Enviva being a primary user of this wood. Furthermore, the study showed that from 2016 to 2018, Enviva’s Ahoskie, Northampton, and Southampton pellet mills consumed nearly half of the wood from hardwood forest clearings in the sourcing area. Cutting forests at this scale can degrade water quality for communities downstream and destroy wildlife habitats, further threatening at-risk species. For more information see here.

In its Annual Report (2020), Barclays, Royal Bank of Canada and JPMorgan Chase are mentioned as Drax' banker (Barclays) and brokers.

There are no projects active for Drax Group now.
on record

Burning The Forest For The Trees

The popular method of burning biomass is not as good as it looks—and can produce even more CO2 than burning carbon.
2022-01-12 | The American Conservative
blog
external news
our news

Why is BC allowing the logging of primary forest for pellets?

Protester climbs on top of train to Drax power station

The battle over burning: why Drax is being accused of “greenwashing”

The UK power station Drax has been lauded for ditching coal in favour of biomass, but lawyers are questioning its climate and nature protection claims.
2021-10-27 | The New Statesman
blog
external news
our news

The UK Must Stop Subsidizing Its #1 Climate Polluter: Drax

Drax PLC's carbon capture claims not based on any real-world evidence, company reveals to campaigners

Responsible sourcing - a policy for biomass from sustainable forests

Net Zero and Beyond: What Role for Bioenergy with Carbon Capture and Storage?

A statement by scientists and economics on BECCS from forest biomass

Understanding the cost of the Drax BECCS plant to UK consumers