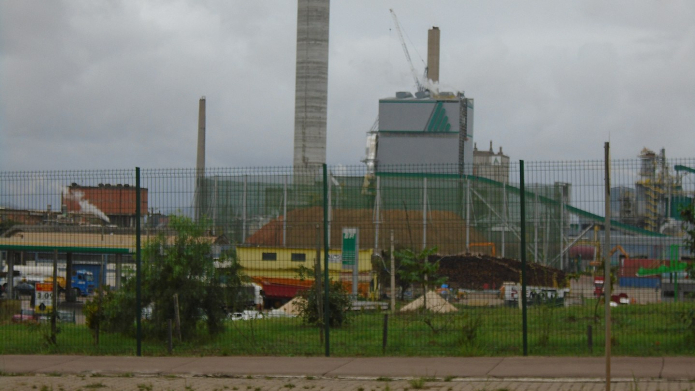 CMPC (Compañía Manufacturera de Papeles y Cartones) is a pulp and paper company in Santiago de Chile. Together with Arauco, it is one of the two biggest plantation companies in Chile. The company exports its products globally and operates in four business areas: wood, pulp, paper & paper products and tissue. The company’s forest assets are located in Brazil, Chile and Argentina, and its manufacturing operations are located in Chile and Brazil. CMPC’s celulose plants in Sante Fe and Laja are powered by biomass plants. CMPC Celulosa produces wood pellets and other wood biomass in several Latin American countries and exports them to Europe and Africa.

CMPC has several large monoculture plantations in Chile for its pulp and paper production, which have harmful impacts on biodiversity and the climate. In addition, the company’s reliance on biomass power plants puts further pressure on ecosystems and the climate. CMPC and its subsidiaries have been involved in numerous violent conflicts with the Mapuche Indigenous Peoples.

Violent conflicts: CMPC's activities in Chile are linked to numerous conflicts with the Mapuche population as well as murders and other violent incidents causing political and social conflicts. CMPC has a long history of involvement in land conflicts in Chile, dating back to the 1970s. At the time, the military dictatorship distributed hundreds of thousands of hectares to plantation companies, without consulting or compensating the traditional owners of these lands, many of which were Indigenous Mapuche people. Local groups such as Arauco Malleco Coordination (CAM), Lafkenche Mapuche Resistance (RML), Weichan Auka Mapu (WAM) demand the return of the land occupied by CMPC. According to Mapuche activists, Forestal Mininco, the forestry arm of CMPC, hired paramilitary forces to face the demand of land restitutions by Indigenous communities, intensifying the conflict.

Indigenous lands: With the support of the military dictatorship, forestry companies like CMPC and Arauco acquired large tracts of land in Chile destined to become monoculture forestry plantations. The industry is ever-growing and the impacts of Indigenous territories continues. The CMPC holding company alone owns 170,000 hectares of the approximately 450,000 hectares in the Araucanía region in Chile. Tree plantations in the traditional Mapuche territory account for an area three times greater than the Indigenous lands recognised by the state. Most of the tree plantations have been established on traditional Mapuche lands. The communities affected by this industry are claiming their right to tenure over the lands occupied by the plantations, which were usurped from them both during the colonial era and following the military coup of 1973. The conflicts about land rights have resulted in the criminalisation of community members and leaders who have occupied disputed landholdings.

According to the forestry commission of the Coordinating Committee of Mapuche Territorial Organizations and Identities, “the territorial conflict with the forestry companies is a fight for survival, for rights, dignity, recognition, and the possibility of autonomous development. For the coordinating committee, stopping the expansion of the forestry sector is also a means of preventing this activity from provoking even greater impoverishment, environmental damage and cultural deterioration for the Mapuche people and vast sectors of society.”

Loss of forests caused by plantations: Chile is  home to the second largest coastal temperate rainforest on the planet. Over half of these rich coastal forests have been cleared, according to the World Resources Institute, in a process that has accelerated over the last half century. Timber plantations expanded by a factor of ten between 1975 and 2007. They now occupy 43% of the Southern-central Chilean territory.

The expansion of industrial plantations at the cost of natural forest is not reported as deforestation, because the Food and Agriculture Organisation (FAO) of the United Nations includes tree plantations in its definition of forest cover. However, this land use change has dramatically impoverished the rich biodiversity that once shaped these regions.

Impact on water tables: The land often populated by the Mapuche people is progressively drying out, because the industrial plantations that surround it distort the natural functioning of the water table. For example, eucalyptus requires an average of 30 litres of water every day. When planted at a density of 400 trees per hectare, a plantation may absorb 12,000 litres per hectare every day. Pine requires less, although like other plantation species, it still requires large amounts of water, as well as nutrients, to maintain its rapid rate of growth. Therefore monoculture tree plantations, especially at industrial scale, affect entire landscapes, impacting on the water table, reshaping flora and fauna and modifying soil quality. Moreover there is no such remedy for the water shortage of natural forests. This is concerning, since the degradation of the water table is happening in conjunction with higher temperatures caused by global climate change.

Forestal Mininco, the forestry arm of CMPC,  has made use of the water of the surrounding Mapuche communities for over 14 years by diverting the channels for irrigation of their eucalyptus and pine plantations. The Mapuche people blame this for their continuous severe droughts and consequent loss of their crops, alongside the remaining natural forests.

Drought and forest fires: A further threat to natural forests, caused by industrial tree plantations draining the land and exacerbated by climate change, is the growing risk of forest fires. Scientists have found that non-native pine and eucalyptus forests planted to supply pulp and timber mills in central Chile are contributing to the massive fires. Other studies have indicated that Chile’s plantations are affecting anthropogenic climate change, the growing area of urban-rural interface (areas where housing and vegetation formations converge or mix) and the increase in forest plantations of species of high flammability, among others” and that “the conversion of land to rapid growth plantations increases the risk of fires.”

Biomass use: CMPC operates multiple biomass power plants like the Santa Fe Biomass Power Plant in Bio Bio, Chile. The company’s subsidiary, CMPC Celulosa, also produces wood pellets and other wood biomass in several Latin American countries and exports these products to Europe and Africa. The production and combustion of wood biomass is associated with numerous social and environmental conflicts. Wood biomass is anything but carbon neutral and ecologically sustainable. In fact, biomass combustion burns more CO2 per unit of energy than fossil fuels, further fueling climate change. In addition to deforestation to produce wood for burning, large forested areas are also being burned or cleared to grow crops as biomass. The demand for woody biomass contributes to land grabbing, which threatens the rights, interests, and livelihoods of Indigenous Peoples and local communities.

Revision of the MUFG Environmental and Social Policy Framework

Environmental and social management policy for financing and investment activity

The Chilean pulp industry, which includes CMPC and Forestal Mininco but also its competitors, is heavily dependent on governmental support in the form of favourable legislation and subsidies. A large part of this support was provided by the 1974 Decree 701, which promoted the expansion of plantations through generous land distribution and large subsidies. The subsidies covered 75% of the production costs of plantations and it exempted the sector from taxes. This Decree was extended several times until 2015.